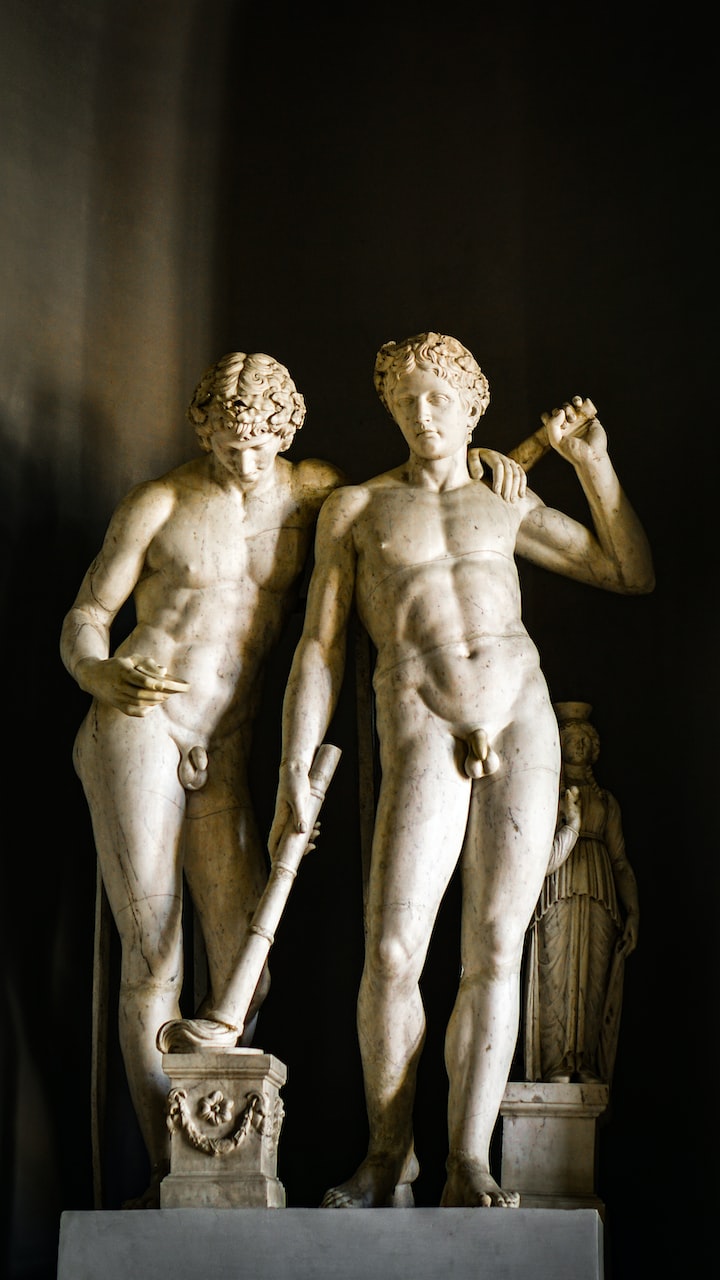 Photo by Mark Tryapichnikov on Unsplash

There weren't always dragons in the Valley. In fact, they used to only dwell inside the evil hearts and minds of people. Trapped there, constantly at war with the spirit of mankind.

Bellerophon remembered the time before the dragons were unleashed. Before the evil warlock somehow used Hekate's magic for evil. She punished him by sending him to Tartarus, but the dragons still remained.

Bellerophon had his own, personal dragon to reckon with. A large beast, with fangs, and three heads. Spawned by his father's own unbridled, unlawful, and evil intent. This dragon haunted him every step.

No matter how hard he tried, no matter how much he fought and pushed back against it, the sins of his father still lingered over him. It was there, in his very name. Etched upon him for all eternity.

It wasn't true though. Only recently had he come to realize this truth. His whole life, his whole childhood, he was convinced that he was the killer of his brother, Belarus.

The Oracle, speaking on behalf of the goddess Athena, told him otherwise. She was the one who told him who his father really was. It was not Glaucus. It was not even a man.

The man claiming to be his father was actually the warlock. He sacrificed his true son. His wife wept so much that the sea god sent her a gift. A child in a basket. But, the king was enraged, convinced the queen had cheated on him. So he killed her.

The child, however, would not die. He tried strangling it, poisoning it, and even threw it over a cliff. The child wouldn't go anywhere. So, the king decided to use this miraculous child for his own gains.

He knew that this child must be the son of a god, but that did not concern him. Rather, it encouraged his scheme. A powerful son who would have no will of his own.

Bellerophon was told by the warlock king that he had killed his mother and brother while still an infant. The boy was a monster and only he, the king, could prevent him from destroying himself and those he loved.

"You should've been put to death, my son," the king said anytime he lashed out against his father's abuse. "You know how much I love you since I'm willing to spare your life, despite the whole kingdom wanting you dead. They know what you've done. But I've turned your power into a vital tool of the city's survival."

Bellerophon, chained to the cellar wall of his father's palace, would have to listen to the king every time he rebelled. Every time he stood up for himself, the father's hammer came crashing down. The beatings and physical abuse hurt, but nothing stung quite like the emotional wounds caused by his father's words.

He was a killer. His father would "unleash" him every time the city had an invasion. Bellerophon was a killing machine, a beast, a monster. And when he was allowed to fight he felt free and powerful, but only while it lasted. Afterwards, he was locked up again.

However, as Bellerophon lay in the cell that evening, something different happened. His chains shattered, and the cell doors opened. Bellerophon looked startled and slowly crept into the prison corridor. He was beneath his father's palace and he knew he could escape through the sewers.

Although he didn't know how this happened, he couldn't wait to find out. He quickly slid under the drainage system and held his breath. When he finally resurfaced he was safely outside his father's palace.

Luckily, it was early dawn and he saw some guards on the battlements looking into the distance. It didn't seem like they saw him, so he decided to stay in the water while he inched his way to the reservoir which led out to the sea. He would rather take his chances out at sea than be stuck here.

He swam like this for three days, only coming out at night to hide in forests along the shore. Whenever ships saw him, they thought they saw a merman or mermaid, because he rapidly descended into the depths of the ocean. Many feared the ocean, but not Bellerophon. The sea always seemed like freedom to him, and now it really was.

On the third day, however, he was no longer free. Some fishermen caught him in a net and talked about what they'd do with this crazy fish man? What a strange creature who lives in the sea, yet is clearly a man. They soon regretted this mockery.

As the fishermen slept that night, Bellerophon managed to wrangle out of his bonds. Just as he was about to jump back into the sea, a monstrous sea serpent leapt out of the water at him. Letting out a cry in fear, the fishermen awoke right away. When they saw what happened they simply assumed that he'd gotten out and rushed to recapture him.

When they approached the edge of the boat, though, one of the fishermen was swept away in the jaws of the massive creature. The men stood back as they were picked off the deck by the snake and dragged away. When only one of them remained, Bellerophon decided to help. He grabbed one of the planks and ripped it out of the deck with his bare hands and swung it at the serpent.

With a cry, the serpent fell beneath the waves. Bellerophon gazed at the man, who fell at his feet.

"Who are you?" He asked the whimpering man.

“You are the prince here?” Bellerophon asked. “Tell me, will you take me to your father? I wish to make myself his servant.”

“The servant of my father?” Ganymede asked. “I do not believe you want that. He is sickly and our kingdom is plagued by a monster.”

“Take me,” Bellerophon insisted. “I am a trained killer and I wish to be of service to your father in killing this monster.”

Finally, Ganymede consented and brought the odd man to the court of his father. Bellerophon noted the degraded state of the kingdom when he arrived. He swore to himself that he would bring this kingdom back to its former glory.

“This monster,” Bellerophon asked Ganymede as they entered the city, “may I ask why a man such as yourself has not attempted to kill it?”

“My father banished me,” Ganymede confessed. “I refused to be with the woman he gave me for a wife.”

“Why is that?” Bellerophon asked.

“Women are not for me,” Ganymede said, smiling at Bellerophon. “I prefer men such as yourself.”

Bellerophon blushed at his words and looked away. Having spent his life in his father’s dungeon, he’s known only horror without love or pleasure.

“Ganymede!” King Proitos exclaimed when the man approached his throne as he sat in the putter courtyard. “Why have you come? You know I’ve disowned you.”

“Father,” the young man knelt down. “I beg your pardon, but I’ve brought you this man to slay the beast which terrorizes our kingdom. I beg you, let us stay and we will save your city.”

Proitos seemed skeptical, making Bellerophon wonder if he’d ever accept such a man as himself. However, he seemed to be impressed by his form and stretched out his ringed hand for Bellerophon to kiss and swear his allegiance.

He provided Bellerophon with a room and food under the promise that the following day Bellerophon would engage in a fight with the monster. As the young man lay awake in bed wondering about the coming day he heard a loud cry for help.

Instinctively, Bellerophon jumped up, grabbed his knife, and ran outside. He followed the screams into the temple of the Goddess Artemis, the patron deity of the city. Someone was crying out for help and he felt desperate to save them.

Upon entering the temple Belleropphon’s eyes fell with horror on the form of his warlock father defiling the young Ganymede. He was in the process of the act, inflicting pain on the young man as Bellerophon entered.

“Unhand him!” Bellerophon screamed in horror. He’d never known love or anything of the sort, but seeing his father in the act of harming the only person who’d ever expressed interest in him made him panic. He wanted to chop his father into a dozen pieces.

“I knew that if I found your heart, I’d find you,” his father growled. “Now, come back or I shall destroy this man’s virtue.”

Ganymede was pale, deprived of energy, and limp on the ground as Glaucus defiled him. Bellerophon felt his head pound. He would destroy his father, and all the dragons and demons he brought into being through his vile acts.

In short, I've always loved the story of Bellerophon. In my mind, he's the least known and most overlooked of the Greek heroes. Here I wished to emphasize the real origin of dragons and demons in the world: Our own hearts.

I named the son of Proitos "Ganymede" in honor of the young man who was defiled by the king of the gods, Zeus. I felt he deserved a true love story to call his own, where he could find a man who wasn't perfect, but who was good. A man who loved him.

I'll continue this story, regardless of whether it wins the contest or not. I want to celebrate the rich and beautiful same-sex romance many Greek stories have but are too often ignored and censored.

The rape of Ganymede spawns the birth of the monster Chimera. But, it is not the end of the story. Rather, it is the beginning.