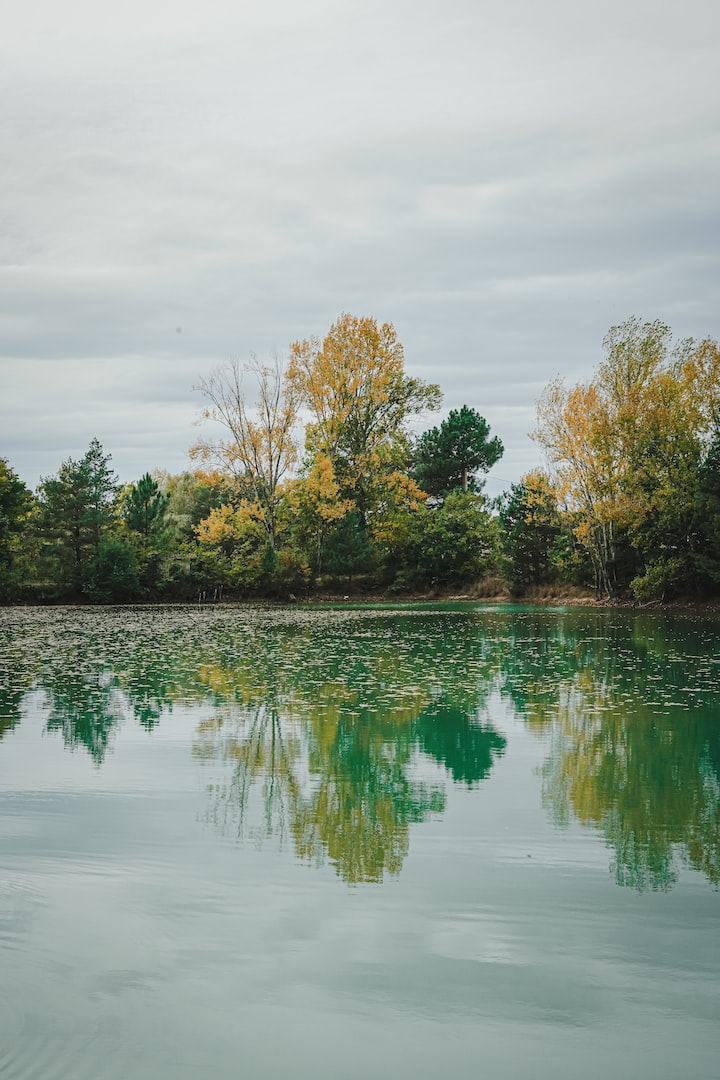 Photo by Baptiste Buisson on Unsplash

Ringlets formed and reflected one after the other as the sunlight beamed across the lake on my grandparent’s property. My grandfather had just cast his first stone. We both watched intensely as the smooth flat granite moved across the water lightly touching down before it bounced to another surface and formed more mirrored rings. The autumn leaves covered much of the water and rocks. Even though it was only just after six in the evening the sun was already setting, as November was bringing its shorter days. The brisk air spoke of change, and light caressed each rock that skipped to a final landing.

I waited until the stone made its last splash before I uttered a word. I knew quiet was key to loyal skippers as Gramps had always been. There was silence around us except for some pigeons who could be heard cooing. The stillness was something I had become accustomed with Gramps when casting, I did however make sure to count as that was the whole point. As I watched the final ring appear, I turned to him, “Twelve is not bad you might be able to get back to the tournament,”

“Ah, don’t butter me up. My days at Mackinac Island are over!” He waved his hand in disgust, but with a grin that said he enjoyed the compliment. Mackinac Island in Michigan held a stone skipping championship every year that he always looked forward to.

“Not bad, not bad at all,” my grandfather clapped and gave me a high five.

While he still had a smile on his face, I decided to bring up the move.

“So how do you feel about tomorrow, and going to Peachtree Pines?” I turned to catch him rolling his eyes. My gramps was never one to hold back his true feelings. He wasn’t a man of many words, but the ones he said could be blunt, brutal and many times inappropriate.

“She has driven me crazy with all this baloney. Since when did an indoor swimming pool and activities become so important. Don’t even get me going on that stupid name, Peach Tree Pines Independent Living. Are we moving to a fruit stand?” He shook his head as he looked for more stones. The “she” he was talking about was my grandmother who was up in the house packing the last items with my partner, Joaquin. He paused and then continued, “But you know she has been so excited, I told her OKAY, we will do this, but I am not playing Bingo and I will have time at the water at least once a week. I think she started packing the minute I said that.” He looked up and smiled. “This place has become too much for us both to keep up. All the years I’ve been married to her, I don’t think she has been giddier about anything than this move. So, it’s time. That’s how it goes, eh?”

He was still grinning when he looked at me before throwing another stone. “So, you and him?” As he pointed to the house.

“Yes, Joaquin? Yes, me and him.” I responded. I had only come out to my grandparents last month. My grandmother had been thrilled and took to Joaquin right away. My grandfather had not said much so I was waiting. Waiting for the reaction. Good, bad or off the wall. Just something.

Gramps looked at the stones in his hand and then turned to me, “Can I ask you something?”

My face froze. Here it was “the question.” I just whispered in my head, “Please don’t be about positions or how it works. Nothing political. Nothing sexual.” I dutifully nodded and I heard myself respond “Sure Gramps, what do you want to know?”

My grandfather looked straight at me and with as much love as possible in his eyes he asked, “Are you happy?”

The question was so unexpected from him. I did not know he cared about my happiness.

I nodded my head and smiled. “Yes Gramps, very happy!”

He wasn’t one to hug. So that is why I was surprised when he wrapped his arms around me. Still in shock I heard him whisper, "That is all that matters!”

He then turned back to the water and handed me a stone. “Throw another, let me see how all my coaching helped.”

I took a smooth small rock from his hand and positioned myself. I let the stone glide across the water in rhythm before sinking at 25 skips this time.

“Ah pretty good. Pretty damn good! Let’s go see what they got cooking for dinner. She promised me cake for dessert.” He pulled my arm in close to walk up with him.

“You know I always knew you were one!” He proclaimed.

“What? Always knew I was one, what do you mean?" I looked at him as we headed to the house.

He stopped and looked straight in my eyes again with large grin, “A stone skipper, I always knew you were one!”

My passion is and has always been writing. I am particularly drawn to writing fiction that has relatable storylines which hopefully keep readers engaged

More stories from C. H. Richard and writers in Fiction and other communities.