As the Macaw Flies 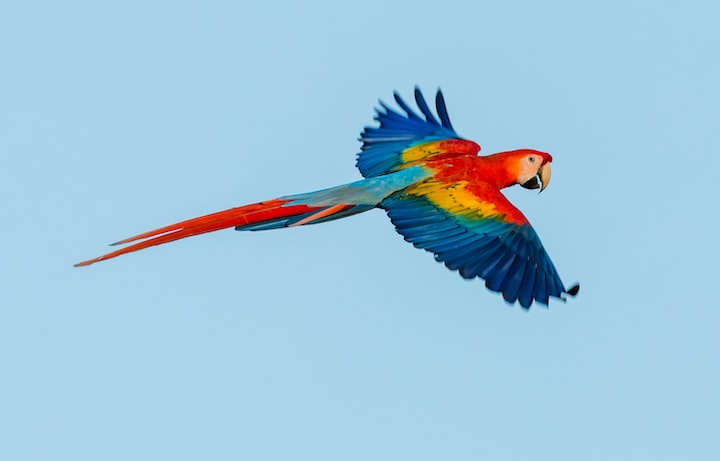 I perch confidently, talons gripping the bark. I wonder...why I've never seen another like me, but is that really important? What is important, I sense, is that I have achieved self-actualization. After all, I was brought here from a place called Brazil (so I've overheard) to protect, direct, and in all ways construct the lives of those to whom I've been entrusted.

After 75 trips around the great blinding hole of fire in the sky, I prepare for my final flight. I've got it mapped out so certainly as to have it a part of my DNA--a triptych unfolding before my mind's eye, each panel a roosting destination upon each of my three wards, now that my guardianships are complete. I've done all expected of me, finalizing the destiny and fulfillment of my three human families.

It's not leap of faith into the aether that I decide to take--it's more like muscle memory: I don't decide to take flight; the world sucks me into a vacuum that only soaring can collapse.

Thirty feet, forty feet, fifty...I head north toward the lake and over the tall, multi-chambered structures called houses, until I see Topaz Street. One house below stands out because it is, to me, a home distinct from the lumber, nails, and flooring that on first blush seem no different from that of the others. But it is different, because there is my imprint on the life that is there--present, past, and future.

Perhaps it's the ruminations peculiar to the scarlet macaw, but flight allows my life's timeline to collapse into a singularity. I was brought here to begin my guardianship duties long ago, but the higher I fly, the more the present blends into the past and future. By a hundred feet, I am outside of time altogether, and I embrace my life in this home existentially as me, inseparable from all those with whom I was consigned, at the behest of the fiery hole the sky, to commune.

I was young myself, so it was intuitive to all that I "belonged" to the five-year-old human hatchling called Luca. Luca was pink, unflawed, and had the whole world before her. Her parents, Richard and Phoebe, spent many trips around the blinding orb for yet another hatchling but, alas, it was not to be. I can empathize, because the being who trimmed my nails and clipped my feathers, each time the world outside turned, had told Phoebe and Luca that I would not likely create an egg, and that it was probably a good thing for me. I had no need of an egg. I had my Luca.

Luca began to leave me daily for school, during which time I squawked and pecked my chest in great distress before she returned, without fail, each afternoon. Had it not been for the daily afternoon respite from my panics when she returned, I likely--today--would be completely featherless and unable to take my final flight.

As my days with my beloved Luca tallied on, I watched the world each trip around the orb, from my perch, turn white, then green, then explode in colors, then brown, then white again. Although each morning Luca left me, by each afternoon--rain or shine, the world outside white or green or variegated--she returned to me. And each day, my distress of separation was diminished somewhat, then somewhat of somewhat, then somewhat of somewhat again, until I my epiphany--that she would always come back at the time I now realized I had assigned her. (If she returned to me, then it must be I who charged her with this obligation.)

By the time I was twenty circles around the fiery orb, Luca's daily cycles of coming and going extended into weeks, then months, and finally things called semesters. As stretched out as her returns home to me became, I could always count on Luca to come back. Even on those extended absences where I almost lost hope, I would see a large, rolling machine come up the driveway and spill her out to be rescued by me.

Luca's Richard and Phoebe were always happy to see her, too, no matter what had been the mood or disposition of whatever status quo they were navigating: the world stopped; the status quo evaporated into white and green and multicolored all at once. As wonderful a picture any artist might try to paint of this intangible tableau on canvas, it waxed monochromatic compared to her homecoming to me.

My cage's door was always open to allow me to ascend to the perch fastened above, which is where I generally remained except at night when the sheet of darkness came between me and the rest of the world. Often Luca would hold her forearm to me and I would step gaily onto it. She would reach under each wing to stroke the down on each of my sides. It was affection and intimacy and love.

There are just some things that make life, and Luca was one of them. I knew what her smile meant; I knew why her eyes sparkled; I would comb her hair tenderly with my beak, always ready to pluck out any vermin that might be there. But there were never any. Luca was spotless and, as such, my preening of her was an easy if not irrelevant task. Nevertheless, I remained vigilant, just in case. There were more things in this world to vex Luca than vermin.

We were a package deal, Luca and I; one would not have her life without the other.

That is why my world as a macaw died the day she did not come home. The world outside--previously cycling white to green to splashed with a spectrum of watercolors--turned black. The black engulfed the home. Richard and Phoebe lived the blackness--inhaled deeply to breathe it in. I could feel it down to my carina, so I could no longer fly.

We macaws can cry real tears, just like the ones that flowed from Richard and Phoebe. The tears washed away the whites, browns, spectrals, and greens. Straining to see through them burned my eyes, so I squawked loudly to shout them out. I reached new pitches, intensities, and timbres that frightened even me. If I had never seen another macaw in my life, my cries would certainly chase away any within the sound of my lamentations. Yet, Richard and Phoebe could hear nothing beyond the roar of their grief, which was as loud as my own.

My carina failed me, but I've been deprived of flight many times, during the trips to the being who trimmed my nails and clipped my feathers each time the world outside turned. Unlike the shears, this flightlessness came from the inside. How could I glide on an even keel? My Luca was gone.

There are those who would simply sigh and say, "That's life." Persons and loves and shared lives there one day but gone the next. That's life.

No! That's death. And that was the death of my family on Topaz Street. A great, rolling machine, like the one who brought my Luca home to me each semester, had--as I had overheard--miscalculated and taken her to Heaven.

Where was this great, rolling machine? This vermin! I would preen it from the world, from Luca, from the blackness that had engulfed Topaz St.

Life with the affections of Luca's mother, Phoebe, was good, but different. Luca could not be replaced, and Phoebe didn't intend to replace her for me; she intended to replace Luca for her. I began to spend all day on Phoebe's shoulder. When Phoebe stroked the down under each of my wings, it was different, but it was still good. Affection and intimacy and love. And I felt something else in that nurturing--surrogacy. No, not the same--different, but still good. Very good...and necessary.

Even Richard would hold out his forearm to me at times. The three of us had become something altogether different from the household we had when Luca was with us. Something good, but different; still, good.

As the world's greens and browns and whites cycled through each trip around the fiery hole in the sky, something new began to evolve. It was a maturity of a life without Luca--not a glaring hole in life, but a fact of life. That's life. Yet, this maturity, shared among Richard, Phoebe, and me, began to progress into a contentment of acceptance. How could she really be gone if she had been at all?

Phoebe spent the better part of a beautiful green day with me in our mid-25th trip around the fiery orb together. She stepped outside of our home, with me on her shoulder. Richard followed closely behind. Something momentous was about to happen.

"Thank you, Luca," she said to me. I did have a name, but she didn't call me that. "I'm letting you go...you're free"; and with that she held her hand to her shoulder, inviting me to step onto it. I accepted, for I could smell a rite of passage. A timely rite. A right rite. She jerked her hand, wrist, and forearm upward and I took flight.

For me, floating on the air above the home on Topaz St, Luca is always with me, our timelines scrunching down to not what was or what will be, but to something else, something good. Because Luca happened, it always has and always will, and that buoys me up on my flight over Topaz Street. Luca and I. Free. Phoebe and Richard free, too, and freedom never constrains love and love transcends time and space.

That was my first home. There on Topaz Street I had spent about 25 trips around the fiery hole, and my next two assignments were about the same amount of time, give or take a few round trips. Each, just as special; each just as successful; each with vulnerable heartstrings. Each with its whites and browns and fallbags of colors, mightily symbolic of the weather in our lives, inclement or fair or gorgeous.

A waft of sweet, warm air helps me rise high above Topaz Street; I see the cruel, rolling machines below that have become meaningless to me. I consult my mental triptych. There's still Nashville Avenue and New York Street to visit for summation, for sublimation. I fly toward uptown's Nashville Avenue; I know I exist just as inherently there--and finally on New York Street--as I did in my first home. Two more homes, two more hearths--two more nests, but only one more sunset.

My pass in review complete, I can target my final horizon as it reels in the fiery hole in the sky. My sky. Now I see: it's always been my sky. My bird's-eye view is a 340-degree panorama, and the meeting of land with sky is my life's denouement, erupting and then bursting with its own reds, blues, and yellows meant to meet the colors with which--and for which--I was imbued: to blend with the world and aether outside of time. It's a final flight collating my scarlet macaw life, one for which any scarlet macaw would be proud; and it's a glide through the only Heaven I need.

Receive stories by Gerard DiLeo in your feed
Gerard DiLeo
Read next: The Northern Wars