And the Crowd Goes Wild

by Taru Anniina Liikanen 6 months ago in Fantasy
Report Story 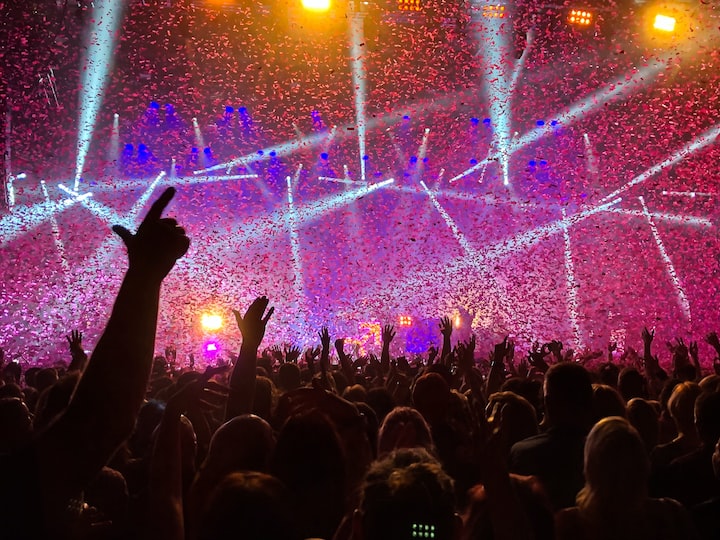 Photo by Roger Harris on Unsplash

The Valley Rock Festival was famous for hard rock, but not of this kind. Not for the kids.

Guys in costumes playing heavy metal about monsters and birthday cake would never be taken seriously.

Sami peeked at the audience and sighed. What he would have given to be out there, playing as himself. Show the people his star power, instead of hiding under this nasty plastic creation.

But capitalism paid the bills better than his face did. That was why he'd said goodbye to his old band, packed up his bags and gotten on the tour bus full of monsters to travel across Europe, playing for the children of heavy metal fans. This was the first show on their tour, in their homeland of Finland.

"Hey, man, how's it going up there?" Jan, their drummer, called out to him. He was picking on the bandages covering his entire face and body, trying to accommodate them to see better. "I never thought being a mummy would be so goddamn challenging."

"Not much movement yet. Some families on their picnic blankets, but not a whole lot of people yet. The first spot is the toughest."

"Goddamn it, I hate opening a festival," Jan mumbled. "It's like playing to a cemetery."

"It's almost like we're the cemetery," Oskar, the bass-playing vampire, mumbled from behind him.

Sami backed up from the curtains and headed backstage. He was going for a smoke, but their tour manager was in the way, talking to some journalists, so he headed straight for the food and drinks. It was not the time to give out interviews or roar in character to make them laugh.

He hated this character, but he knew they'd need to nail it today. The record company had already booked them appearances everywhere so they wouldn't lose any money if they didn't succeed in making the crowd dance and sing along, but they needed to do well for themselves.

For the group. To start the tour in good humor, to not want to kill each other as soon as they got on the bus. The Monsters or Rock was a new band, assembled by the record company, and the guys barely knew each other.

Something was itching in his throat. God, please don't let it be a cold, Sami thought. He couldn't get through the whole gig, let alone the one the day after tomorrow in Stockholm, if he was coming down with something. Belting out those high notes in true heavy metal fashion required him to have his full strength.

Sami served himself a scotch and coke, heavy on the scotch, and directed it to the mouth hole on his costume. It only made the itching worse.

He picked up a couple of the mini cheeseburgers on the table and threw them into the mouth hole. God, they were good. But why was he so hungry? He had only just eaten.

"Whoah, man, what are you doing? Leave some for the rest of us."

Sami turned to face their werewolf keyboardist and growled.

"Okay okay, I see. Somebody's getting a case of the Lead Singer Syndrome, huh?"

The werewolf backed off, and Sami finished the burgers and moved on to the hotdogs, chomping down one after another. The record company had ordered them plenty of snacks backstage, but nothing seemed to satisfy him.

It was almost as if he'd really turned into a voracious dragon, Sami chuckled inside his suit.

The itch in his throat was now traveling down into his chest and stomach. He stopped eating. God, was the food fighting him now?

Wasn't it that people said heartburn could be the sign of a heart attack? Maybe all his years of living the rock'n'roll life had finally caught up to him, at 35. Maybe he'd be one of those rare cases of early-onset cardiovascular disease, caused by all those late nights drinking scotch with the boys in smoky little bars.

And all of it for nothing. Here he was, playing for little kids.

This goddamn suit wasn't helping, for sure. When they'd get to Southern Europe, it would become a sauna.

He needed some air, no matter how close he was to getting on stage. Those goddamn kids could wait, he couldn't afford to get a panic attack right now.

Sami grabbed the dragon's head on both sides and pulled.

It was almost as if the suit had grown onto him, become him.

"Let's go Sami," the tour manager patted him on the back. He growled in response.

"Okay guys, let's have a great show," Jan was desperately trying to hype them up as the loudspeakers began booming with heavy metal.

The itching had become unbearable now.

At least, judging from the applause and screams in anticipation of the band, there seemed to be some more people out there.

"Give a warm welcome to the Monsters of ROOOOOOOCK!" The loudspeakers let out the ending of the pre-recorded message.

The mummy, the zombie, the vampire, the werewolf and the ogre headed on the stage and took their positions.

What was that smoke coming out of his mouth? Had he swallowed a cigarette? Was there a fire inside the suit?

"Do you guys want to see a real beast?"

It was Sami's time.

Daniel the Dragon stepped out on the stage and roared as fire burst out from his mouth.

More stories from Taru Anniina Liikanen and writers in Fiction and other communities.