by Melissa Eaves 2 months ago in Fable
Report Story

The Real Alice from Wonderland 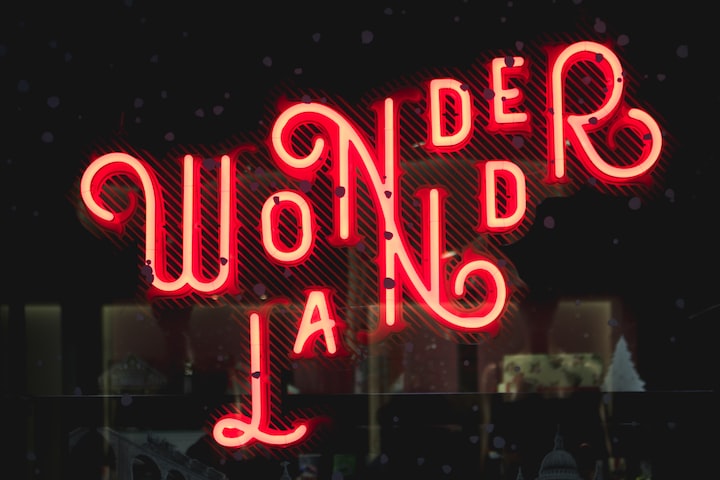 Photo by Nicole Baster on Unsplash

She woke this time on a train. As it sped through the early morning light Alice felt eerily out of place as she always did upon arriving in Wonderland.

She had what were now referred to as episodes. After the first trip to Wonderland it was as if a portal opened.

And at any given time during the day her mind could flip and woomph the world around her changed and it was down the rabbit hole. And into another world, an alter existence Alice would again find herself.

Over the years she sought psychiatric help and was given medication which only made the trips more frequent with side effects and less clarity the narrow misses in Wonderland also became more frequent. So she focused instead on a more holistic approach incorporating yoga and various mind relaxation techniques. She successfully curbed most attacks by a rigorous health regimen and zero tolerance for toxic behaviors and traits. But on occasion she would find herself unprepared and unwittingly sucked into the vortex of the Wonderland dimension where the evil queen plotted to destroy her and rabbits were her talking companions. A place where size was relevant to perceptions but not to space.

On this particular trip she found herself alone on the train, and more than a little nervous. The alter dimensions had grown a little more threatening to her as the years passed and although the frequency decreased the hostility of the queen had grown.

She was pondering the previous experiences and realized that once again her visits to Wonderland had upped in occurrence. It was as if the queen was real and not a product of her over active imagination as the last doctor had said, or a visual representation of a hidden tendency to self destruct as the one previous had said. It was as if she was real and knew when success or happiness and mental health were in Alice's vision and chose then and only then to come out and play. So, in doctorate terms Alice's mind kept the queen and Wonderland dormant until right before a known event, trial, or success at which point Alice's subconscious would alleviate her of success to curb her hidden fears that she was unable to confront on her own. In Alice's mind (what she liked to call layman's terms) she was a hidden little demon from some hateful witches bourdoir who liked to torment her at in opportune times and turn her success.

As she was speculating the train began to slow and as the whistle blew she spotted the White Rabbit on the platform beside him stood beings who looked a lot like china dolls.

As she off boarded she noticed a large white house that looked strangely like her office of work. The rabbit hurriedly whispered to her that the queen was currently seeking women to lure into sex trafficking and was using the white house as a hidden base of operations.

(The queen was ever forming new plots and more lucrative ways of harming others, but to some in the kingdom it was a relief and a break from the incessant and life threatening former mantra of "off with their heads.")

He further explained that the women beside him were already lured and on their way to work in various forums through out the world. Alice looked in semi aghast horror at the women who no longer even resembled women and realized that these porcelain skinned and curvaceous dollies had actually once been real women like her.

It was safe to assume that this would be the queens determined fate for her. "What do I do," she whispered to the rabbit furiously. "How do I get past this one?"

The rabbit closed his phone snapped his pocket watch shut. "I am sure you will figure it out." "Time's up." And with a leap he hopped the train that was just pulling out.

Alice doesn't know whether to stand on the platform and await the next train in hopes of a ticket out of this or march across the lawn find the queen and commence to punching her in the head. She then thinks of the guards, and cards, and kings, and various other armed forces the queen might utilize and speculates that perhaps they will be less in this country lawn and hidden estate. Thinking of the mean little queens disposition and former experiences with her, however, she decides against it.

She decides on a bravado and marches across the lawn. She considers shedding her clothes in defiance of the queens sex schemes and as a shock factor but again she decides against it.

She decides that in lieu of years of torment and as an affront and dehabillitation to her self destructive subconscious (if that's what it was) to confront the shocking scenario with all the dignity she could muster and head on.

She walked up onto the wide veranda with her legs shaking and lifts the knocker on the door.

The sound reverberates down the silent hall that gleamed in polished wooden tones oiled from the the sun.

The queen herself opens the door and for the first time Alice sees her alone. She becomes small, almost tiny and appears old and haggard to Alice's observant eye. And in that moment Alice senses a finality to this as confrontation, this haunting, eerie and sometimes place of adventure called Wonderland.

As Alice stands there the queen grows smaller and smaller. Becoming the tiny being that once before in a land far removed that Alice had first met. As Alice continues to watch, the queen scurries past her feet and opens a tiny door into which she disappears.

And as a door in her mind closes the possibility of this nightmare being a dream is nearly realized....she considers embracing doctorate theories about this alternate reality and moving on with her life.

But then the tiny door opens.

And Alice is in her own world staring at the queen who is actually her closest friend and colleague, Cassandra.