A Pear for the Wizard

by Shelby Brengle 2 months ago in Short Story 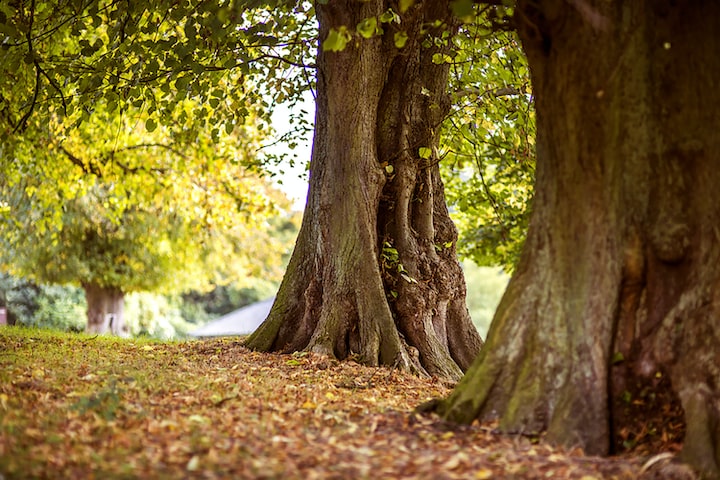 Photo by Natalie Thornley on Unsplash

Emma ran across the field past several horses, struggling to keep her breath while the horses took little notice of her. She was focused on her five-year-old nephew walking to the woods ahead. She called his name repeatedly, but he didn't look back.

"LUKE!" she bellowed again as she caught up to him. She was supposed to be watching him on Aunt Melanie's back porch, but after a few minutes lost in thought, she noticed Luke was already running across the field. Now that she was by his side again, she said "What are you doing?!"

Luke looked up at her and then pointed to the woods a few feet in front of them. It wasn't a dense or expansive woods, but Emma had always been curious about these trees at every Thanksgiving she spent here. Most of the trees had shades of orange and red, while the rest were either bare or luscious fir trees. The opening of the woods had several Bradford pear trees that her aunt and uncle regrettably planted decades ago, as they had since learned that these trees have fragile branches and an offensive smell in the spring.

"I need to get a pear." Luke told Emma. He kept looking back and forth while his arm stayed straight up in the air.

"No, they're pear trees! Owen said I have to give one to the evil wizard so he will be good to me and give me a wish."

Emma laughed. "I don't know what he is talking about, but I wouldn't listen to your cousin about this type of stuff"."

"He said if I see the Wizard of the Woods on the farm and don't give him a pear, he would curse us." Luke started to walk to a pear tree when Emma grabbed his shoulder.

"Luke, Owen is lying to you. There is no wizard in the woods. We have to get back to the house right now".

"Please!" She paused. "Don't you want to be back for Thanksgiving dinner?" Luke hesitated and then took her hand. Emma looked up at the pear trees and thought about how they seemed smaller then in the Thanksgivings past. She once tried to climb one of them as a kid, only to find a branch breaking below her. Luckily, she was not far from the ground. She was lost in thought again when she noticed there was no small hand holding hers anymore.

"LUKE!" she cried. He was a few inches up a tree when she grabbed him and picked him up. "Do not climb the trees! Do not go into the woods! And never run wander away from me when I'm watching you!"

Luke didn't say anything at first, but just as Emma took his hand, he said "Look! What's in that box?" He pointed to a cardboard box several yards into the woods.

"I don't know, sweetie, but we're gonna eat soon." She then noticed something moving. They both saw what looked like cat ears moving up and down in the box. Holding Luke close, she snuck over and saw a grey tabby nursing four kittens.

"Kittens!" Luke squealed. Emma gasped and put the boy down. She noticed the mother cat was thin, but not sickly. The purring mama was more interested in her kittens then the wide-eyed humans. Emma was worried about scaring her, but could not bring herself to leave the cats in the woods. She carefully lifted the box up and told Luke to hold onto her jacket while they walked toward the house.

Emma placed the box on the porch stairs and hoped that someone else was now able to watch her nephew. Her stomach flipped, however, when she saw her mother leaning over the porch rail.

"Alright!" Emma yelled. "I didn't let him run off. He ran off and I had to run after him!"

"Mom, look!" Emma gestured to the box. Luke was now sitting next to the cats and talking to them. Emma's mother peered into the box while Emma told her how they found them.

"Go find Aaron." her mother said. When Emma looked confused, she added, "Aaron is a vet tech. Go find him."

Emma went inside and returned with her cousin who was a few years older than her. While Aaron inspected them, the three adults agreed that Aaron would keep the cats in the basement and that they would not tell anyone else about them so as not to make the mother cat more nervous.

Emma turned to Luke and smiled. "Okay, Luke. Remember that we are going to keep this a secret, so promise that you won't tell anyone. Okay?" Luke mimed zipping his lips. Aaron snuck the cats through an outside door that led to the basement while the others went inside.

Throughout the house, many aunts, uncles, siblings, cousins, and others were gathering in various places or preparing dinner. Emma overheard bits of usual Thanksgiving conversations as she walked room to room. There was the talk of politics ("It's been over two weeks and I still can't believe Trump won" "2016 has been the worst year"), talk of health problems ("My back has not gotten any better" "You can't keep putting off your colonoscopy") and stressful questions ("What are your plans for after college?).

Exhausted, she was glad that the meal was finally being served. She looked over at the kids table and saw Luke next to Owen. She thought Owen better not fill her sweet nephew's head with anymore nonsense. After dinner, most of the party left, and those staying over cleaned up and engaged in more conversation. When Emma felt it was socially acceptable for her to leave the room, she left and collapsed onto an inflatable bed. She slept in late, and awoke to find Luke standing over her.

Emma rose and went to find her mom. After she asked if she could see the cats, her mom told her that Aaron took them to work with him. Her mom then explained that Aaron had called her cell earlier and said the mother cat tested positive for feline leukemia.

"Luckily, she doesn't have advanced leukemia, but her kittens more than likely have the disease too. I don't know how they'll end up."

"Who would leave a box of cats in the woods like that?!" said Emma.

Her mother shook her head and mouthed "I don't know" and left the room while Luke ran in.

"Can we see the kittens?" he asked.

"Well, Aaron took them to the vet, but maybe later."

Emma paused and said "They're fine." She figured that there was no use in telling him the truth now since Luke would likely not even return to this farm until the following year. "You know what, though? Since you're not allowed near the woods, maybe I can take a pear to the wizard and ask him to cast a protective spell on the cats. Just to be extra safe."

"You mean the Wizard of the Woods?"

"Yes, the Wizard of the Woods."