by Alisan Keesee 30 days ago in Sci Fi 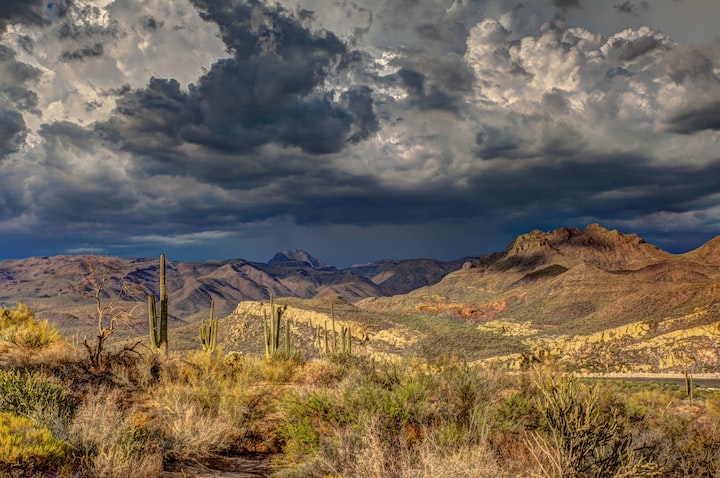 Photo by Robert Murray on Unsplash

Nobody lived in this godforsaken desert by choice. Dust devils swirled along the road, passing over a decrepit, old road sign that read “Entering Finch, Arizona”. One corner of the sign was ripped jaggedly and the white words barely readable due to the copious amounts of dust and sand. No one had called it “Arizona” for years. Now it was just the desert, the place where They sent people they were trying to get rid of.

Circe glanced over at her father in the passenger seat. His knuckles were white clutching the worn handle of his black briefcase which he would no longer have a use for. His jaw was stiff and Circe could tell by the way it moved slightly back and forth, that he was grinding his teeth. A nervous habit Circe had noticed more in the past few months.

People like Circe. A young girl with dusty blonde hair and a notebook clutched to her chest. She withdrew a pen from her pocket and began to scribble in the notebook. The pages were covered in short sentences, simple things like “Good. How are you?” “Can I have the Caesar salad, please?” All in neat, readable handwriting, occasionally intersected with small doodles of large trees and vegetation, none of which was surrounding her. Along with her notebook, Circe’s own case–a laptop case–sat on her lap. She had brought the computer honestly surprised They let her keep it after everything that happened.

The small family reached their new home, a petite two-story house centered in the middle of a large sand dune. Her old house in the city had a garden closed off from the rest of the world behind it. Circe used to spend hours in the garden playing games based on her namesake, turning men into pigs. As she got older, she would sit outside and read of the civilization before Theirs. The United States of America, it had been called. A nation built on freedom and free will. The colonists rose up and defeated the British by throwing their tea in the harbor and fighting a brutal war. The colonists were brave but went about it in entirely the wrong way. They were too forward, too aggressive. The real rebellion was behind the scenes. Why They allowed this history to survive, Circe had no idea, yet she still found herself trying to be someone like the men from so long ago. Someone who stood up for what they believed in who threw the tea in the harbor creating a watered-down, salty beverage the British no longer had interest in.

It would’ve just begun to bloom. The new rosebuds appearing on the prickly vines and last year’s tulips waking up from hibernation. But she wouldn’t see it that year.

Her mother climbed out of the van behind her. Placing her hands on her daughter’s shoulders, she sighed and looked longingly at their new home.

“Oh honey, I’m sorry, you know how I forget. I’m sure you’ll get used to it,” her mother said, running a hand through her daughter’s blonde hair that so closely resembled her own. Her hair already catching orange particles of sand.

Her father was already on the rickety front steps, the squeaking reaching even the most remote part of the desert. On the door was a note written on thick, creamy government paper, which her father plucked off carefully.

“Welcome Everson family. We hope you enjoy your new home. More instructions will be sent soon.”

“Standard protocol with this type of thing,” her father clarified. “Mainly just instructions on how to use the appliances and a small map of the area.” His previous experience as mayor made him the most knowledgeable in their exile, his body tightening with every word.

Circe clung to the futile hope that they would give her a Wi-Fi connection once again. They’d already done all their scanning, taken away every other muscle of voice, couldn’t They just give back her back this one part of her life. She wouldn’t use it as she did before. She wanted to live. They knew that, but They didn’t care.

The family walked into the even tinier house. Sand rested between every crevice of every floorboard, in the paint on the walls, on the countertops. A TV was mounted on the wall and the living room led into a kitchen with only the necessities. Two bedrooms; one downstairs at the back of the house, and one that encompassed most of the second floor along with a closet and adjoined bathroom.

Circe chose the upstairs room and began unpacking. The dark walls of the room were less saturated in sand, but the room itself was dusty with age and the roof creaking above her, as if she were living under a particularly old bridge.

She could scream all she wanted; no one would—could—ever hear her again. She remembered the day they took her tongue.

It started like any other day. The early morning of the city was quiet, as if it knew the fate They bestowed on her. She was shuffled into a car before her parents even woke up. She had hoped they would, at the very least to squeeze her shoulder and push her hair behind her ears.

The procedure itself was quick, but hardly painless. She’d screamed and screamed, until she could no longer. The sound dull and hardly there, exactly what They wanted.

That day was just over a month ago, Circe had slowly begun to adjust; using the notebook to communicate, slowly learning sign language, reconciling with staying silent. But she could no longer scream. No longer let out her frustration.

The house creaked under her kick. Holes sprouting in the fragile walls. Her bookcase was knocked to the ground with a resounding thud. There was no way her parents were still asleep.

She yanked down the curtains and smashed her hand through the glass. The cold air swept over her knuckles as they contacted the outside world.

Blood spurted over her pale skin, finally giving it some color, and her hand began to throb. Shiny particles of glass clung to her skin in their last resistance against her punch. She heard herself whimper, but it was too quiet. Part of her wished all the blood in her body would just spill out through her hand, maybe then she would finally feel alive.

Her mother’s soft footsteps headed towards her door and before Circe could process it, her mother was crouched in front of her. Her mother’s eyes were concerned, but like Circe, her mother remained silent. She took hold of Circe’s bloodied hand and used the hem of her nightgown to apply pressure to it.

Circe simply looked down at the white fabric covering her hand, the blood soaking through and ruining it. She knew her mother didn’t care, no mother cared when their daughter was bleeding. But why?

Circe first learned what the Trojan Horse was when she was twelve. A wooden horse, thought to be a gift, when it was really an attack. Circe learned how to implement a Trojan Horse when she was thirteen. When everyone else was making cute little games in her computer programming class, she was tapping into Their defenses.

It started as a hobby. Circe would challenge herself to see whose computer she could get into that day. First, was a classmate. Then, it was the teacher. The principal. And finally, the school itself. She’d made the fire alarms go off one day to get out of a test.

After her trick with the fire alarms, word began to spread. Her classmates began to come to her with jobs. Hack into my boyfriend’s computer, I want to know who he’s really emailing. Change my grade in Chemistry. Give them a virus.

It all came with a price, of course. Circe began to make a decent amount of money and started to take bigger and harder jobs, until she stopped working for her classmates and instead for an underground hacking network.

Little did she know, hacking came with a price as well. During her father’s campaign, she discovered a plot against him. In a couple of hours, she had dismantled it, but she had done so behind the network’s back.

She got ratted out, her father lost his position, and she lost her voice. And now, here they were. Circe hadn’t seen the point in silencing her, when she didn’t have to speak out to do what she did. But that’s how They were. The slightest whiff of rebellion and you were silenced.

Her father came into the room now, his dark hair standing straight up on his head and his nightshirt buttoned up incorrectly. He looked down at the scene and frowned.

“Circe, Georgie, get dressed,” her father said, heading back towards the bedroom.

“What?” her mother asked, standing up and removing her nightgown from Circe’s hand, leaving behind smeared blood, but the wound itself stopped bleeding.

“We’re getting out of here,” her father said.

Circe stood up and dressed. She put on a warm sweater, a pair of jeans, and the pair of tennis shoes she had for years. She wrapped up a few more pairs of clothes into her blanket and tied them into one bundle. She flung it over her shoulder and looked to her parents.

“Where are we going?” her mother asked.

“Circe? I’m sure you came across this at some point. The Oasis?”

Circe thought back to when she had first encountered The Oasis. She had been digging around in the archives and came across an interesting file with the title, “The Oasis”. She opened it and found records of a civilization living within their own.

She’d forgotten about it at first, until she came upon one of their servers by accident. It was hard, but she hacked it and discovered they were living just outside the city! How was it possible for a whole other civilization to exist right under their noses?

The family started into the clear, cool night in search of The Oasis.