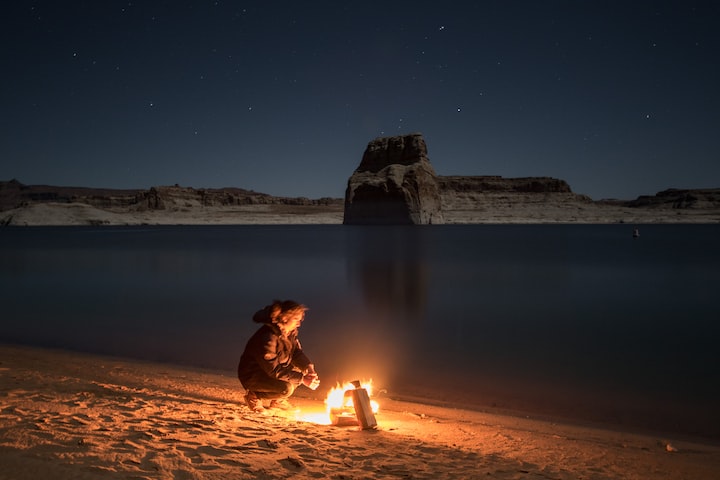 I closed my eyes, willing myself to calm. Things seemed like they'd been a whirlwind since we'd left the aquarium and it was starting to take its toll. My savior - I'd learned his name was Bray - was reaching his limit too. I could tell my slow and awkward gait was frustrating but he never said anything. Not out loud, at least. His eyes could communicate quite a lot with just a look, though.

It had been two days since my escape yet it felt like much longer. My people didn't really measure time the same way humans did but by the tides ebbing and flowing. Day and night were easier, which is how I even had any idea of how long it had been. I'd spent the first night staring up at the moon, watching the stars blink in and out, marveling at finally having open sky above me again. How long had I been in that tank? It felt good to have the open air on my skin, even if that skin was no longer protected by scales and fins.

Jolting out of my thoughts, I realized Bray had been speaking. Learning his language is proving easier than learning how to use legs but I'm still not sure of some of the things he says. 'Hello', however, is easy enough. "Yes?" I'm not sure if that's the correct response but his shake of the head tells me soon enough.

"I was asking if you're ready to tell me your name," he repeated, watching me. My brow furrowed as I tried to decipher his meaning. Thankfully, he took it as a sign to elaborate. "Name, like I am Bray. So you are....?" His hands extended towards me as he then watched and waited. I understood.

"I am Iaira," I said, slowly, testing it out. My name sounds much different on land and my voice stumbled over it. The syllables seem foreign but he nodded and smiled so it must be right. Good.

It's the most we've spoken since leaving but there hasn't been time to talk. Bray had a plan, supplies in place and secret allies, but once we were out of the city where I had been kept we were own our own. I gathered, from listening to him speak to both allies and other humans we passed, that there was a place that would be safe for us. The word Canada kept coming up and I could only assume it was the name of the settlement or colony we were looking for.

Our progress was slow, mostly because of the legs I still was unsteady on, and we'd spent most of our nights on the shores. I found I could stay on land longer after each shift but it likely made my mastery of human limbs take longer. The water would energize me, as my lungs would start to wheeze and burn the longer I was away until I returned. Bray assured me that it would stop feeling like that soon, I just had to get used to it.

Easy for him to say.

We still hadn't talked about what he'd confessed when we were at the aquarium. Hadn't discussed that he was like me. I would find myself looking at him as he walked in front of me, urging him to speak in my mind, but he hadn't. I didn't have the words yet to bring it up myself but I knew it wouldn't be long before I did anyway.

"Nice to meet you, Iaira," he said, once again bringing me out of my thoughts. His smile took over his entire face every time he did it and I found it very disconcerting. We did not smile this much in the water. "We need to get moving. The sun will rise soon and there will be too many people on the beach. I have a contact in the next town and we can stay there when night falls." He had begun to stomp out the fire and gather what little we had so I stood to do the same. Surprisingly, I didn't trip over my feet once as we got ready.

It felt like we'd been moving for days when I finally couldn't bring myself to take another step. The sun was high in the sky, the heat only making my body flush more. It was always cold in the depths of the ocean, this heat made my skin crawl. Judging by Bray's expression as he turned to see where I was, from several feet ahead, it had not been nearly long enough. He didn't say anything as I plopped down right in the middle of what appeared to be stalks of seaweed with a yellow anemone on top. My hands traced the green gently, reverently, as he walked back towards me. The tops felt soft under my fingertips. It was definitely not an anemone.

"Marigolds," he offered, settling beside me. I turned my flushed face towards him.

"Marigold," I repeated, softly. "What is marigold?"

"A flower." When I only furrowed my brow in confusion, he laughed. "Plant. Like you have in the water." I nodded, pulling one of the stalks out with an eager show of force. I moved the flower to my lips but Bray stopped my hand.

"They're not for eating," he explained with a smile. Growling in frustration, I tossed the flower away and huffed. My stomach rumbled as if in solidarity.

A deep sound emanated from him, one I'd heard him make many times. He called it 'laughing'. I wasn't sure if this was a good thing, especially when it was done directly after I'd said something, but didn't ask this time. I was too hungry.

"We can stop and get something to eat once we're through this field. Think you can make it?" I scowled, pushing myself to my feet instead of answering. The marigold was still clutched in my hand, which Bray noticed. Gently, he extracted it from my grip. A protest died on my lips as he tucked it behind my ear, moving my hair back as he did so. "There. Now, let's get you some food before you get too hangry and decide to eat me instead."

"Hangry?" I repeated, fingertips running over the flower as a smile curved my lips.

"Angry and hungry. Which usually equals trouble for men," he answered over his shoulder but didn't turn. I hurried my shaky steps to catch up with him.

"I would never eat a man. Not enough satisfaction." Pleased with my joke, especially as he gaped at me and laughed, I moved ahead of him with the anticipation of food driving me.

Thanks for reading! If you enjoyed, and have the means, please consider giving a tip or even just leaving a heart for me to continue these adventures. (I thrive on likes/applause, I'm a bit like a fairy in that regard) -H