A traumatic experience on a train. 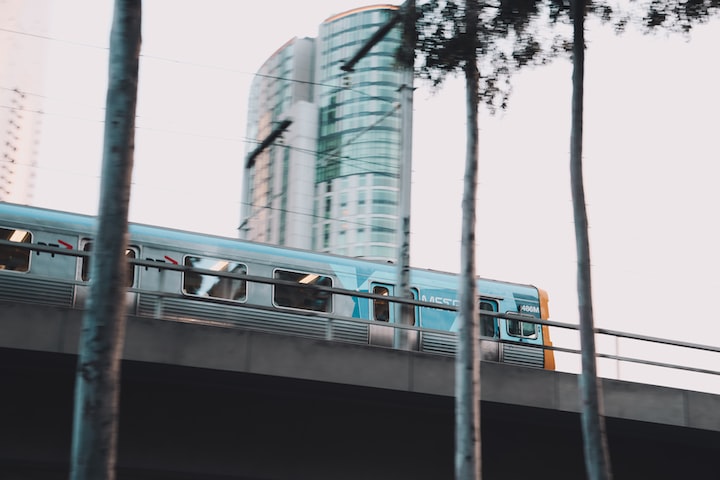 Photo by Pat Whelen on Unsplash

A mistake. That’s what the headlines are saying. A freak accident. It didn’t feel like one. I was sitting on a train, the rough fluff of the seat tickling my arms as I watched the world go speeding by, music blasting in my ears to block out the loud and incomprehensible mumbling of the announcements. Rain splashed against the window, and even though I couldn’t feel it, I wrapped my arms tighter around myself, wishing for a jacket. A tickle ran down my neck as the train began to rise, travelling up the raised tracks. Through the lashing rain, I could just make out the distant tops of houses beneath us, the tops of the trees barely making it to my eyeline swaying in the strong wind.

A loud grinding filled my ears, sending tremors down my spine and my causing my heart to hammer. Yanking my headphones out, I looked around to see others doing the sound. The same grinding sound came again, this time louder and longer. Rattling filled the air as the windows on the train began to tremble, first gently, building up to a violent shake. The train gave a large jolt, before jerking sideways, sending everyone flying to the left. I smacked into a seat and felt a searing pain in my arm. For a second I couldn’t breathe. I heard screaming and thudding. Trying to sit up on the now swaying train, I saw everyone running towards the back, away from the front of the train. At first I was confused, and beginning to hear a high ringing in my ears, slowly drowning out the screams.

Then I saw it. The carriage in front of us was tilting downward, towards the ground. The grinding sound came back, louder than ever, and the whole train shook angrily as it slid closer and closer to the edge of the broken tracks. The entire carriage slowly slid downward, shrieking as it did. Shaking, I grabbed hold of the handle on the back of my seat and clamped my eyes shut, needing to readjust my hands because the sweat. My throat burned and I could feel the tears in my eyes. I slowly slid off my seat, holding on for dear life as the train crashed. The feeling of the train hitting the road took away my breath. I couldn’t hold on any longer. As I fell, I thought of home, of my family and my friends that I may never see again. I thought of all the birthdays, the parties, the laughs and the tears. The rushing sound in my ears was all I could hear, and all I could focus on. When I hit the front of the carriage, I felt pain all over, then nothing. Everything went numb, the world went silent. I could see flashes and movement. Everything went black.

When I woke up, everything was white. The white walls, the white bedsheets, the white coat of the white man with white hair standing beside me. He asked me if I could hear him. Yes. Could I speak? Yes. What was my name, do I remember anything, what was the date? I could answer everything. But I had a question for the doctor. What happened? He smiled sadly at me.

“I’m sorry. You were in a terrible accident. The train you were on derailed and fell off the bridge. You took quite a lot of damage, I’m afraid, but don’t worry, with some rest and TLC, you’ll be back on your feet in no time.” I felt a clamping feeling in my gut, and my throat felt dry. What…?

“Did anyone die?” I stared at him imploringly, tears rushing down my cheeks.

“I’m afraid so, yes.” I nodded, and stared at my knees. A nurse came in and murmured something to the doctor. He nodded, before excusing himself. I looked around and found saw a TV remote. I clicked it on, and found the news.

“In other news, a train travelling along a raised bridge was derailed yesterday afternoon, causing the deaths of five people and countless injuries. When questioned, a Metro officer claimed that what happened was a freak accident that could have been prevented.” I stared at the screen for a minute. Five people dead and countless injured and that’s all the officers had to say? People lost their lives, their livelihoods, it was horrible. This was more than just some accident.

It was a tragedy.

More stories from Emma-lee Howarth and writers in Fiction and other communities.