A Bloom of Jellyfish 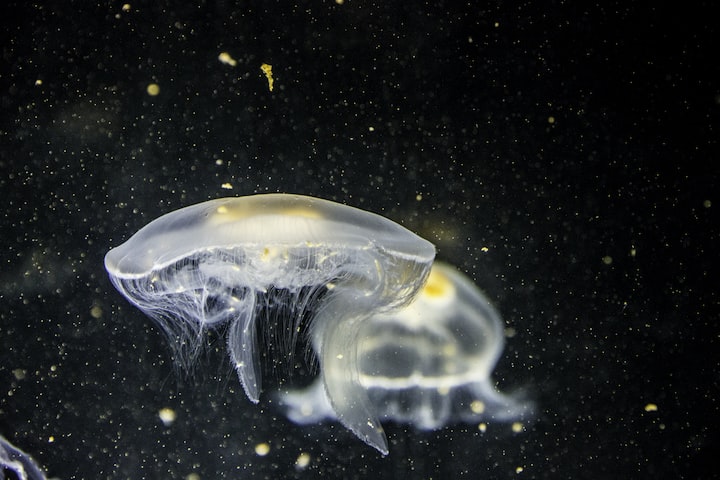 Photo by Matthias Götzke on Unsplash

“When does she get here?” Frankie yells across the room.

I take a long pause, knowing she’s not coming today.

Frankie breaks up the lull in the air with a sigh, “Ah, I know what that silence means.”

I nod back in agreement, “She really did want to be here today though.”

Well, she said she wanted to be here. Clearly, she didn’t mean it or she would be here. She would find a way to be.

Mom has a way of never following through. She’s kind of always been that way. I’ve been able to deal with it longer than Frankie so it doesn’t upset me anymore. I’m disillusioned at this point. It still stings when I have to fill him in though.

Frankie’s tiny voice disappointingly adds, “Well, can you take a photo for me so she can see it later when we get home?”

“Of course,” I reply, pulling out my bedazzled flip phone that is only capable of holding 10 pictures at a time, “say cheese!”

Frankie goes over to the huge tank filled with jellyfish, and has the most excited look on his face. Jellyfish are his favorite, he loves that they don’t have bones.

Today was the opening of the aquarium’s new exhibit, “A Closer Look at Jellyfish,” that includes a touch tank where you can stick your hand in the cold water filled with white jellies. Frankie has been waiting for this day since they announced it in September.

He comes here every Wednesday after school when I won’t be home because of a soccer game. He gets in with his middle school student pass and just wanders for hours. It’s his little sanctuary. Well, it’s actually quite big.

I’m not surprised that mom didn’t show up but it breaks my heart all over again when Frankie realizes she’s not showing. She’s never actually been to the aquarium; she says she’ll come on the weekend once a month and never brings him. This time, for the new exhibit, she actually planned on meeting us here. Dad was to drop us off and she would meet us here.

I wonder what excuse it’ll be this time…on a Saturday.

Frankie skips around the aquarium for another hour. I can’t believe how excited he gets, even knowing every inch of the place. I wish I had that again.

Right when we’re about to leave, I see a text from mom: “Wait there, I’m on my way.”

I’m hesitant to tell Frankie this information, in case it turns out not to be true, but I decide to ease him into it, “Hey, Frank?”

He looks up at me with big wide eyes.

“Why don’t we wait a little longer, see if mom comes. Want to get a snack?”

Frankie’s face lights up like a jack in the box bursting out of the lid. He runs up the nearby steps that take us to the food court and I grab the only 5 dollars that I have left in my wallet.

He takes the bill and slides it into the Dippin’ Dots vending machine. Cotton candy is his favorite. I would choose cookies and cream but I don’t mind sharing his choice.

The machine’s hand picks up the little container and $1.75 comes sliding down the slot, all in quarters. I grab the coins, Frankie grabs the dots and spoons, then we both dig in.

“Carrie,” Frankie begins, “what is your favorite animal in the aquarium?”

“I’d say the jellyfish--but that’s your favorite. I always liked crabs the best until I got pinched by one. I cried to dad all the way home.”

This made Frankie burst out in laughter, “You cried when a crab pinched you?”

“Did it make you bleed?” He asks, genuinely curious.

“Nope…” This makes him laugh even harder.

With happy tears in his eyes, I continue, “My favorite animal now is the sea lions. They’re always so loud and splashy. I like that.”

He bursts out of his chair, “What time is it?”

The almost-finished container of Dippin’ Dots is shoved into my hand and he drags me down the stairs, through the lobby, passing the jellyfish, turtles, and sharks. I feel like we ran a mile when we finally get to the destination he had in mind.

“The sea lions,” he says with his arms presenting the pool behind him, “they feed them for dinner every night at 4 before closing.”

“Well, looks like we’re just in time.” I say as the worker with the bucket of fish comes into view.

We plopped down on the bleachers and watched as the sea lions clapped and roared, filling the room with excitement and laughter. Frankie is absorbed into their world; I could see him leaning towards the glass on the edge of his seat.

The sea lions started to calm down and the crowd began to disperse. He looks up at me and says, “Thanks for being here. This was a LOT of fun!” His tongue stuck out between the gap in his front teeth when he said “a LOT” and I couldn’t help my cheesy smile. He’s pretty mature for 11 years old but that gap sets him back a few years. It reminds me of when he first lost his front tooth.

There is only a half an hour before the aquarium closes and mom is still nowhere in sight. There’s nothing left to do today except for homework, so we decide to wander around a bit more. Waiting for mom, while also not waiting at all. We go back past the sharks, turtles, and jellyfish, through the lobby, and up the stairs by the food court. It’s the only way to get to the gift shop. Frankie knows we can’t buy anything but he likes to look around anyway.

A little jellyfish magnet on a spinning display case catches his eye, “Carrie, look at this one!” He moves it around to show me that the fabric tentacles move in the win. He spins in a circle the tiny bits of fabric waving in the air.

I look across the room and the worker at the cash register looks familiar.

“Carrie, nice to meet you.”

I wrack my brain to think of what he means. Why would he know my name? Am I supposed to know him? The blonde curly hair looks familiar but I can't seem to place...Oh. My God.

“That would be the one.” He says with a big grin.

I continue, “I think it’s been 5 years, wow! I can’t believe it. Hey, Frankie. This is Jake, we went to camp together in elementary school.”

Jake comes out from behind the counter and bends down to Frankie. Not because Frankie is very short but because Jake is very tall. He got really tall in those past 5 years. And is brace-less.

Frankie bounces out of his shyness immediately to talk about the jellyfish, “Yes! They are my favorite. I’ve been waiting for this exhibit to open since September…did you know that some of those jellyfish in the tank could be 700 million years old? I could have touched an immortal jellyfish!”

Jake bites back, “You know what? I didn’t know that. But you know what I do know, some jellyfish can have teeth.”

Frankie smiles proudly saying, “I did know that.”

Now addressing me, Jake goes on, “He’s a smart one.”

“Yeah, I didn’t know either of those things. Sounds gross that they can have teeth.” We all chuckle a little.

“So, since you’re officially the biggest fan of jellyfish here, Frankie, would you like to take that magnet home with you?”

I instantly decline, telling Jake that we came just to look, we can’t afford to get anything here.

“No, no, no, I’ll give it to you as a gift! Each month the aquarium sets aside extra money in case a kid pickpockets one of these things. At the end of the month, if no one stole anything, we choose one lucky guest to choose something small from the shop. And this month, it’ll be you, Frankie.”

“Really,” Jake replies, “I’m locking up here, want to head out together?”

I nod my head and Frankie and I wait for him to pack up his things. As we’re leaving, Frankie runs ahead of us.

“It’s the beginning of the month,” I say.

More stories from KB and writers in Fiction and other communities.