Why do I never get to be in your selfies?

by Iulian Dascălu about a month ago in celebrities
Report Story 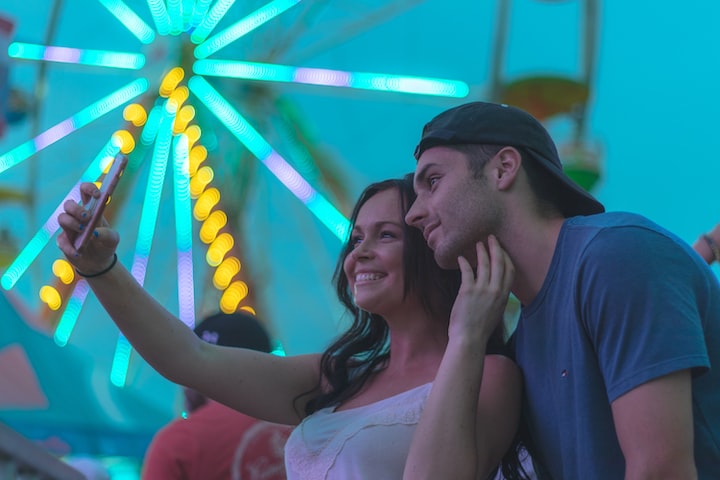 I know most people who see and like this post won’t read the caption. I mean, who reads captions, right? But I need to get this off my chest, even if it only ends up being for me.

What is it you think you see in my photo? A bubbly, self-assured blonde woman in her 20s who’s got it all under control? I mean, how could she *not* be in control with those immaculately brushed brows, true? Or a carefree girl with her head thrown back in laughter at what must’ve been a pant-wettingly good joke? A lovely lady who’s mind must be as free from clouds as the blue skies that frame her face?

Or have you already scrolled on, tutting to yourself, “Oh, that vacuous Sally Horscroft, always taking selfies, she’s so vain.” Or perhaps you’ll take the time to leave a comment to tell me so, instead of just hitting that unfollow button. Which you’re welcome to do at any time, y’know – it won’t cost ya!

I understand that. In a way. After all, don’t we all have things we do to make us feel better, whether it’s practising yoga, learning macramé (BTW you should totally check out @maisiesmaccreations for lovingly handcrafted toys for tots!), seeing our favourite bands perform, hunting for sport. For me, it’s being able to look at a photo of myself and liking it.

It may not sound like much, but it’s been a long journey to get to this point of acceptance in myself. I am truly blessed for those of you that have kept me company during the ride. For forgiving me when I’ve taken a wrong turn. For slowing me down when it comes to those pesky speedbumps. For reminding me to check my mirrors. For sticking a hand out the window and just feeling the air. But most importantly, for nudging me to look out for the red lights.

I don’t often open up this much about my personal life, but allow me this and then it will be back to my normal content (hit that button to be notified of when I next go live, as you won’t want to miss my demo of the exciting styling tool I’ve been sent that recreates the 80s perm with a 20s twist!). And for those of you asking about my sweet boy, my little Bichon Frise, he’s recovering well from his surgery and excited to give you new content modelling his special collar in the next few days! To everyone who’s commented and DM’d, we both love you so much. Just hear me out this one time, if you’ve made it this far, and it’ll be back to business as usual. Pinkie promise.

About two years ago, I met a red light posing as an insecure toddler posing as a man – we’ll call him Saul. Well, I say ‘met’, but it’s sadly the way of romance these days – he started creepin’ in the DMs. But he was charming. Funny. Complimentary. Could manage to write a paragraph rather than send through one sentence at a time. Didn’t follow up questions seconds later with a string of “????”.

A few months later, I agreed to meet this red light. In a public place of course – safety first, girls! I didn’t see the red light. I saw a warm, amber glow, because I had my sunglasses on. We really hit it off. We arranged a second date. And several more dates. Before I knew it, we were merging our bookshelves. All my friends thought he was fabulous. I think my parents liked him more than they like me! (jk)

But soon the cracks started appearing. He lost his job and was shady when I tried to find out why. He was envious when I started getting more and more deals with brands (although seemed happy about all the dinners and holidays they paid for, funny, huh). Then he started in on my friends, the ones who had all sung his praises. I was spending too much time with them, he said. I was neglecting the relationship, he said. How do I know the friends you’re meeting up with aren’t actually hook-ups, he said. Instead of constantly trying to argue my side, I found it was easier to stop seeing them. I ended up giving excuses, saying I got an offer of a photoshoot that would result in epic exposure, anything plausible I could think up on the spot.

Then he started muscling in on my work. Telling me the outfits I was putting on socials were too revealing, that I was acting like a whore. Complaining that I took too many selfies. Asking who I was sharing them with that he didn’t know about. Asking why he didn’t get to appear in them.

Yes. He literally said, “Why do I never get to be in your selfies?” Remember, I said this was a toddler we’re dealing with here. It wouldn’t be a selfie then would it?! Utterly ridic. It would be a couplie, or a selvesie, or a twosie. It was so absurd I started laughing uncontrollably, and he got mad and told me I was being abusive and making fun of him.

The turning point came when my childhood friend, Rusty, tragically took his life. I had to cancel dinner reservations – that I had booked and was going to pay for – to attend the funeral. He threw a cup of coffee at the wall when I told him. As I looked at the brown mess I saw it could be easily fixed, luckily the thing had only broken in two. But what if the next thing he threw would be something not so easy to fix – me.

So, back to the question. What is it you think you see in my photo? I see victory. I see defiance. I see someone who wanted to document a moment where she felt good about herself. I see a survivor, who replaced the sunglasses that were replaced with rose-tinted spectacles, who replaced those with contacts.

More stories from Iulian Dascălu and writers in Families and other communities.