The Art of Gratitude

by Julie Bane 2 years ago in art
Report Story 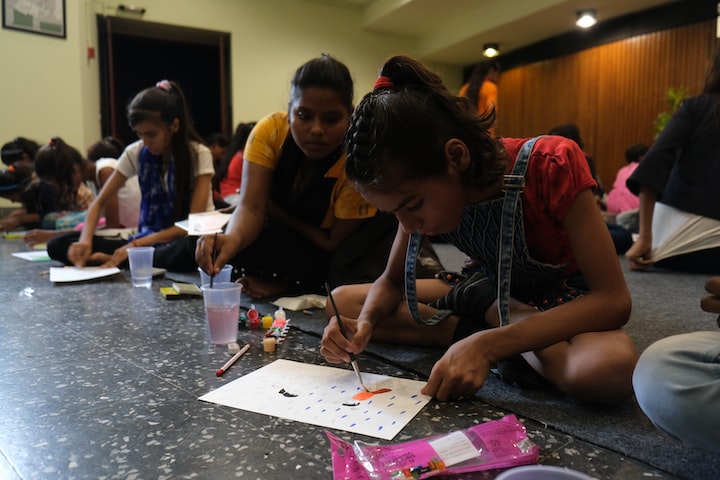 Photo by Yogendra Singh on Unsplash

Drew was outgoing, single guy who worked as an art teacher at one of the local elementary schools. He also ran an art workshop at the community park on Saturday’s with his free time, mainly for kids, but anyone was welcomed. Drew always had a vision in his head that he wanted to start his own art center for the people in his community to gather, talk, and create, but he just never had the financial means to do it. Everyone in his community knew about his dream and thought that it would be a fun place to have in their town.

Drew an appointment with the bank this afternoon to see if he could get approved a loan to start his very own art center. He had been waiting so long to get to this point, his excitement consumed him. He thought it should go smoothly as he had a steady job and has been an active volunteer in the community for years. He hoped that would be enough to get him the money he needed to make his dream happen and of course, Drew told everyone about the center.

He left work and rode his bicycle to the bank. Once he got there, his nerves were firing on all cylinders. Drew got a cup of water, stared at the television set playing in the lobby but was too distracted to watch it. So, he pulled out his phone and mindlessly open and closed several apps, and then he got up and walked around a little bit to calm down and to pass the time while he waited. Then his name was finally called. This was it and he sat down with the loan officer and the talked about the loan, which ended up being a preliminary appointment and quite disappointing. He will need to return next week unless they call before that with a final decision. The loan officer did say that Drew’s income to debt ratio was a determining factor and it based on what the loan officer could see with the documentation provided, the loan decision didn’t look great, but there was still a chance.

This was a scenario Drew did not see coming as he left the bank. He walked to the bike rack and spotted something on the ground below his bike and picked it up to examine it briefly. It was a small, black book. He opened and fanned the pages quickly; it looked important. Still disappointed and not thinking clearly, he stuffed it in his pocket and got on his bike and started to ride home. He was about halfway home when he hit a rock and got a flat tire. Drew felt as deflated as his tire as he was walking his bike home thinking his dream was in jeopardy. He rounded the corner of his street, pulled up in his driveway and put his bike away. He walked into his kitchen and grabbed a beer. He sat on his couch, turned on the tv and stared at it, worried about his loan decision, he didn’t hear the local news station made an announcement about a missing small, black notebook as he drifted off to sleep.

The next day, Drew awoke with a panic, noticing he had spilled his beer all over himself when he fell asleep on the couch last night. He jumped in the shower and was already running late for work. While he was getting dressed and scrambling around getting his things together, he turned his head to the television that was still on from last night and he heard something about a small, black book, but missed the entirety of the story. He raced to the garage and jumped on his bike and started pedaling quickly to work.

During lunchtime, which is recess for the kids, meant Drew had a chance to eat and read a few emails, but his phone rang as he started to pull out the peanut butter and jelly sandwich he quickly made before rushing out the door this morning. He answered the phone. It was the loan officer from the bank. He said that the decision from the underwriters came back rejected, as suspected Drew’s income to debt ratio was the culprit. He suggested to work on paying down some of the debt and try again. Drew thanked the loan officer quietly and hung up. He finished his peanut butter and jelly but didn’t have the energy to read any emails. He was completely defeated now. His dreams were now dashed, at least for now. He was really looking forward to starting his art center. He thought on it a little more and then the kids came back, which he perked up as they needed to finish a fun papier mache project they were working on before lunch. When school was done, Drew decided to take the long way home. As he was riding along the dirt path surrounded by trees, his phone rang again. He pulled over and answered his phone. It was the loan officer again, he realized that he meant to tell Drew he left his driver’s license at the bank the first visit and asked if he would like to come get it before the bank closed tonight. Drew said he would and didn’t realize he left it there as he reached in his pocket and looked inside his wallet and saw the empty card slot. He thanked him and said he would head there now. Drew slid his wallet back into his pocket, but something was in the way. He pulled out that small, black book he found. He would ask at the bank about it when he got there.

Upon his arrival at the bank, it looked like they were about to close, but the doors were still open. He went in and asked for the loan officer that called him. He was told the loan officer left, but someone would be out to help him in a moment. Drew felt lucky he made it in time, since taking the long way home was mind-clearing, but it was much further of a ride to get to the bank quickly.

A man in a three-piece suit came out from around a corner and said Drew’s name and Drew waved slightly in the direction of that man. The man introduced himself as Barry McMann and he was the president of the bank. Drew shook his hand and introduced himself. Drew said he was told he left his driver’s license here. Mr. McMann handed the identification card to him. Drew thanked him and as he reached for his wallet, he felt the small book and pulled it out of his pocket. He asked Mr. McMann if he could leave the small book with the bank as he found it right outside under where his bike was park when he was here for his appointment.

Mr. McMann examined the small book and opened it and flipped through a some of the pages. His eyes got wide and he thanked Drew for bringing it in and he would take care of it. Drew said he probably would have brought in sooner, but he had just got some sad news about the probability of getting his loan request approved and said he was wanting to open an art center. Mr. McMann listened closely to Drew. When Drew finished, he thanked Mr. McMann and left.

The next day, Drew was getting ready for his workshop in the park when his phone rang again. He answered and it was the loan officer asking if he could come by the bank right away, as Mr. McMann would like to see him. Drew politely declined as it was art day in the park but said he could stop by later. The loan officer said he would let Mr. McMann know, who decided to go to the park to see Drew instead.

Drew was busy with all the people who came to the art workshop as Mr. McMann watched Drew in action. He was pleasantly surprised to see the turnout and the way Drew interacted with everyone. He could tell Drew was passionate about art. Mr. McMann waited and watched until the end of the workshop and the last person left and approached Drew and offered to help him clean up. Drew was surprised to see Mr. McMann and asked if Mr. McMann would like to do an art project of his choosing.

Mr. McMann said his visit will be brief and said that as the news announcement stated there was a cash reward for the return of the small, black book. Drew looked up with a puzzled expression. Mr. McMann handed Drew a check. Drew took it but didn’t look at it. He thanked Mr. McMann and said he will buy more art supplies with it. Mr. McMann now looked puzzled as he noticed Drew didn’t even look at the check, but decided he find out when he deposited it. Mr. McMann said goodbye and left. Drew finished cleaning up and rode home.

The next day, Drew stopped by the bank to deposit the reward check Mr. McMann gave him so he could go replenish his art supplies for next workshop. The teller processed the check asking if Drew would like it all in checking. Drew said yes all of it in checking and gave him his bank receipt. Drew went home, grabbed a beer, and turned on the television and sat on the couch. The news was on and there was an update on the story and reward of the missing small, black book. Drew leaned in to listen more closely. The news announcer said the little black book was turned in yesterday and the owner delivered the reward to that person today. Drew raised an eyebrow and looked side to side and grabbed his wallet. He opened it and grabbed the deposit receipt and gawked at the amount. Mr. McMann gave him a $20,000 dollar reward check. Drew began to cry filled with gratitude as he thought NOW he can open his art center. As Drew calmed himself a little bit, he started to wonder what could have been so important in that mysterious little black book.