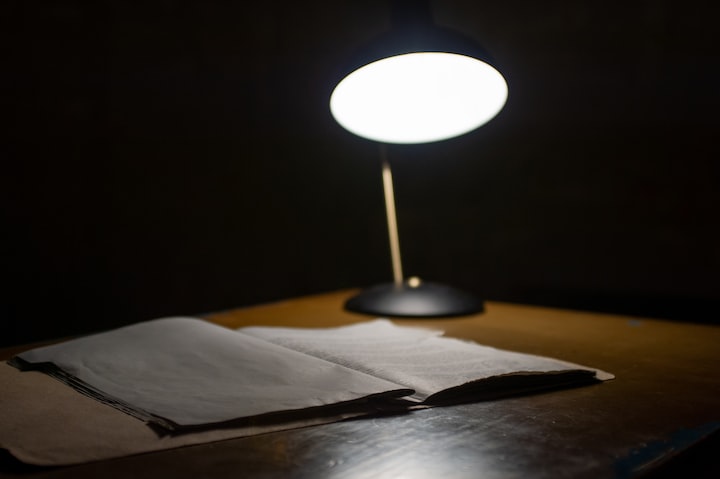 A melodic shrill woke me from my sleep. I wasn’t long in bed having just completed a nightshift. I turned onto my back and rubbed my eyes. I turned my head to see my phone lighting up. The melodic shrill was my ringtone. I’d forgotten to put it on vibrate. I grunted and glanced just in time to see it said private number. I shrugged and settled back into my pillows. Barely a minute later the phone started ringing again. I covered my face with a pillows then threw it across the room and grabbed my phone.

“Hello?” I tried to keep the anger from my voice but I didn’t succeed as the person on the other end hesitated.

“My name’s Carl Patterson and I’m sorry to be the bearer of bad news. But your Great Aunt Martha Kerns has passed away. I’ve been left in charge of her estate and your name features quite a bit,” he paused. “Are you available on March 16th at 9am to attend the Will reading?”

This caught me off guard. I’d no idea who Great Aunt Martha was. She must’ve been on my fathers side. A side I knew nothing about as he died when I was five.

“I’ll have to check my work schedule. Can I get back to you in, like, 5 minutes?” I ask and he replies yes and I quickly grab a pen from my bedside drawer and write his number on my hand and hang up. I go into my calendar, scroll through to March 16th… and of course, it was one of my precious days off. I roll my eyes but add in Will Reading. I quickly ring Carl back.

“Hey, yeah I can be there. What’s the address?” I ask and Carl gives me the address of somewhere in the city. My hand was pretty full by the time he had finished listing off what floor and room I needed to go to.

When I hung up, I found a notepad and jotted down all the information from my hand onto the paper. I sat down at my desk and began to wrack my brain for any mention of a Great Aunt Martha but came up blank.

‘Maybe they’ve made a mistake?’ I wonder as I repeatedly clicked the pen. I glanced at my alarm clock to find it was 9:43am, meaning I’d been in bed less than 2 hours but I was awake now and confused yet curious. I made my way to the kitchen and flicked the kettle on. Making coffee was something I did on autopilot mode.

Her name circled in my brain. The kettled clicked off. I made my coffee and drank it as I stared blankly out the window.

I open my phone and go to my contacts and ring her number.

“Hi, yeah it is. I got a weird phone call from a guy called Carl Patterson. Says he’s in charge of the estate of someone who is apparently my Great Aunt. Martha Kerns, ever heard of her?”

“Mum? You there?” I ask and lift the phone from my ear to check that I hadn’t hung up by accident. “Mum?”

“Yeah, still here. She was you fathers Aunt. Strange old bat. Never married, no kids. Came to our wedding dressed like she was at a funeral. Think she came to Christmas once, just after you were born but that’s it,” mum replied in a shaky voice.

“What aren’t you telling me?” I asked, my foot tapping with impatience.

“There was a rumour that the man she was engaged to in her early 20’s died in unusual circumstances. Nothing more came of it. But she somehow got his house and money. But like I said…all rumours,”

“Well, this Carl fella says my name is in her Will a lot. I’m going to a reading next week.”

We chatted a bit about what Carl Patterson said then general chitchat before hanging up. I decided to google Carl. He had a legitimate law practice at the address he had given.

The story my mum told me about Martha bounced around my head any time I paused my work. It was getting frustrating. I looked at my calendar and counted the days.

‘5 days. Just 5 days then you’ll find out who this woman is. Maybe she’s left something valuable?’ That made me smile as my car insurance was nearly up. My mind wandered and my work was left undone. I daydreamed so long that my alarm to wake me went off, meaning it was 2:30pm.

I made lunch, food for later and packed my satchel with everything I needed. I usually left the house around 4pm but I was too antsy and left early.

I counted down each day. I didn’t know why I was nervous. Maybe because I knew nothing about my fathers family. I didn’t know if I was going to be the only one there or if I was about to meet several new family members.

My days played out slowly. But March 15th finally rolled round. I laid out my best suit and practiced introducing myself in the mirror.

I barely slept. My mind wouldn’t settle long enough. I gave up trying at 3am and decided to get some of my pent up energy worked off on my treadmill.

I stood at my front door, hand on the doorknob, dressed in my suit and satchel at my side. Then forced myself out the door.

I arrived at the legal aid office 15 minutes early and made my way to the office Carl had told me to. His receptionist told me to take a seat. I was alone. No weird family members. My leg started to bounce with a mix of nerves and impatience.

“Doctor Grey!” A small elderly man in a tweed suit greeted as he opened his office door. I shook his hand and he motioned for me to take a seat and closed the door behind me.

“Yes, it appears your Great Aunt was a rather solitary woman,” He lifted a thick paper folder from a drawer in his desk and opened it. “Shall we begin?”

“I, Martha Kerns, am writing My Last Will and Testamnet with sound body and mind on January 1st, 2000. As I have no heirs of my own, I leave my entire Estate to my Great Niece Laura Grey. My funeral has been arranged and paid for.”

“That’s it?” I asked in disbelief.

“Yes. It appears so. I have the address of the property, the financial gains and list of miscellaneous items that are included in her Estate,” Carl explained handing me the folder. The first page had an image of a decaying grand Victorian-era home with the estimated sale value which made my choke in surprise. “Would you like some water?” Carl asked, concerned. I shook my head and read the details of the house, it’s contents, other goods (which included a car) and the money I had been left.

“Mr Patterson. Is this a joke?”

“Of course not! I was Mrs Kerns lawyer for many years. I oversaw the Will signing,” he straightened himself in his seat. I’d clearly offended him.

“I’m not being rude. It’s just…this all comes to a total of around thirty million pounds,”

“Correct. And my fees have already been paid. So…it’s all yours.”

We discussed when I’d be able to pickup the cheque and keys to the house, then parted ways. When I got home I sat in awed silence for at least two hours, reading and rereading my copy of Marthas Will and everything I’d just inherited.

I’d received the keys to the property and couldn’t wait any long to have a look.

The house looked even more run down than the photo in the Will but just as imposing. The door creaked open and I was greeted with the overpowering smell of dust and damp.

As I explored the house it became clear that Martha had been living in the back couple of rooms on the ground floor; the kitchen, a living room that was also set up as a bedroom and a small bathroom. These rooms weren’t as neglected as the rest of the home but just as cluttered.

I had no idea what I was going to do with all this stuff. I didn’t know if any of the items were antique and valuable or useless junk.

I sat down on a worn armchair and began looking through some boxes stacked at its side. They were all filled with photographs. Some had names and dates or places jotted on the back and others were blank. I started to notice reoccurring faces and then I found some faces I knew well. It was a photo of my parents and me as a newborn. I felt a sad smile tug and my mouth as I placed the photo back in the box. Martha clearly loved all these people, yet had somehow slipped into obscurity.

That last box was heavier than the last few. It was packed with photos of, who I know knew to be Martha, in her younger years. Every few photos she was pictured alongside a new handsome man and it was clear all of them were infatuated with her. When I came to the bottom of the box I discovered why it was heavier that the rest. There was a little journal style book bound in black leather with a small brass clasp. I popped it open and flipped through the pages. At first I thought it was an address book, as it was filled with names but upon closer reading I realised all the names were male, there were dates and then numbers under each name. Some numbers were in hundreds others in thousands. There was page after page of the same thing. Then one number jumped out at me. It had a pound sign at the beginning.

I nearly dropped the book with shock. Martha had somehow been wrangling money out of these countless men for decades! No wonder she had thirty million in the bank!

I had no idea what to do with this information. No doubt a lot of these men would be elderly or even dead and there were no addresses or phone numbers. There was no way for me to get in contact with them to find out how and why Martha had their money.

I pulled out my phone and started googling some of the names and just like I had guessed, most were dead.

I say most because there were a number of them talked about in news articles, usually listed as missing or about their death being suspicious.

‘Holy shit. The rumours my mum spoke about…was there a chance they weren’t rumours at all?’

This was a big house with a lot of rooms and I’m sure many closets.

I just hope I don’t find any skeletons in them.

More stories from Emma Diane McManus and writers in Families and other communities.