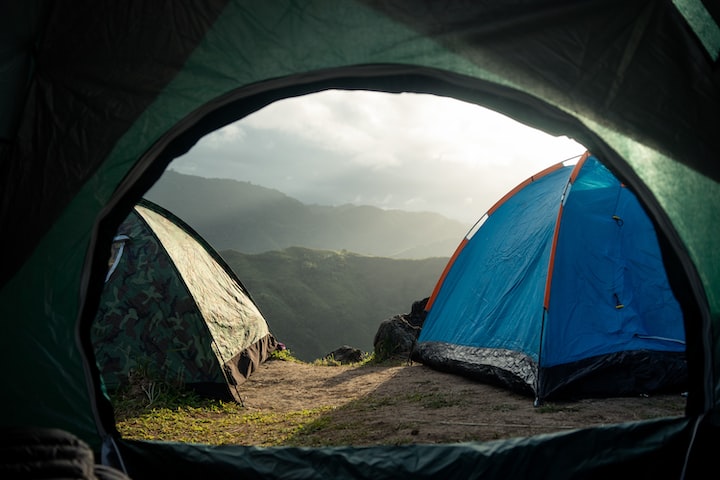 Photo by Kenneth Gaerlan on Unsplash

My hands are so cold, they feel like bricks filled with electrical volts that shoot up my arms down my body and down my legs. My feet are beyond that point now, there is no feeling in them at all. I zip my tent closed and and light my one candle I have left.

The wind is howling outside, I wrap myself in the cardboard I found earlier today while dumpster diving. It’s hard to believe that just one year ago I was flying to Europe first class.

My wife and I always have supper together, we are very fortunate to have 9-5 jobs. She is a welder and I am a chef at a well known high end restaurant in New York. We have had problems in the past with infidelity on my part, I slept with one of the hot waitresses. When I came forward to my wife she was very upset and felt betrayed. We decided to have a child to repair our relationship. We soon realized that our daughter was the only thing keeping us together. After our daughter left home for college we agreed we would get a divorce, once we new that Sally had everything she needed. Well that didn’t happen because she had to come home for Christmas and we put on an act that all was good. During the break my wife and I separately spent time with her, shopping and visiting family and friends. I loved her so much, she is the reason to breath, wake up each day, she is my light. She was taking nursing at the university in Arkansas. One day on one of our outings we decided to buy each other lottery tickets and put them in our stockings for Christmas.

New Year’s Eve was the big splashy five million dollar draw at midnight. My daughter and I took our tickets out and one, two, three numbers were the same as it was being announced on one of the news channels. I looked down at my ticket waiting for the next three numbers to be announced. My heart was racing, my breathing became erratic and then the next two more numbers were the same. I couldn’t believe it, we all were so excited. Then a commercial came on before the last number was called. I couldn’t believe that I only had one more number and I could possibly be the winner. I started to sweat, my ears were ringing and almost felt like I was going to pass out. I had to sit down to catch my breath. My daughter was behind me and my wife was standing beside me with her hand on my shoulder. I took a moment to look at her and realized that these two women were the most important people in my life besides my parents.

Then, the last number was called. It was 32. I looked at my ticket, looked at the TV and the two women. I jumped up and said we won! We all hugged each other, cried, and hugged again. We were so excited. What a way to start the new year! Best New Years EVER!

The next day we got pictures taken, collected our money. Life was good, I was still overwhelmed at my luck, and all the money. I decided that I would give our daughter a million dollars on the condition that she finish her education, and my wife two million and myself two million. We could do whatever we wanted with our money. Help friends, buy toys ( that is mostly me) and decide what we wanted to give to our parents ext. ext.

The first week was great, I felt on top of the world. I got phone calls from people from all over congratulating us, and some even asked for money. I did give some away and did help a few friends, but that was about it. My daughter decided that she wanted to finish her studies in Europe, while she did her studies she would also travel. I was so happy for her. Then, my old girlfriend called and I was curious to what she wanted so I met up with her one night and I stayed with her at the hotel for a couple of days. When I got back home all there was in the house was a letter, a few household items and everything was cleared out. My wife left me.

For the next month I had parties every day, drank a-lot and my girlfriend moved in. She picked out everything we needed and hired a very expensive decorator. I bought my neibours house and built a three car garage, and put in a pool. In the garage I bought a boat, a new truck, and an RV. I also bought a return ticket for me to Europe to see my daughter in the fall. Summer was fun, lots of parties, and camping. But, with no money coming in money was depleting very fast. I decided that after visiting my daughter I would apply for a job at a restaurant and live comfortably.

By the time my trip came I didn’t have much money left so I sold my RV for much cheaper than I payed but I new that I would have enough money in Europe to have a great time. My daughter was waiting for me when I got to Brazil. The feeling was not mutual when I saw her, she barely hugged me and I realized that she was angry that I hurt her mother again. I tried for the two weeks I was there to make amends and try to save our relationship, but the more time we spent together the more she drifted away. The day I boarded to go home she did not show up, it hurt very bad but I understood. The way back home I vowed to myself that I would smarten up and be a better man. I needed to get my relationship on track with my daughter.

My girlfriend wasn’t at the airport when I got back to New York so I took a taxi back to the house. I walked in and was completely floored, there wasn’t anything in my house. Everything was gone, except my clothes and a note. The note was very brief stating that we lived together for three months which entitled her to half of what I had when we met. She needed a brake from the partying and she told me to look her up once I got my shit together. I walked into the garage and the truck was gone but the boat was still there. My head was spinning, and decided to get drunk for a week. It was easier to be drunk than to be sober. After the boat got sold I had enough money to fix up the place and hire a cleaning lady to clean it. My house needed a lot of work including the pool needed to be drained, and cleaned. I rented out my house so I could move into a very small bungalow( more like an attic) in New York even that was expensive. There was a bed, a bathroom (with a curtain) a kitchen all in one space. It was a place to lay my head. I applied for many jobs but they all fell through. The money from the house didn’t quite pay for my apartment so I sold most of my clothes. After I sold my house, and bought a little car the money didn’t last very long as my apartment was very costly.

Before I new it I was on the street begging for food. In my pack sack I had a tent, some money, a blanket, and a few clothes. I had set up my tent under the bridge and realized that I had everything I needed before the big win. I had a home a wife that gave me a second chance and a beautiful daughter that looked at me like I was her hero. I realized that I hit rock bottom.

Tonight was going to be New Years Eve, and I had nothing to celebrate. I wished my hands didn’t feel like bricks of ice and the jabbing sensation of electrical shocks through my body. I wondered if this was the end. I reached for the cardboard I found earlier and hoped that next year would be better.

I heard a noise outside my tent and opened it to see what was going on. In front of my tent was a brown paper box. I reached for it, and brought it in my barely lit tent with my last candle burning and opened it with great difficulty. My hands were on fire being so cold.

Inside was a card and a set of keys. Inside the card was five thousand dollars and a note. The note read:

Dad, I have hired someone to follow you since your visit to Europe. I know that you are living in a tent in the winter under a bridge. By now you must realize that money doesn’t buy you happiness, I’m sure you have had time to reflect where you went wrong. You are my dad and you have always had my back and always have taken such great care of me and I thank you for that. I know you have hit rock bottom and I will help you out once and only once. The keys are for a small trailer at a trailer park, in it you will find the necessities you need including food and some clothes, heat and hydro. The money is for you to clean up, start your life over. Dad, you get one shot to make it right. You have to prove yourself, be a better man, because in nine months you will be a grandfather. If you clean up your act, get a job, be a better man then I will proudly let you be apart of my life and hold your grandson.

I had tears in my eyes as I read the letter for the third time listening to the fire works go off in the distance. I can’t believe that my daughter is pregnant with my first grandchild. I swore that I would make her proud, and I would never take anyone for granted again.

More stories from Leslie Strom and writers in Families and other communities.