Short fiction on sisters and cake. 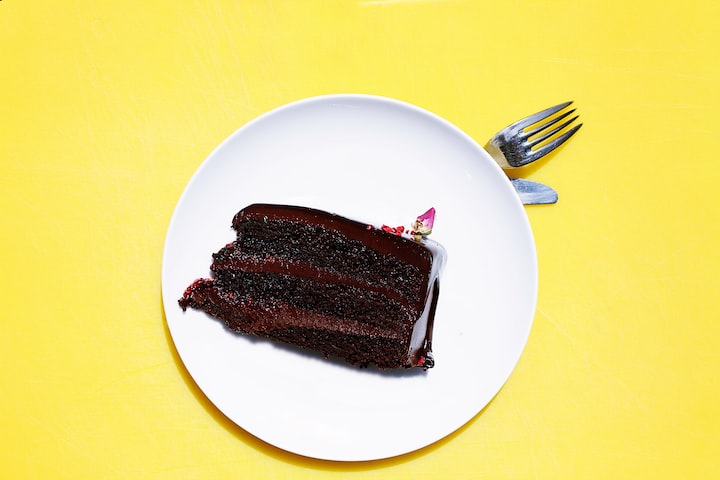 I’m standing under the ‘Cake Mix’ sign in a grocery aisle trying not to have a meltdown or pee, both of which I desperately need to do. First, vanilla or chocolate? Funfetti? She never likes anything. Should I even make a cake or just get the cake mix for cupcakes? Can you make brownies with cake mix? Because brownies would be more casual. After that, THIS is the trick right here. She’s not even going to come, so you make as well pick something you like since you’re the one going to be cry-eating it alone tomorrow night reading her texts full of lies and bad excuses. And of course, why don’t they more prominently display where the restrooms are in this place??? I have 10 minutes left to finish this errand, $13.20 in my bank account, and 3 hours until Mallory presumably arrives at O-Hare Airport for her birthday weekend.

This is stupid. This whole thing is stupid, I think as I furiously storm away from the row of choices. I exit out the Jewel, momentarily afraid I’d be stopped for shoplifting even though I hadn’t taken anything.

I walk the five blocks home up to my apartment, pee, and realize I’m out of dog food. Or more aptly, my dachshund-corgie mix Yoshi is out of dog food. So I trek back to the store and buy Organic Free Range Puppy Plus food and a box of Cost Plus Choco Cake Mix.

Yoshi gratefully eats his breakfast as I put the red cake box into my empty cupboard, shutting the shelf door a bit too harshly.

“Well shut the damn door you wacko” was the last thing Mallory said to me, the last I saw her. Last Spring in her Atlanta studio. She had dropped her Ziploc bag on the bathroom floor, let it spread out, and was having a blast sniffing the white powder up through the tile cracks. I respectfully shut the bathroom door... then shut the front door... then left completely.

“Oh we really can’t do that here. I just don’t want Yoshi to lick up any residue, you know?” I practice aloud in my apartment, trying to nail a casual tone.

“No worries. You got a porch or fire escape thing?” She’ll say back.

And then we’ll go to a bar. And she’ll ask me to come to the bathroom with her. And I’ll make up an excuse, like that I have to actually wait for the server so I could change my order. And she’ll go alone. And then two hours later I’ll be pulling Yoshi away as Mallory lays on my bathroom title scream-singing a song she made up about punching a guy at a bar while kicking my door shut with her foot. And the next day Mom will call asking how she was. And I’ll lie. And lie and lie and lie.

“Just landed in O-Hare! Visiting friends then I’ll get to your place for birthday stuff around 2?” Mallory's text offers.

“Ok!” I oblige back, adorning the tone with a few birthday-themed emojis. There's a Cubs game starting around 2. I could watch that alone all afternoon. Maybe watch some postgame highlights until Mallory likely calls around 8pm, scream-shouting at me to pick her up from a bar in the Loop.

So imagine my utter surprise when I receive a knock on my door at 1:58pm.

And the knock was hit by my sister’s hand.

And imagine my surprise when I open the door and the birthday girl yells “Surpriiiiise!” at me.

“Mallory! What!” I exclaim and we went in for a brief hug. She smells like rosewater face mist. We pull back. She looks nice. Even Mom would say she looks nice. Her eyes are focused on me, her pupils large with excitement but not unnaturally so.

She walks inside and I instantly regret every home decor purchase I’ve ever made. Her focus is diverted instead to Yoshi, who instantly accepts her as family. Darn your blind loyalty, I think. If only you could understand what she’s done to me.

“How are you doing?” I ask. “Also happy birthday.”

“Thanks! Dad sent me a card like a week ago. Like, a kid’s birthday card. It was really cute.”

I laugh. Pause. Then ask again.

“Good. Met up with Tyler and Cate. We went bowling downtown. Flight was insane. Laguardia’s a shitshow now that there’s doing major construction. Adding like, two more terminals or something.”

“You flew out of the Laguardia? Connecting flight?” I’m confused.

“Literally in Queens. I got a place.”

“Did you tell Mom and Dad?”

Yoshi paws at me. I go and grab a bone from above the fridge and toss it to him. While there, I pull out a beer and pop it.

Mallory’s staring at me with dark eyes but keeping her smile light.

“I posted it on Instagram! My empty studio back in Atlanta…signing my new lease, everything.”

Thanksgiving. Nice. Real cool, bringing that up. She’s still bitter that I had the reflexes to duck out of the way of that potato and that it went through the wall instead.

Before I notice, my first drink is done.

I make a motion, jokingly ducking my head. “Eye of the Tiger.”

“I’ll unblock you.” She diverts, grabbing her phone from her pocket.

“So how have you been?” I rephrase. Her face is down on her phone.

“Really good. I do a meal-kit delivery service and everything these days.”

“Mom and Dad floated me the first two months but yeah, I just got an offer. I start next week.”

I never got floated. Wish someone would float me a few months. Picture me, sunbathing on a pool lounger, Pina-Colada in hand. Floating. Before I realize, my second drink is done.

“Midtown. It’ll be like a ten minute subway ride each day. It’s a copywriter gig. Not exactly the ‘writing’ I want to do, but still has writer in the title. So that’s a start.”

“That sounds impressive.” I add, over the sound of a beer tab popping.

“Are you impressed?” She asks innocently, moving to a chair I found on the curb, dragged home, and cleaned like newish.

“Well, you’re all turned around! You’ve, you know, pulled it all together.”

“That’s stating what I’ve done, yes. What about you, how are things?”

And it went downhill from there. No, it was already going downhill. Somehow a fourth beer entered my hand, then was gone. There was definitely a fifth/sixth. My eyes are suddenly hit with light.

“So do you want to get lunch?” I ask vaguely.

My vision comes to and I’m sitting on the floor of my bathroom, arm swung over the toilet like an old pal.

“You got wasted. Like, out of nowhere.” She’s holding up my hair.

“Dunno. You just kept throwing them back. Then you fell asleep. Yoshi and I have been watching Jeopardy all evening. Then you woke up and came in here to puke.”

Mallory sits down next to me. “It’s ok. I get it. Just work on sobering up and I’ll put Jeopardy back on.”

“Nah, I’m still trash. I was so trashy to you for so long.” She shrugs. Yoshi comes in and tries to lick my face.

“This birthday is trash. You should’ve stayed with Tom and Cate. Oh my god, I messed this up so bad.” I can’t stop myself. Maybe a few tears come out. “I made you a chocolate cake!”

I stagger up, run around to the kitchen, and come back with the red cake box. I present her gift as I sit back down on the tile floor.

“Chocolate. Love it.” She smiles at me. A real one. She opens the box up.

“I know this is gross but…” Mallory reaches her fist into the box, pulls out a handful of the dark powder, and shoves it in her mouth.

“Am I still drunk?” I ask, genuinely.

I reach in, grab a little, and place it on my tongue.

“Haffy Birfday!” I exclaim, mouth caked over with the sticky powder. My teeth feel like they’re wearing little sweaters.

Mallory laughs, chokes, and snorts some of the choco mix out of her nose.

We utterly break down, destroyed by laughter.

More stories from Hytes and writers in Families and other communities.