Living With The Memories

by Alice Farmer about a year ago in children
Report Story

Even When He No Longer Can 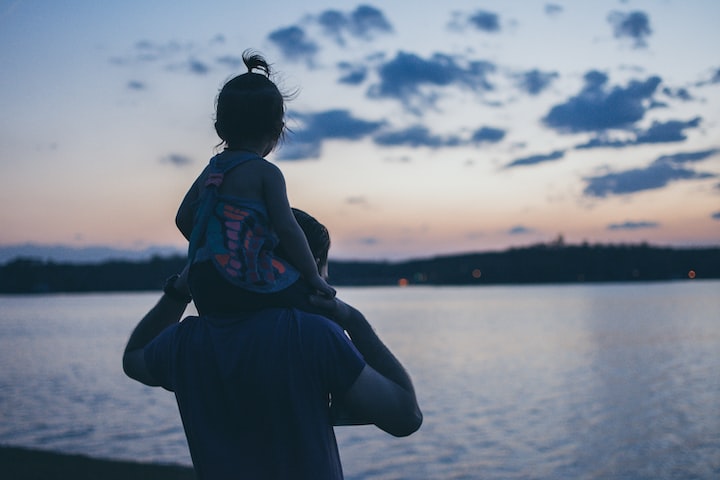 Photo by Brittani Burns on Unsplash

To many people, family is the most important thing. Whether its the family we were born into, or the one we chose, having this sense of community with those closest to us is an unparalleled feeling. It can be as uplifting as it is heartbreaking, and the latter is what this blog will be about.

Such a potent word, inviting so many different emotions. And its the word that I'd use to describe the situation that I've fallen into perfectly. Let me explain.

I'm sure that when each of us was a child, one of the people we looked up to the most were our Fathers. To our tiny selves they were so many wonderful things : strong, caring, smart, brave. They were like our own personal Superman. If we got tired on a family trip out, who would be the one to carry us to the car? When we wanted a better view, who would lift us effortlessly onto their shoulders? When we were sad, who would put a smile on our face again? For a lot of people reading this, the answer will be "My Dad".

I will happily and proudly say that I am one of those people. I remember the school nights just after my favourite show ended, and how my Dad would carry me on his back and walk on all fours up the stairs just like the magical creature did for the girl in the cartoon. It was by far and away the best part of my night, so much so that I still clearly remember him doing it.

Fast forward to the dreaded teenage years, and I find myself unknowingly falling into the classic "Teenage Girl Stereotype". Now, I'm certain that this will fit more than just girls of this age group, but it'll be quicker and easier to just sum it up as the above.

Everything was fine with me and my Dad. We had inside jokes, would laugh at dumb things, and shared many interests, and although I can't pin point the exact moment, it's as though one day I woke up and decided "Hmm, I'm going to start being difficult". That was all it took. For the next couple of years our relationship became strained. We argued over the pettiest of things and the precious relationship that we had just kind of got torn up. I'm told that my Brother had similar arguments with our Dad at around the same age as me, but I was stubborn, and stupid and so damned determined to keep up this difficult act, even though there was no reason why.

One day, a few years after the start of this behavior, and whilst I was in the midst of my first glimpse into what depression was, my Mum came into my room and sat at the foot of the bed. I was just on my laptop at the time and didn't know why she came in, but as she spoke I could feel it.

She told me that my Dad had started taking anti-depressants which was something unbeknownst to me at the time, and although she never directly said I was a reason, I could tell that I was. It was a fact that didn't need to be made apparent, I just knew. Given how I was feeling at the time, I could only imagine what he was going through as it must've gotten too bad if he had to be given medicine for it. So, from that day, I swore I would be a better daughter.

I had to be a better daughter.

And I changed. It's like I unconsciously flipped a switch and I had no more angst towards him. I initiated the old jokes we used to make, I made sure to spend extra time with him when I was at home, and I kept him up to date with the goings on of my life. Slowly but surely our relationship had healed, though the scars of those years will always be there in the background.

It happened more and more often, his mood can flip in an instant, and his mind is no longer what it used to be. It seemed like all of those little things that we used to laugh at were hinting at something bigger, but none of us did anything. Not until recently.

Fast forward again, for the final time now, to the present day. Last month he had an MRI scan to see if there was any physical reason as to why he couldn't remember much anymore. After a week or so of waiting we got the news back. "An atrophy of the Temporal Lobe".

If you aren't a science-y person like me, looking up that phrase will yield some results, one of the top ones being Dementia.

As my Mum told me what the doctor told her I could see my Dad silently breaking. His mood was shattered and for the immediate days that followed he spoke as though he was going to die the next day. "You have to look after Mum" he said. I promised him that I would.

He puts on a face now but I can see right through it, I think we all can, but no one wants to bring it up because of the difficulty of the topic. We let ourselves pretend that it'll be fine, but realistically there will come a time where this disease will devour this family. I can't speak for anyone else, but I have cried myself to sleep over this, as I write this article I find myself crying and I am terrified.

The man who seemed so strong and indestructible when I was a child is now being destroyed from within, and we all have to carry on as normal.

We have to carry on as normal, otherwise we will all be broken.

In the years to come, whatever happens, we will find ourselves living with these memories of joy and heart ache. We will have to keep going with the knowledge of everything that has happened, even if he no longer can. We will live with the ghosts of the past, as we become ghosts ourselves.

When my Dad can no longer remember the happy moments of me and my Brother's childhood, we will remember for him so that he won't ever be lost in the heartbreak.

My advice to any teenager out there who is currently on the outs with a parent for a petty reason : just stop. Make amends, be the best child to them you can be, appreciate them with your entire being. You don't know when it'll start crashing down.

Wishing you the best,

After years of no writing I've decided to give it a go again and see what path it takes me down. I've always had a love for literature, and I'm looking forward to learning all sorts of new things along the way~

More stories from Alice Farmer and writers in Families and other communities.