by Cillian Martin about a year ago in literature
Report Story 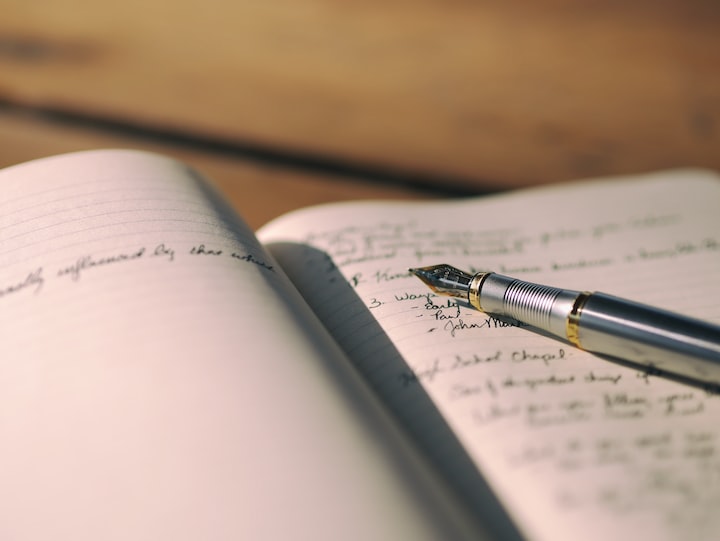 “To my son— I bet you weren’t expecting to hear from me. ‘Better late than never’, as they say.”

When that small black notebook arrived in my bundle of mail, taped shut with my name and address hastily scribbled onto an index card and plastered to the cover, I didn't know what to think. My father and I had a tentative relationship, at best, so when my mind registered that the handwriting was his, I expected the worst. I left the notebook on my breakfast counter, in plain sight to remind me that it was there, but still sealed because I wasn't sure it was worth the potential mental anguish to open it. I even considered throwing it in the trash. Burning it. Returning it.

“Boy, I hope that you don’t throw this out.”

One Saturday night alone in my apartment, I went to refill my gin and tonic, the hum of a quiet musical instrumental in the air. Unscrewing the cap to the gin bottle, my eyes were drawn to the notebook once more. I went completely still. It was as if the small black notebook, inanimate object that it was, called to me. Don’t ignore this.

“I hope that you decide to read this sooner rather than later because if I'm being honest, my time is short.”

Snatching the notebook from the counter, I turned it over in my hands, inspecting it from all sides. His handwriting on the index card somehow irritated me. After years of no communication, he had now decided to insert himself into my life again? As if he hadn't been there for me when I needed him. As if he hadn't disagreed with the choices I made and the path that I took.

“Listen, I— I know that we've had some disagreements over the years. I know that I haven't always been there, and when I was, I wasn't the most supportive parent. Your mother was always so much better at that than I was.”

I reached for the paring knife from the knife block on the island, the feel of the cool metal in my palm chilling me to the core. After silent moments of consideration, where the thought of stabbing the notebook through the middle popped into my mind, I took a deep breath and closed my eyes. Whatever this was, he had taken the time to seal it and send it to me, so I would be respectful and see what he had to say. The knife delicately sliced through the packing tape along the edges. Each slice was absurdly loud in my ears, drowning out the music in tandem with my racing heartbeat.

“Unfortunately, she was taken from us in that car accident when you were little, and I was left to raise you alone. It’s not how I had hoped things would go, but as you know, we take what life throws at us and we make do.”

Once through the tape, I tossed the knife onto the cutting board and placed my hand over my mouth, surprised at how my breath shuddered from my lungs.

“Seventeen is such a young age to leave home and attempt to support yourself. I still have the letter that you left that night: explaining why you left, promising me that you would stay safe… giving me more respect than I deserved at the time. And you ended it with a simple, Love you. God, I hope that you know that I love you, too. From the moment that you came into this world until I leave it, I will always love you, my son.”

The first thing that hit me was the smell of cigar smoke that permeated the pages. It conjured up the images of how he would park himself in the living room in front of a roaring fireplace, light up a cigar, and flick on the antique radio just to zone out listening to oldies. Honestly, it wasn’t that different compared to what I was doing on that Saturday night. My attention was then drawn to the pages themselves, each one filled with his looping cursive. The softness of the paper itself, in contrast with the typical pressure that he used when he wrote, leaving impressions on each page that followed and the soft sound of crinkling as I flipped through. Notes and sidebars were written on pale yellow sticky notes and layered on some of the pages, an explanation of each thought.

“This notebook and its contents aren’t what you deserve; this doesn’t make up for 10 years of distance and depression on my end, and another 10 years of stubborn ignorance not reaching out to you sooner. I owed you so much more than a roof over your head and food on the table. You needed affection and understanding, and I didn’t provide that. Hindsight really is 20/20, and I’ve learned that the hard way.”

I closed the notebook, holding it between my palms. I was wary. Was he trying to sway me to contact him? Or was he trying to make me feel bad for staying out of contact for so long? I didn't want to fall into the guilt trap, but my curiosity had already been poked and prodded for a good couple of weeks by setting it on the counter as I did. I just had to know, my fragile ego and emotional state be damned.

My hands slowly released their vice-like compression on the front and back covers. Taking a steadying breath, the pad of my thumb poised on the edge of the front cover, I eased it open—

Only to be greeted by another sticky note with the word STOP in all capital letters. Beneath that note was another, instructing me to Begin at the end.

“This isn’t nearly what you deserve, but it’s the best that I can do.”

My hands shook. I took a swig of gin in an attempt to calm my nerves. Flipping through the notebook to the back, I noticed that every single page had been filled. With how many notes he had added, it’s no wonder that the notebook was swollen the way that it was. A few pages before the back cover, there was another sticky note that peeked out of the side simply labeled START.

“In the event that this reaches you in time, I would greatly appreciate it if you gave me a call. In the same breath, I completely understand if you won't."

The handwriting on these pages was visibly weaker, shakier than the few examples I had spied during my initial flip-through. These pages were also spattered with what looked to be tear stains— hastily swiped away and pen traced over the words affected as if to resist showing any weakness.

“If you do try to reach out to me and can’t get in touch, well… it must’ve been my time. And that… that’s all right.”

Tears came to my eyes as I read this introductory letter at the end of the notebook. Out of all of the things I had been expecting, that was not even a potential option. My father had never been a heartfelt, share-your-feelings kind of man, even when my mother was alive, so genuine shock roiled through my body.

“Just know that I love you, son. I’m proud of the man you’ve grown into. And you should always be proud of who you are.”

My tears fell and joined the older tear stains on the pages I read, the ink blurring on contact. I touched my fingertips to the page, suddenly feeling closer to him than I ever had.

I spent the next four hours straight reading the small black notebook from cover to cover, and when I finished it, swiping more tears from my eyes and sobbing uncontrollably, I read through it again until the early winter sunrise flooded my apartment. The notebook wasn't just some apology letter; it was a chronicling of my life. Entries were dated at the top of each page, from newborn to age seventeen, a recounting of my successes and failures alike. The sticky notes for some of the entries were amendments by my father after the fact, the same shaky handwriting further explaining his pride at these pivotal moments of my life.

After my second read-through, I noticed a pocket in the back of the notebook. In that pocket, I found a slip of paper folded in half twice. When I unfolded it, a check from my father looked back, written out to me in the amount of $20,000. "This isn’t nearly what you deserve, but it’s the best that I can do,” I recalled.

Once I had collected myself, I pulled my cell phone from my pocket and dialed the phone number on the inside back cover. A hospice front desk answered, and I asked for my father. The woman on the other end adopted a carefully gentle voice as she told me that he had passed a week prior.

Coping with the loss of a parent is difficult.

With the notebook and a bouquet of yellow roses in hand, my boyfriend and I are walking up to my father's grave to pay our respects. Snow may blanket the freshly-upturned ground, but I have every intention of sitting at the gravestone and reading my favorite entries. Telling him how his descriptions of me warm my heart. Letting him know that we both made mistakes and that he wasn't fully to blame for me leaving when I did. I haven't even considered what I should do with the money, and I don't think I will for quite a while. In the end, knowing that my father accepted me, truly accepted me for who I am, that's the greatest gift that he could have given me.

We come to a stop at the gravestone. I grip my boyfriend’s hand tighter.

“Hey Dad,” I whisper, frosted breath carrying the words as the glimmer of tears sparkle in my eyes and the hint of a smile tugs at my lips.