A Match Made in Traffic

by Vaishnavi Srinivasan 8 months ago in literature

It was a busy day. 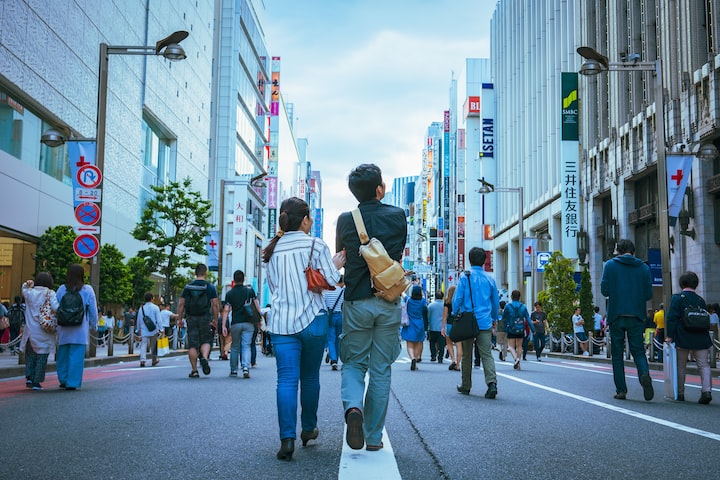 Photo by Takashi Watanabe on Unsplash

[This was a story I wrote in my early times of writing stint(!) and my writing has improved much better. Or so I hope. Do read and enjoy the little twist? at the end]

After the end of work, I was walking home. I had work left unfinished, and the traffic noise was driving me mad. I was planning to get home as early as possible so that I could finish the day's work and get some well-deserved rest. I decided to skip the gym because my mind was occupied with project deadlines. I didn't hear her the first time she called me. She called again, and I turned back. She asked how I was doing. For a split second there, I was taken aback for reasons that I was not sure of. I thought of the share-auto ride we had five years back, which I remembered for no reason other than sharing the ride with her. Also, of course, we had done our undergraduate course together. I had talked to her once or twice back when we were in college. Memories of her came flooding back. I was pleasantly surprised that she remembered me, and we shook hands. We exchanged pleasantries. I heard myself saying whether she wanted to join me for dinner. She agreed, so I took her to the restaurant where I usually have dinner. The project deadline went to the back of my mind.

We talked about our families, about what we had been up to for the past five years after college. We both were doing very well in our careers. We talked some more about the nature of work and our plans for the future. It felt good to meet someone new and share your plans for the future. I found myself sharing more than necessary with a stranger. After dinner, we said goodbye and headed our way. I had got her number.

After reaching home, I found my friends waiting for me in the common room. I was supposed to meet them an hour earlier for dinner, which did not cross my mind. I told them that I had already eaten with a colleague since there was some work-related stuff to discuss. It was better than saying I ditched them to have dinner with a girl. At that point, I realized that I had forgotten about the project deadline, which was due the next day. I went straight to my room and immersed myself in the laptop. It was 4 AM when I went to sleep.

I woke up late in the morning and found two messages from her. She had sent that it was nice talking with me, followed by a good night message at 11 PM. I didn't know why, but I kind of panicked since I had not replied to her sooner. I spent the next two hours thinking about what to respond to her, then replied with a 'Same here' and a 'Good morning' message. That day, I strangely found myself checking my phone often. I was restless, which I attributed to lack of sleep, though there had been many sleepless nights in the past without the subsequent restlessness. I didn't get a message from her till evening. I decided to hit the gym. I did my usual routine workouts, which cleared my mind from all the thoughts, though it wandered to the talk we had yesterday. After finishing the gym, I decided to head for dinner in the same restaurant. That's when I noticed a message from her. I found myself smiling, looking at it.

It was a simple smiley. I was again thinking of what to respond to her. Or maybe she wanted to end the conversation there? If she wanted to continue, she would have asked something. Wouldn't she? It was strange that I was getting all these new thoughts that had not come before. Was it because I secretly wanted to spend more time with her and kind of like her? The talk with her yesterday was refreshing and felt good. I found myself wanting to talk to her more. That's when I thought of a meet-up during the weekend. It would be casual and wouldn't sound awkward. So I asked if she would be ok to meet during the weekend for dinner only if she is not busy. She was online, and to my surprise, she said she was free and ok to meet. I wanted it to be casual but only to realize later that it sounded exactly like a date.

We didn't message over the phone after that, and the week was moving slowly. I was waiting for the weekend to arrive. I put on my best shirt and tried to appear my best self. Since my friends had gone to their hometown, there was no need to explain myself to them. Had they known, I would never have been able to meet her in peace. They would pester me with questions and make me nervous about meeting her. I arrived at the designated place, and my eyes wandered all over in search of her. She came after 10 minutes. She was looking gorgeous in a blue umbrella kind of dress. It was a simple selection of clothing, but I couldn't help staring at her. Then she smiled, and I came to my senses. I smiled but made a mental note not to stare at her or her lips which made the perfect upward curve. We went into a restaurant and found a seat. The ambiance of the restaurant was good, and she looked the type who did not care for the formality that comes with posh restaurants. I had pre-ordered her favorite bottle of Merlot which surprised her a bit. She took a sip, and we waited for our order.

She said that she was going to her hometown, hence she thought of meeting me before leaving the next day. I felt disappointed but tried not to show it. Then over the next couple of hours, we talked, dined, and headed over to the beach to watch the sunset. It had been some time since I was at peace. The calm washed over me along with the sea breeze. It was one of those moments I wanted to remember forever. After that, I dropped her at the nearby bus stop, waited for her to board the bus, and returned home. I couldn't get sleep that day, so I kept looking at my phone. She was online and messaged me 'Good night'. I said good night and told her that I was not sleepy. She said she was also not getting sleep, hence she thought of spending some time on the phone. We messaged some more and before we knew it, it was 2 AM. I asked her if she had someone to drop her at the bus stop, the next day. She said no, so I offered her a ride which she accepted immediately.

The next day, I picked her up at the hotel, and we headed to the bus stop on my bike. For some reason, we both were quiet. Whenever someone started the conversation, it was strained and ended quickly with simple answers like yes or no. We reached the bus stop 5 minutes before boarding time. She stayed back till the last minute even though we talked less. She said she felt like she wanted to extend her stay since she didn't get much time to spend here. I stared at her without saying anything. For a moment, I thought of asking her to stay here for some more time, but it was stupid of me to think that, since she had a job there which she had to get back to and she had come here only for a week. We said goodbye, and she boarded the bus. I stood there looking at the bus till it turned a corner.

The days went by, and we didn't message after that, though I thought about it a lot. I didn't want her to think that I was disturbing her, so I refrained from messaging her. As it is usual for boys of my age, my parents were looking for a suitable partner for me. They would send me photos of the girls they had short-listed, and I'd let them know my thoughts. As I was not much interested in getting married at that point in my life, I was kind of ignoring the photos my parents sent me until I saw her photo among two others in the list they sent a week back. To be honest, I was surprised and happy.

That made me message her again. I told her that I got her photo as a matrimony match, and it was funny how things turned out. She replied, asking what I thought about the match. I said that I was surprised at the coincidence. She didn't message for a long time after that. I called her to ask if she was ok. Even though she said she was fine, I could hear the slight trembling in her voice. At that moment, I instinctively knew that I loved her and told her the same. There was silence at the other end, and I gently probed her to speak. I asked her if she loved me and wanted to spend the rest of her life with me. After a silence of about 10 seconds, which seemed like an eternity, she said yes, and the moment felt like I had conquered everything the world had to offer. I felt like I wanted to hold her close forever at that very moment and not let her go.

So, that is the story of how I met my wife.

PS: We told our parents, and they were over the moon. We have our wedding in two months. Will you be there?

PPS: Whenever I tell her about the strange coincidence of meeting her just a few days before getting her matrimony match in my e-mail, she smiles at me enigmatically like it is nothing. Now that I think about it, I wonder whether it was a coincidence or was it all part of a plan. Her plan, to be precise.