by Natalie Wilkinson 7 months ago in book reviews

Tsuru; A Folktale of Japan retold by Natalie Wilkinson 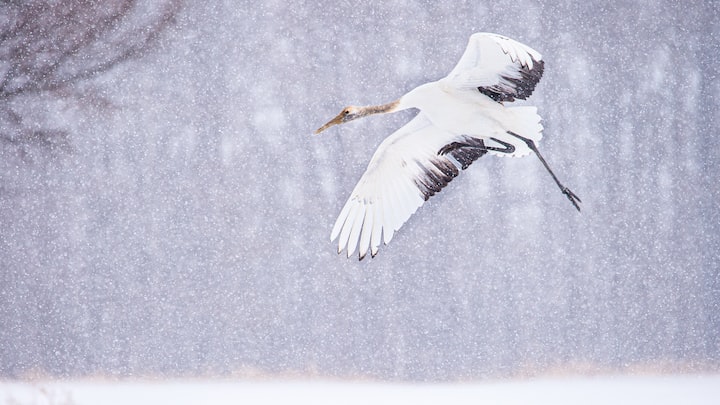 Photo by Birger Strahl on Unsplash

Although I already lived in the other world children inhabit as a child, reading was my favorite place to escape. Fairytales, lands far away, fables, myths were my favorites. The versions of stories told as they made their way from country to country fascinated me. One that has always stayed in my memory is this; a Japanese folk tale beginning with those well-worn words:

Mukashi, mukashi; long, long ago, there lived a poor woodcutter and his wife. The woodcutter went out each day into the dense forest, the mori, chopping wood to sell in the village. His wife stayed home, kept the house in order, and wove lengths of cloth to help augment their meager income.

One day, the woodcutter was trudging through deep snow and saw a flash of red on the ground. It was a crane, a tsuru, an enormous bird. It was flapping weakly in the snow with some injury. Taking pity on the bird, he brought it home to his wife. They tended it through the winter, and by spring, it was well enough to fly off. It circled their hut several times in the air as if in thanks and flew off.

The following winter was a hard one. Often the woodcutter could not create a path through the deep snow. On these days, he busied himself with fixing things around the house. One day he opened the door and, to his surprise, found a young woman, lightly clad, on his doorstep shivering with the cold. He brought her in. ‘Poor dear,’ said his wife and set her by the fire to warm up. She fussed and brought her warm soup and a blanket. In truth, she had always wanted a child, but she and her husband had none.

After several days, the young woman had recovered enough to begin poking about the house, and she found the loom the wife used to weave her cloth. She said, ‘To repay your great kindness, I would like to weave for you, but if you agree, you must never interrupt me or look into the room while I am working.’ The wife and her husband agreed to follow these conditions. The girl immediately went into the room and closed herself into it.

For a day or two, they heard the snick-snack of the loom and the shuttle. Then the sound stopped, and the door suddenly opened. In her arms, the young woman held a bolt of the finest cloth the wife had ever seen. And so soft!

The girl said, ‘Put this away to sell in the village next time you go.’ She was nearly fainting from hunger and fatigue, but the wife sat her down and fed her.

This routine went on for the length of a year or more. The woodcutter and his wife began to grow quite wealthy from selling the beautiful cloth. They treated the young woman as a much-loved musume, daughter of the house.

One day a nearby neighbor, a friend of the wife and, a somewhat nosy woman came by to visit. She heard the loom working, and knowing the high reputation of the girl’s cloth, asked if they could see the work in progress. ‘Oh, no,’ said the wife, ‘I promised I would never look while she is working.’

Well, that made the neighbor even more curious. She said, ‘What! This place is your home. Why are you allowing a stranger to tell you what you can and cannot do?’ She went on and on in this manner. After much prodding, the wife finally agreed to peak through a small crack in the door.

What she saw astonished her! A crane was on the bench pulling out her feathers and weaving them into a bolt of the most beautiful cloth ever seen. The wife let out a gasp of surprise and drew back. Immediately the door opened, and the young girl stood there with the half-finished bolt of nuno in her hands.

‘I will have to leave now that you know my secret,’ she said. ‘I am the crane your husband saved in the woods, and I came to repay your great kindness to me.’ With that speech, she kissed the older woman on the forehead and walked to the door. She flew off, never to be seen by the woodcutter or his wife again.

What is it about this folk tale that captured my imagination so strongly? As a child, I am not so sure. My memory of the book is that it had beautiful illustrations. But, as an adult, I understand the reasons I still love it. There are always truths to glean from these tales, no matter the country from which they originate. The first lesson of this tale, repeated in many other folk tales, is that kindness shown to people and animals will always come back to you. Often the return manifests itself in unexpected and delightful ways. A second lesson is that trusted people will come along and render aid when needed. And a third is that of keeping promises and the consequences that can occur when broken. Relationships can be damaged or ended with a lack of care.

There are other layers to this story for me. As an adult, I became a textile designer. I am a weaver, and I design printed fabric. I am fascinated with making something beautiful out of lengths of yarn or plain cloth. I have the desire to make each piece better as I progress. Producing fabric out of any material has somewhat of a magical quality still.

There are so many tales that use the magic of textile production as a basis for the story. In "Rumpelstiltskin" the heroine must spin gold out of straw. In "The Wild Swans" by Hans Christian Andersen the princess must knit sweaters of hops gathered in the churchyard at midnight and never speak until she completes the task. In "Sleeping Beauty" the heroine pricks her finger on the distaff (used for holding linen fibers) of a spinning wheel, plunging her kingdom into a 100-year sleep. Jason must find the golden fleece; Arachne weaves better than a goddess and is turned into a spider by her. Penelope unweaves her tapestry in Ithaca every evening to evade giving answers to her suitors while waiting for her husband Odysseus to return. In one other Japanese tale, there is the story of the Tanabata holiday celebrated every July 7th. Orihime (the star Vega) weaver to the gods, meets her husband Hikoboshi (Altair), the cowherd, one night each year on the banks of the heavenly river, called Amanogawa (The Milky Way).

Then too, there are stories based on magical clothing. "Cinderella", "The Twelve Dancing Princesses", "Puss in Boots", and "The Emperor’s New Clothes" are all much loved and repeated tales.

There are the three Fates who spin, measure out and cut the thread of life. There is Joseph and his coat of many colors. There is Rahab, a woman who saved her family by hanging a red rope from her window, although she condemned an entire city to death by the action.

The story of the Crane Woman and the Woodcutter was given to me by my parents. We moved a lot, and on one trip overseas, we children each were only allowed to bring one box of our possessions. I chose my books. When the cargo ship arrived, a crane went through my family’s shipping container. In the aftermath of the accident, the shipping company lost my box of books. Two with inscriptions and a former address noted inside the cover eventually returned to me. Unfortunately, the other books in my prized collection, including my illustrated book of the story, were never returned.

When my children were born, I began reading to them and telling stories to them at a very young age, when they reached about six months. The Crane is one among many that I told them. Though they have carried traditions of reading and telling stories of their own, this story does not have the personal resonance with them that it does for me.

I still struggle with accepting modern and movie interpretations of fairy tales, folk tales, legends, and myths, because they eliminate the nuances and possibilities of the stories. In addition, they overlook aspects of the story important to the overall meaning. They take out the universal truths and replace them with limited imagination or create unintended humor. I think the value of these stories as collected and told lies in their ability to lead children to make their own decisions about what is essential or of use in their lives.

Although this story does not end with the words, “And they all lived happily ever.” it still speaks to me of the value of kindness, trust, and faith in one another. I hope you also have stories in your lives that you can return to at times and remember events of long, long ago.

Thanks for taking the time to read my work. If you enjoyed it, consider giving me a "heart" or a tip. Praise is always gratefully accepted, criticism makes me a better writer.

I can be found Vocal with an assortment of other stories and elsewhere:

Instagram @maisonette_textiles, at Pinterest as Natalie Wilkinson, where I keep a file of folktales involving textiles, and on Etsy as Maisonette Textile Design.

Read next: 7 reasons why school life is the best time of the life