by Dawn Nelson about a month ago in list

And we don't always wear tartan 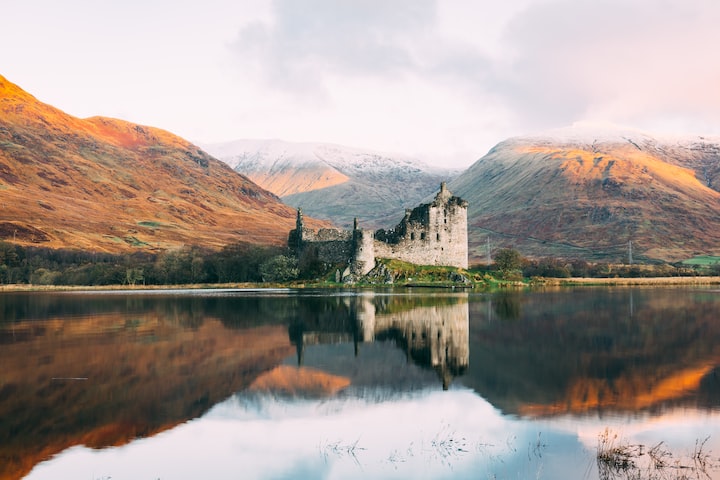 Photo by Connor Mollison on Unsplash

The Scottish national flag is a white cross on a blue background and is known as the Saltire or the St Andrew’s Cross. Created in the ninth century, it is the oldest national flag still in use but isn’t the only ‘flag’ displayed in Scotland.

The Royal Banner of Scotland, more commonly known as the Lion Rampant, displays the Royal Arms of Scotland and technically belongs to the monarch. Unauthorised use could be construed as a criminal offence, but try telling that to the legions of Scottish football fans who wear Lion Rampant flags like superhero capes at games.

Contrary to popular belief, Scottish people don’t wear tartan all the time. Tartan is usually worn in the form of kilts by men at weddings and other happy occasions, but usually weddings. And, yes, the tradition is that you shouldn’t wear any underwear under your kilt. Luckily, the kilts are heavy enough to prevent accidental flashing of genitals, but there have been incidences when particularly strong gales (or cheeky women) have lifted the kilt to bare all.

Men and some women will also wear kilts (along with a football shirt and sometimes a Glengarry hat) to support the Scottish football team at matches at home or away. Other occasions when both men and women will wear kilts will be to take part in the pipe band contests and Highland Games.

Yes, we Scots do eat haggis, usually on Burns’ Night, but we love our food and do eat a lot of other cuisines particularly those from the Far East. In fact, Chicken Tikka Masala is reputed to have been invented in Glasgow in the early 1970s by chef Ali Ahmed Aslam. There are other cities claiming it as their own, but we Glaswegians say its ours.

Chinese and Mediterranean food are also big in Scotland and you might here Scots express a desire for “a cheeky wee carry-out”, which can either mean they want a meal from the local takeaway restaurant or are off to a party with a bag full of alcohol.

For breakfast, we normally eat cereal or toast with something on it. However, we also love porridge (pronounced paw-ridge not parridge) or a cheeky wee piece and sausage. More on “piece” later, but when we are talking about a piece and sausage, we normally mean a white bread sandwich with butter and a cooked square (also known as Lorne or slice) sausage between its heavenly slices. There is also a Full Scottish breakfast. Not to be confused with the Full English breakfast, which is similar. The Full Scottish usually consists of square sausage, fried eggs, black pudding, tattie (potato) scones and bacon. You’ll often fried tomatoes and mushrooms, and sometimes baked beans, added in too.

Talking of fried food (and my mouth is watering as I write this), Scotland has some of the best fish and chip shops in the UK. You can choose from traditional fish dishes such as battered cod or haddock (Scotland offers both fish, England only offers cod) or items such as battered haggis, battered black pudding and battered and deep-fried pizza (don’t diss it until you try it) all served with chips (fries). You can also get curry at a fish and chip shop, but it’s used as a sort of garnish: chips with curry sauce. Chips come with nothing on them or you can ask for chips and cheese, chips and gravy or chips with kebab meat. We are chip connoisseurs! And, finally, yes, there are places who will, on request, deep fry you a Mars Bar in batter. It’s delicious, by the way.

We all know that Scotland is famous for its whiskies, but did you know we also do a roaring trade in Scottish made gin? There are many different types to choose from and are made all over the country, from the islands off the west coast to the cities of Glasgow and Edinburgh. My particular favourite is the Glaswegin.

But, if it’s a soft drink you’re after, why not try our own Irn Bru, a bright orange drink that is also known as Scotland’s other national drink? This is Scotland’s best-selling carbonated drink and is amazing if you’ve had one too many the night before and need a wee comforting something to quench the hangover thirst. It’s our go-to after a night on the tiles.

Okay so this isn’t one for the faint-hearted. Many of our place names are pronounced completely differently from how they are spelled. Don’t worry, even we Scots get confused sometimes. So, I’m going to give you a quick whistle-stop tour of some places you might go to or see if you ever visit this fair country.

We’ll start with some easy ones. Glasgow is pronounced: Glaz-go. Not, Glaz-gow (to rhyme with cow). To confuse matters, you might hear Glaswegians pronouncing it as Glez-ga, but we’ll not go into that. For Edinburgh, you pronounce it Edin-brah. It is NOT, never has been and never will be Edin-bro. Again, you may also hear it pronounced as Embra by Glaswegians (yes, us again), but we don’t want to overload you with too much. Here are a couple more places that outsiders haven’t got a hope in Hell of pronouncing correctly: Helensburgh (Helens-brah), Milngavie (Mul-guy) and Ravenstruther (Renstrie).

Scotland has an incredibly rich culture. We Scots love our books, our museums, our art galleries, going to the theatre and shopping till we drop. Apart from football, other sports enjoyed here include rugby, horse racing, golf, tennis and curling. We have ski resorts and some fabulous hills and mountains for scaling.

Eating out is another past-time fully embraced by Scots and we have a plethora of different cuisines to choose from, particularly in our cities. Not sure where to eat, ask a Scot who will be delighted to show you their favourite restaurant. We also love our pubs and clubs, and every weekend our towns and cities are busy with people of all ages out having a good time.

Scots love their music, which is why we fully embraced the karaoke craze when it hit our shores many years ago. Although, we don’t just limit our singing to karaoke bars. No, you’ll find us hitting the high notes in between bars on pub crawls, on the late-night bus and at house parties.

There is no doubt Scotland is one of the most breathtakingly beautiful countries in the world. We have stunning mountain ranges, amazing lochs, gorgeous beaches and beautiful lowlands filled with rolling hills.

However, our landscape is so beautiful because our weather is often bad. Do not come to Scotland expecting heat and sunshine even in the middle of summer, you’ll be sorely disappointed. No, we tell visitors to make sure they bring clothes for all weather type because you often see (and this is a popular phrase here) four seasons in one day in Scotland. That’s not to say we don’t get days where the weather is fantastic. We do, but we can’t guarantee them.

By the way, on the west coast of Scotland, a hot sunny day is often an excuse for men to go “taps aff” (tops off). I apologise in advance. I love my people, but we are some of the most pasty-skinned folk in the world. When Scots remove their tops, their skins are so white they can be seen from space. Okay, that’s a slight exaggeration, but you get the gist.

Right, so, all Scots speak English, but we don’t always totally speak English. Here’s what I mean. For instance, many of us speak English mixed in with Old Scots or use English words differently to how you might know them. Here’s some examples: you might hear Scottish people talking about going for the messages, this means they are going to shop for food. We also love our “pieces”. A “piece” is a sandwich and how you ask for it is thus: I would like a piece and cheese please (I’d like a cheese sandwich please). Parts of Scotland also speak in other dialects such as Doric in the north-east, and there are areas where they speak Gaelic.

Apologies, but we also speak very fast which can make it difficult for visitors to understand us. Please don’t suffer in silence, just say: I’m sorry, but I didn’t get that. You’re speaking very quickly. Could you please say it again, but slower? We won’t mind. We love to talk.

The Scottish people have a very dry and dark sense of humour. We’ll laugh at anything and the darker the better. Some of our best exports are our comedians who include Billy Connolly and Craig Ferguson.

Look, I’m not going to wax lyrical about the Scottish sense of humour, take a look at this page (https://www.boredpanda.com/funny-scottish-tweets/?utm_source=bing&utm_medium=organic&utm_campaign=organic) of recent Tweets and you’ll get the picture.

And as a final, final word: if you are coming to Scotland in the summer-time please make sure you bring some sort of mosquito repellent. What am I saying? Nothing really works against these flying horrors. Who am I talking about? The Scottish midge or midgie. These are tiny blood sucking insects that make our lives a misery every single year. Do not underestimate them. They are evil flying beasts the size of small spider poo but with a bite like Jaws. You have been warned.

Dawn is a writer, journalist and award winning author from Scotland. She lives near Loch Lomond with her kids and numerous pets and is currently working on a couple of new book series.

More stories from Dawn Nelson and writers in Education and other communities.