by Kaelyn Dibble 9 days ago in student 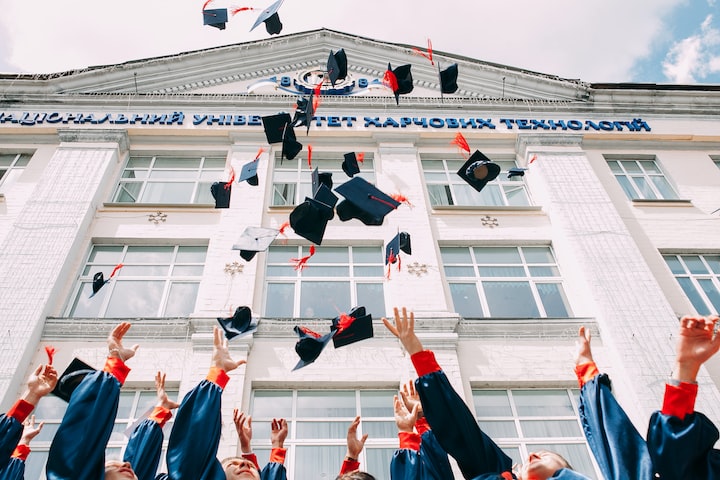 Hello everyone I would like to say thank you to any of you who may have read my first 'my high school experience' article. It is my article that has done the best by far, so thank you to all who read it, it means a lot to me. :)

My senior year of high school was very interesting. I switched schools my senior year of high school because I wanted to spend my last year having a little fun and stressing less about homework. I had the ability to switch schools because my parents moved to Montana and I did not want to go with them, I wanted to stay where I was. I was so excited about my choice to switch schools. I was ready to go to football games and a big prom and all of those other small events high school has to offer. I was very optimistic in my view of a new school until I was actually there.

My first day of senior year at a new school was really hard for me. When I was at home getting ready for the day to start I cried and was did not think I could muster up enough courage to make my ass walk through the front doors. My boyfriend, who lives with me and lived with me then, hyped me up and helped me get there my first day. Going to a new school is always scary. I happened to move to the school with the reputation of being the least friendly to newcomers and I also suffer from severe social anxiety. I must not have been thinking about this when I switched. I came from a junior class of 13 students and transferred to a school where there were 500 in the senior class alone. I had been at my old school, which was a K-12 school, since third grade but still had issues opening up in front of any of my classmates. Due to my social anxiety you will not be reading about the cool friends that I made during my last year. I started the year not knowing anyone and ended it the exact same way. I did not talk to anyone unless I had to and would never start conversations either. I was so quiet that for a long time, my teachers did not even know who I was when they saw me, even in class. looking back I really regret caving to my fear of other people and wish I had made at least one friend. On the other hand, I know I already have some really loving and supportive friends so I know it really is not that big of a deal.

Something really cool about this school that I had not had previously was the open campus. If I did not have a class while school was still in session, I could go home. During lunch I could go home or go somewhere else to go and get food. I loved it. Since the school was open campus I made it to where I got to go home early almost every day. School also did not even start until 9 so it was really cool to be done at 12 for three days out of the week. I managed to work more, have more free time and get more done overall. If there were anything I could have changed at my last school, I would have made it open campus no questions asked.

My last year was also pretty easy. I did not have much to do and I liked most of the classes that I took so I put in the very small amounts of work that I needed to put in in order to do well. Up until spring break I was staying on track and getting my work done. and as we all know very well, spring of 2020 was when my last year of high school took a very sad turn. Covid-19 made it to the US and finally people were worried about it. there were rumors that we would extend spring break until those rumors turned out to be true. Then it was extended more and more until it became the rest of the year (a quick disclaimer: I will by no means say that my senior year was different than the thousand of other 2020 graduates that struggled and dealt with confusion and stress in their last year due to Covid-19, I was not the only person that lost prom or had a confusing graduation). It was so hard for me to stay focused and keep up with the work that I was given while school was online that I stopped doing the work altogether. The teachers all gave us more work and were less likely to respond to questions and emails. I hated it and in the end the possibility of starting college online made me decide to take a gap year, something that I had never really considered before.

Corona-virus threw everyone's lives into total chaos and put a halt to everything seniors look forward to. I did not get a senior prom. Senior year was the only year I would have had someone I could really call my date to prom and it kind of broke my heart that I could not go. I was glad to hear that some people had a virtual prom or a socially distanced prom with a small amount of people attending. I was a little bitter that I never was part of any of these too, but was glad overall that some people had something similar to prom. Graduation was very confusing too. I knew other schools had an online one or some sort of drive by graduation thing, but mine was actually in person. No one knew what was going on and I was only allowed to bring two people. This sucked for me because I have two set of parents. because of this my dad and my step mom did not come to my graduation. They did not attend for a couple of reasons: they did not want to travel during lock down, travel is expensive, there was nothing to do in town, and finally because I did not graduate from the school they wanted me to graduate from. That one sucked, when my dad told me he would not be coming to see me graduate he said my graduation was not a big deal because it was just from a public school, I was very upset. Anyways, I made it threw a very confusing graduation and now can officially say that I am a high school graduate.

I am not exactly sure what else to say, so thank you so much for reading and if you feel like leaving a tip since only three people ever read these but I put a lot of time into them go ahead, if not thank you for stopping by and taking your time to read through some of what I had to say. Manifesting that the rest of your day is filled with good vibes. :)))

I have a lot of opinions. If you would like additional information on anything please feel free to DM me on instagram: https.dibbs

See all posts by Kaelyn Dibble →