by Grace Linn 21 days ago in high school 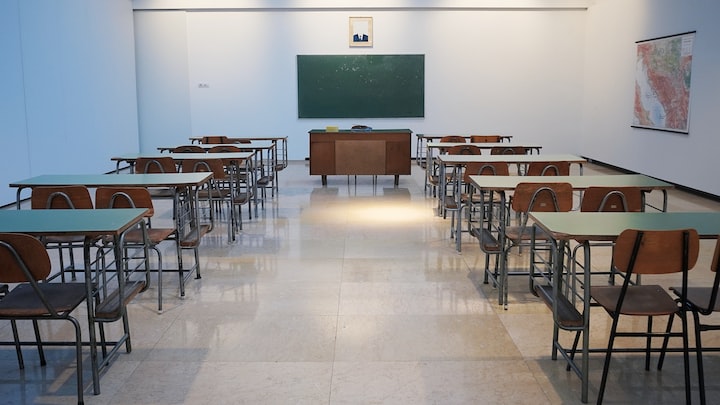 I will never miss you. You forced me to be up at the earliest of hours, despite science proving that is unhealthy for minors. You swallowed us whole for eight hours out of every single day, pumping us with verbiage pertaining to mostly useless information. Where were you when I needed to know how to file my taxes? Where were you when I needed to know how to build credit? To save for retirement? You would scream at as constantly that college was the answer to life after high school, you jammed it down our throats to where we felt asphyxiated from the pressure. You failed to make it known to us that there were other options for us to pursue, that there were many avenues we could take to achieve happiness. So where the hell were you when we drove ourselves into thousands of dollars in debt, never knowing the true implications of our actions, whilst more than likely never holding a job that our degree was supposed to help us obtain?

I will never forget how you often limited students in their capacities by judging them based upon whether or not they could analyze every word written in How to Kill a Mockingbird. Where the fuck were you when there were potential great mechanics, artists, and musicians? You valued grades above personalities when I witnessed you reprimand many students for not wanting to engage in reading discussions surrounding novels such as Animal Farm and Lord of the Flies. You forced students to adhere to a certain code as if they were your minions, not ever once considering to even attempt to foster their unique characteristics. You failed the men and women that could have become skilled carpenters, construction workers, computer science majors who are now gridlocked in a lifetime of debt for a degree they did not want that will never see an end in their debts that consume them daily.

I will definitely not forget how you limited the options for students when it came to what extracurricular activities you had available. Majority of your options were related to sports, thus insinuating that you cared only about students with athletic abilities. Where were the options for those of us who enjoyed music? Where was the justice for those of us who enjoyed literature? Where was the support in any of this damn chaos for those of us who gave our lives meaning by engaging in creative musings? You lacked show choir, you lacked a jazz band, orchestra, and AP classes. You really had a one-track mind that was centered on the athleticism of students while you squished the capabilities of students who wanted zero participation in those affairs.

I will never forget how you glorified events such as homecoming and prom. You made students cast votes on the homecoming court when the student body knew it was nothing but merely a popularity contest. You ripped away the chance for average people to shine and be noticed by an audience as you crowned the homecoming queen who you thought was the prettiest and most well-known by students. You turned prom from what should have been a night to remember to a night that many would want to forget. It took a petition to allow students to even have the freedom to dine wherever they wished to before promenade. Your miniscule budget made sure we had mediocre decorations and a mediocre DJ. You glorified and popularized an event that in reality whose importance mattered just about as much as whether or not you ordered the soup or the salad at a restaurant.

I certainly will not forget how you followed the sheep herd when it came to sex education. You metaphorically chanted "abstinence" rather than make students aware of the many options of preventing pregnancy and STD's. You laid a foundation for students to then becoming pregnant at a very young age, to easily contract STD's, for not giving them a smidge of guidance when it came to these matters which could cause irreversible damage.

I wholeheartedly resent the four years I spent with you High School. You did nothing to nurture or help develop the uniqueness of everyone who attended. You enabled a body of students to stumble around in the real world like drunken baby giraffes, while letting those same students be teased for who they were. You stood by idly as you did absolutely nothing to prepare us for the world we were about to enter. Your neglect fueled me to strive daily to discover the person I am supposed to be, my anger towards you inspired me to search far and wide within myself on what my purpose was. I chose to not let my emotions towards you hinder me from accomplishing great feats in my lifetime. And for that I can genuinely say thank you. Even though you preached to students that one day they would "miss this", you will never convince me that I enjoyed that four-year period of my life. You will never suck me into that trap. And I will never, NEVER miss you.