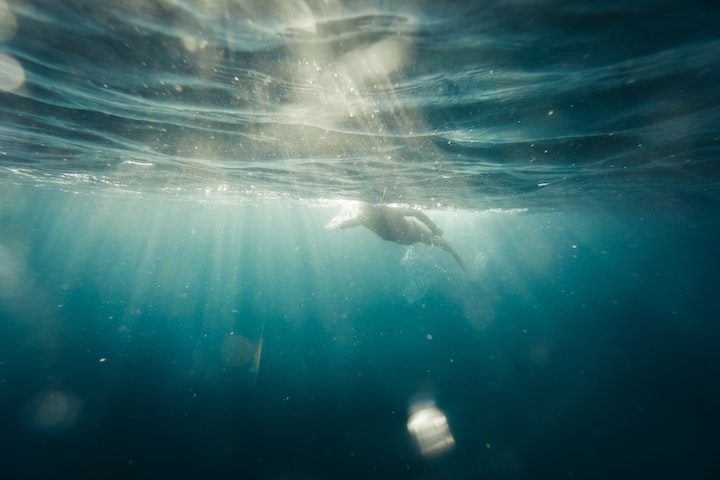 Photo by Silas Baisch on Unsplash

I’ve been bamboozled in a vocal media contest! Lured by fish captured in still, aquamarine image. White-fingered text taunting an invitation to wordsmith about aquariums. I slapped knee and hollered, “Hot damn! Finally, a contest fair for a science teacher.”

I’ve taught with aquariums. Atriums, too. I spoke the words, “This is water,” to roughly 1,784 advance placement students. I even required they thumb droplets of the stuff between thumb and pointer’s printed ridges.

This is Water. Finally, a chance to show vocal media my scientific knowledge.

But ho! I’ve been lit by gas! Here I was, poised eager to elucidate hydrogen to oxygen dichotomies, only to discover instead, I’d been hit with a graduation address. I researched your silly prompt. This is not the water I taught. It’s some kablooey default setting 'choose-your-own-reality' lecture served up by talking fish.

Listen here, audience. THIS is the Capital-T Truth. Fish don’t talk. And there's no way out of the reality of day-to-day grinding. Not for teachers. At least not this year. Again. But since vocal media calls for yet another fictitious romp between imaginary creatures, I composed a dialogue perched high above an indoor marine exhibit.

“What happens underneath the water’s surface?”

“Beyond the reflective ribbons made by schools of fish?”

"Can a bird catch a human?"

"Depends on the state of the carcass."

"They current throughout water."

"Some do. Not many." Both birds scan paved walkways. "None here."

"Have you ever caught a fish?"

"I touched a fish. Once. Overnight guards left behind a plastic bucket. I approached, curious, and peered in. Piled limp unpon each other, mouths slacked open, the fish appeared dull, darkened, bloated. I could only jab quick with a claw because the stench lifted my feathers. They appeared nothing like the fish in schools swimming behind glass windows."

"What happens to fish in buckets?"

"They're fed to the sharks and seals."

"But sharks are fish. Fish consume each other?"

"Yes. There is a natural order."

"Do humans consume each other?"

"Humans destroy each other. Within the species, too. Puzzling."

An eruptive chirp. “Do humans kill within their own schools?"

One bird gives a solemn nod. The other drops it’s bill.

"Why are there no whales within the pools or encasements?"

"Whales are too great to contain. They need deep, deep recesses to swim."

"Yes, but in a song far richer. Whales sing in harmony with the unknown. Understood only among their own families. No school is needed for whales. They're a separate being."

"Humans and fish are separated in the museum. In the open, is it the same?"

"No. Human, fish, birds alike, all intertwine ‘in the wild’, as they say."

"Do birds swim in the wild?"

“I'm befuddled, then. What is the difference between fish and human—in the wild—if both can swim?”

“Not sure. All I know—from this viewpoint—is fish float, belly-up, to the surface in the end. Humans sink to the bottom. Such is water, my friend.”

See what happens when you trick a scientist into entering a vocal media contest. The advert said, "Write about what takes place in an aquarium." It's not fair to tease with water, then drop a commencement speech about default settings. Yes, I entered the contest late. The reality is: I'm drowning. I'm a teacher. Now, allow me to bamboozle the audience.

Did I personify or symbolize?

More stories from Éan Bird and writers in Education and other communities.