A Bachelorette's Guide to Being a Successful Undergraduate

by Olivia L. Dobbs 2 years ago in college
Report Story

Five Crucial Mistakes I Made in College 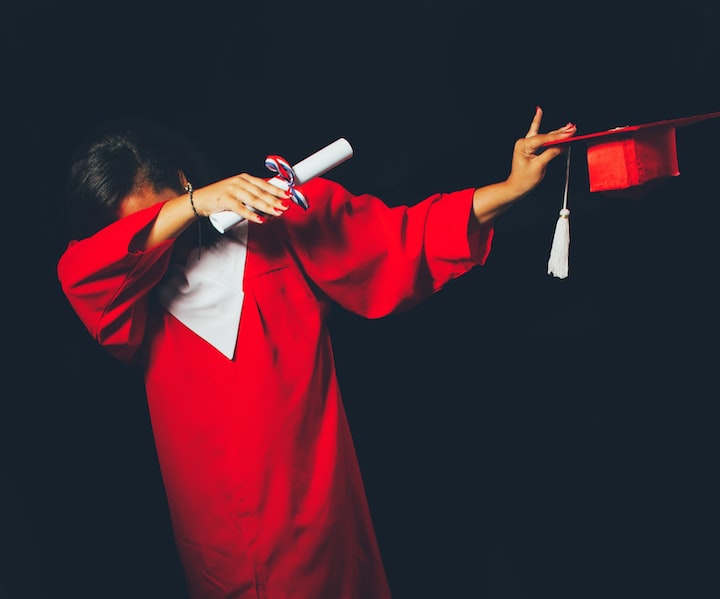 College is a frontier of possibilities, filled with an unending list of new challenges. It can be overwhelming at times but, with just a bit of prep, you can make it way easier on yourself. Take it from alumni who both triumphed and goofed it up a million times.

In a handful of ways, I royally bungled up my own college experience. Those years can be tough for anyone and everyone, but my greatest takeaway is that I made it so much more difficult than it ever needed to be. I made the mistakes and learned from them. I urge you to learn these lessons the easy way, from someone else’s mistakes:

1. Leaving the Financial Junk to My Parents

Financial aid applications are a mess. I remember glancing just once at the forms in my senior year and feeling stress wash over me. I felt too uninformed to even begin to understand what I was filling out. I begged and pleaded with my parents to get them to complete it for me. They told me that I’d need to figure it out on my own but, after days of pleading, they gave in and took care of it.

Shortly before my repayment period began, I realized all I did was postpone my own inevitable need to understand my loans. After graduation, it became my responsibility to repay them, determine whether or not to consolidate them, and budget them into my monthly expenses. I had to learn the entire process anyways on top of classes, midterms, and everything else in my tumultuous college years, instead of just getting it done with when I actually had time to.

I know it sucks. Just, for your own sake, bear with the initial process. Having a firm understanding of what debt you’re signing up for and how it works will make a world of difference in the long run. There’s plenty of resources out there nowadays, too! Watch tutorials, ask questions to people that have answers, and figure it out on your own. Your post-college self will be endlessly grateful to you.

2. Hopping Into a Four-year Without Feeling Ready to Commit

There’s this weird energy around the idea of heading to a four-year directly after high school. I subscribed to that energy fully and even felt that it carried a measure of worth with it. I thought that the “smart” kids were good enough to get directly into the “good” colleges and, without much of a solid plan, I applied to a myriad of different 4-year schools in hope that I could be seen as a “smart kid” too.

Truthfully, I was so hung up on being accepted into a four year, I didn’t once consider if my first major was one that I was passionate about. This was a massive mistake. College is difficult and, unless you are willing to pour your entire soul into your major, it’s tempting to give up. If you aren’t 100% in on your major, go to a community college first. It’ll give you more time to figure yourself out. Don’t follow in my footsteps, I ended up switching majors after my first year, pouring thousands of dollars into classes I didn’t end up needing.

A note on community colleges: they’re often way better than they get rep for. It’s a great way to get those nasty general-ed courses done, a way cheaper place to explore your interests, and one of the best ways to improve your chances of getting into your dream college. So, if for any reason you don’t feel like you’re ready to commit to four years yet, find a local community.

3. Moving in With My Partner Right Away

This one is probably my most embarrassing mistake. I was dating a guy when I graduated high school. We were both, and this is red flag #1, terrified that living away from each other would absolutely dismantle our already rocky relationship. Our relationship was not approved of by my parents (red flag #2), so our relationship became sort of an act of rebellion against my parents. “They can’t stop true love!” became a personal mantra. Our relationship took on a sort of Romeo & Juliet vibe (red flags #3 and #4). I of course conveniently forgot the end result of the play. When I moved out to go to college, he followed, and I happily scooted out of my dorm to sleep over at his place every night. What followed was an enormous amount of unnecessary stress.

Here’s the thing about living with a partner: it only gets fun when both of you know how to take care of yourselves. When both you and your lovely partner have only ever lived as children, that transition to adulting is rough. Is it doable? Sure, I survived. But I made my first year much harder than it ever needed to be. Instead of just figuring out college and adulting, which are both mountains to climb on their own, I was focusing on a relationship, figuring out domestic life, and trying to encourage a kid my age to grow up next to me. On top of all that, it made it so I didn’t have time to attend all the fun college events! After lost experiences and a boatload of stress, the relationship was rendered into a miserable pile of resentments.

So, if any part of this mentality resonates with you, maybe just visit them and video call often. If your relationship is meant to last, no distance will affect that. In college, you must be selfish to excel. Focus on your personal growth, your classes, and your well-being before anything else. A good partner will understand that, and encourage that you take time to grow.

Let’s be real here, the idea of finishing college in four years isn’t realistic for everyone. There are about a million reasons why your progress might be slower than you’d like it to be. The idea of a four-year college experience is designed based off of students that follow a detailed plan to the tee, full-time, and with zero mistakes. Sure, some people do it, but that simply isn’t for everyone!

When my progress towards my degree began to slow after I switched colleges, it hit me hard. A lot of my classes didn’t count at my new school, and I found out that I’d have to retake courses that I had already put the effort into passing. I spent a lot of time worrying that I wasn’t prepared for college and plainly wasn’t good enough to see it through since I was comparing myself to the four-year model students. My idea of a fluffy four years of study became a source of stress, an unobtainable finish line that was ever looming farther ahead of me.

My dear undergrad, or soon-to-be undergrad, throw the idea of a fluffy four years out your window right now. College is not, and has never been a race. It does not matter how long it takes, just keep going. You are not worse, less smart, or less capable if you are not able to perfectly fit into a schedule designed for the best-case scenario.

I get it. After on-campus meals, classes, and dorm-living, the view can get pretty stale. When I looked for a job, I didn’t even consider the offers on site. I figured that any break from college would be a breath of fresh air. I felt like my daily schedule had already dug a rut into the sidewalk, so I assumed that having a job literally anywhere else would solve the problem.

Here’s the thing: the jobs on campus are actually designed to be convenient. Not just are you already on location, but also the jobs are much better about understanding class schedules and study loads. Plus, some jobs even offer tuition aid, free food, or free housing!

Aside from the convenience and perks, those jobs and gigs are great opportunities to make friendly and even professional connections on campus. One of the best choices you can make in college is to put yourself in situations that help you network. A lot of people even go so far as to say that it is the best advantage you gain by attending college. If you have even an inkling of aspiration, working on campus is a great way to get ahead.

If you too find yourself digging ruts across campus, go on an adventure with friends, get a bite downtown, or satisfy that wanderlust in your free time. Don’t allow that scenery fatigue to affect your success!

Like what you read? Send me a tip below to help contribute to my next article!

More stories from Olivia L. Dobbs and writers in Education and other communities.