The World Is Burning and We're Sitting Back and Ignoring it

by Liam M 9 days ago in Climate

Mother nature is sick to death of us 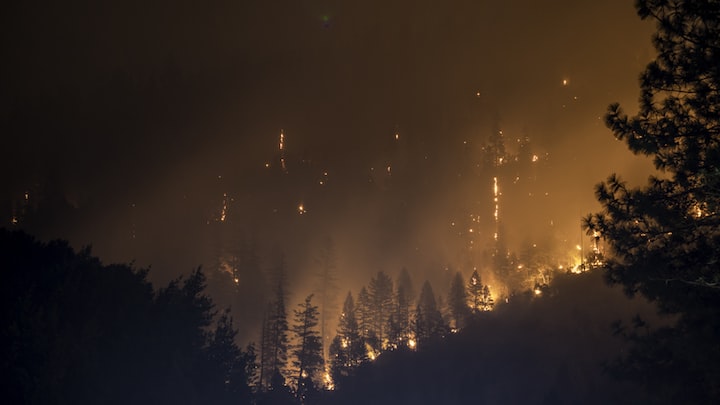 Photo by Matt Howard on Unsplash

Global warming is out of control. The world is burning in front of our eyes. And we're doing nothing about it.

Mother nature has had enough. She's tired of us using and abusing the planet. She's trying to kill all. I mean, earth would be better off without us.

We are reaching the point of no return.

The earth is heating up, meaning the natural ecosystem won't be able to regulate itself. When thousands of animals die due to temperature changes, there will be nothing to keep the natural cycle of life, especially human life. Fields will dry out, meaning farmers can't grow essential food to keep us alive. Floods and heat waves will cause humans to emigrate to safer places. Big moves will put strains on water and electric supplies. Humans will struggle to stay alive if we don't do something this second. This isn't a damn zombie apocalypse or a glorious Hollywood film. It's real life, and we're going to die.

But we won't do anything because humans are ignorant. We create apps and toys to keep us distracted. These distractions help keep us in a naive bubble of safety. We have become disconnected from reality. We are part of a machine that consumes and destroys everything in its path. We are the problem, and we're ignoring it.

In the process, we have generated chaos. Mother nature is going to destroy us if we don't act. We need to stop ignoring the problems in front of us. Our ignorance has led us down a dark, dark road of despair. Our world is coming to a rapid end. It's almost too late to turn back. Climate change has gone too far. In a very short time, the world will be mostly uninhabitable.

These weather events are happening in front of our eyes live daily. We can't ignore them anymore. We have front row seats for global destruction.

It is time to stop and listen to the experts. They have been warning us for decades now.

Why didn't we listen?

Because humans are inherently selfish, the issue isn't a problem unless it directly affects us. Until our cities are underwater, our friends and family are dead from a virus we could have stopped or when the food supply has been disrupted.

Only then we will take action. When this happens, we will stop looking at our phone screens and look up at the world melting and burning. Nothing can distract you when your children are starving and you have no more running water, a nightmare that may soon come true. It won't be like the films you've seen. It would be a living nightmare.

The warnings have been there for years. Everyone has heard of global warming, most have ignored the signs. We have been too selfish to acknowledge the changes. But now is the time to stop being so selfish. The world needs our help; future generations need us to make drastic changes.

Today, not next year, not even in 20 years. Right now, at this moment in time. Stop consuming and stop listening to the big corporations. They set fire to the fucking sea. Do you think they care about the world? It's all about money for them. Big companies pull the veil over our eyes, convincing us everything will be fine if we use paper straws or recycle our plastic bags. They tell us we can save the world if we donate and make changes. Rarely do they try to make changes to help? Billionaires are flying to space to enjoy mere minutes floating in penis-shaped rockets when they could be assisting people in surviving. They push the problem onto us.

But rather than making changes that could help change the world, we distract ourselves with social media. We scroll until our eyes bleed, distracting ourselves from the hellish reality we created. A reality that flames and ice will soon destroy if we don't make a change today.

Can we save the world?

Experts are unsure whether it's too late; unfortunately, it's not looking hopeful. We have an ever-growing population who abuse the planet via deforestation, farming and continuous use of fossil fuels. The EU has set a target to cut CO2 emissions by 55% by 2030. A great target if we were to aim a few years earlier, maybe 2025 or even earlier. If this year is anything to go by, we won't be alive by 2030 to reduce emissions.

By 2030 we may not have any more glaciers, the sea levels would have risen, and extreme weather events will happen daily. Then no one can deny what is happening to the planet.

According to NASA, even if we stopped today, global warming would continue to happen for at least several more decades or centuries. That's because it takes a while for the planet (for example, the oceans) to respond and because carbon dioxide - the predominant heat-trapping gas - lingers in the atmosphere for hundreds of years.

This may mean we're too late. The changes have already started accelerating; we saw it begin in 2020. Now every day on the news, there's another fantastic event happening. I'm afraid the goal of 2030 is not good enough. If governments aren't going to change, then it's up to us, the little people, to make changes.

Many people have said it before, but stop buying stuff you don't need: the new iPhone, the shoes, clothes, crappy plastic toys. Reduce travel and carbon emissions. Recycle where you can and avoid buying goods wrapped in plastic. Consume less meat. You've read this advice many times before, but today is the day to absorb the information and act.

The world is ending. Can we make a change and save it?

Brit living in Germany, living the sober life. Suicidal thoughts and organ failure brought me here, the lessons I learnt kept me here.

Writing about life, sobriety, money and all things inbetween

Receive stories by Liam M in your feed
Liam M
Read next: The Dandelion Seed