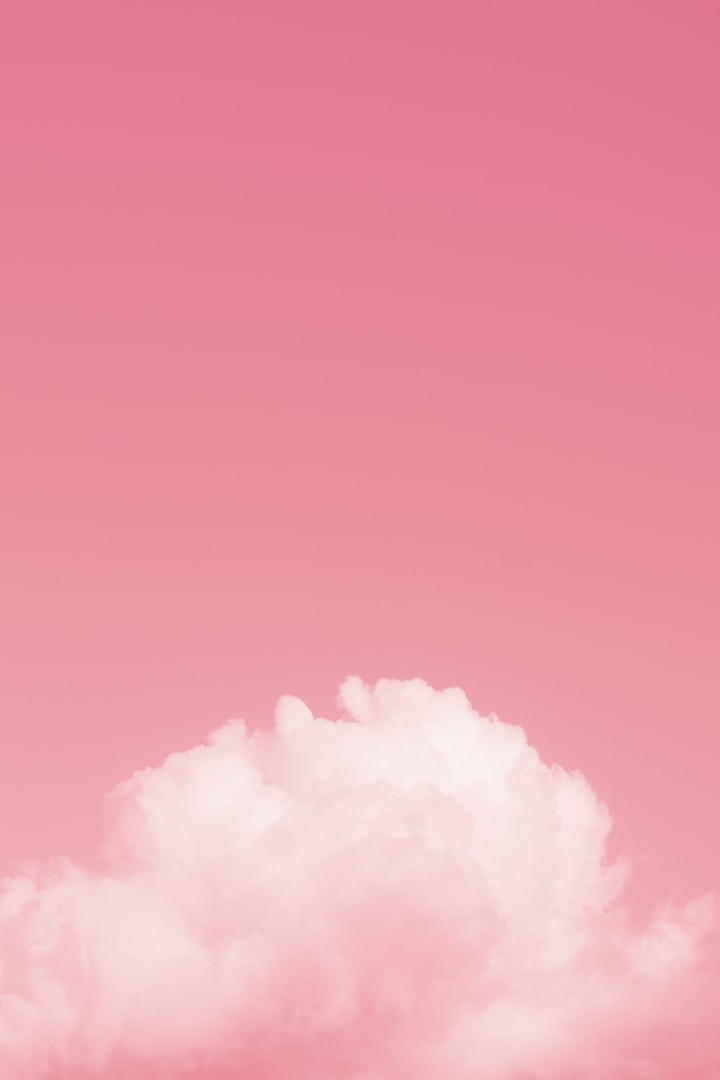 Photo by J Lee on Unsplash

Sarah woke up on a runaway train in space going nowhere. She was looking out the window of the train screaming for help as the train kept rolling away in space.

Sarah stared out the window of the train recalling yesterday of the weird purple, pink sky on planet earth.

Everyone came out of their homes staring above the hot pink sky. Sarah was coming out of her house when she noticed her neighbors staring upward. Sarah looked up and saw the strange colored sky.

“What’s going on?” Sarah asked no one in particular.

“We don’t know, there is nothing in the news about it.” Jake, the self-appointed spokesperson in the neighborhood answered.

Sarah got in her car in the driveway. She headed to her job while absentminded wondering about the sky. She parked her car at the underground parking of her work building and took the elevator to the 7th floor.

Everyone was just staring out the window, just mesmerized by the sky.

“What do you think is going to happen?” One of her co-workers asked while zipping his coffee.

“There has been a lot of weird weather phenomena going on lately and this sky is telling us what's about to happen.” Cathay, her work partner, speculated.

“Everyone gets back to work, someone turn on the news, please.” Sarah shouted in her manager's voice that she can muster.

Everyone got back to their individual cubicle. Someone turned on the 65-inch smart TV on the news channel. The newscaster started telling everyone that there is a state of Worldwide emergency, and everyone should go to the emergency shelters immediately. The address of the local Safety shelters was running on the bottom of the screen.

Sarah came out of her office and told everyone not to panic and to evacuate the building like they normally practice every month’s drill. She asked her best friend Cathay to come to her office for a minute before she went.

Everyone took their belongings and left immediately after Sarah's announcement.

It's not uncommon to have this kind of thing happen but this seems worse. The dreams she's been having lately are very strange, she thought.

“Do you have a minute, Cathay?” Sarah asked Cathay.

“Sure” Cathay answered while taking a seat on the chair in front of Sarah’s desk.

Cathay was always calm and did not seem to worry about anything, but she looked worried now.

She was holding tight to her seat and not smiling at all.

“I dreamt that a huge tornado came from out of space and took everything up into space last night.” she told her friend.

“That’s impossible !!!!” Cathay stood up in fear and disbelief.

“Sarah, I am already scared. Why tell me this?” Cathay asked wide eyed with fear.

“I just have a premonition that the world is going to change overnight and that everything will be alright. I just want to say I love you and you are the best friend anyone can ever have. I am going to take the train and check on my mother to see if she is safe. She does not want to leave her house for anything these days.” She told her friend with a hug.

“Give your mom a hug for me.” Cathay said in tears, hugging her friend goodbye, back.

Cathay left and Sarah closed the office. Sarah took the elevator down to her park car. Sarah kept trying to recall her weird dream but could not. She better hurry to her mother’s, which is an hour away by train.

Sarah got to the train station, but nobody was there but the conductor, “Where is everyone?”

“Everyone took the train before this one, I am going to the shelter after I put you on this train safely. Why did you not go to the shelter like the announcement said to do?” the conductor asked.

“I need to be with my mother. My mother will not leave her house. I am going to her now.” Sarah answered.

The conductor escorted Sarah to the train and showed her instructions to operate it in case of an emergency. The trains in 2040 were on autopilot completely. It was run solely on magnetic fields. It has been proven safe during harsh weather.

Sarah had a bad feeling about what she was doing but her mother was very important to her. She will risk her life for her mother.

Sarah was in her early thirties and never had a relationship. Sarah was a mama’s girl.

“Good luck, lady. I honestly would not go on this train by myself with what is going on right now.” the Conductor tried to warn her.

Sarah sat next to the train control station in case of an emergency. There were only three buttons to used. They were go, stop and open the doors buttons.

Sarah called her mother and told her she was on her way. Sarah’s mom's home has a safety bunker and that was where Sarah’s mom answered her phone from.

Ten minutes into the ride the wind started to blow from above like something was swooping from above and took the train into the sky. Sarah was in space screaming on the train in minutes.

Sarah had tried everything; her phone did not work from out of space. She had no idea what was happening on her planet earth. She knew she should have bought the latest phone technology. It was too expensive to buy techno gadgets. The 2022 inflation had affected the future economy badly.

Sarah fell asleep on the train and woke up on a pink planet. This looks like a new world that has not been discovered.

Sarah pressed the door button open. She seems to breathe ok on this planet. She stepped off the train and admired the beautiful pink new world she was in.

Welcome to the New World Frontier!!! I feel a Continuation of this story.

More stories from Mariann Carroll and writers in Earth and other communities.