by Lindsey Warden 24 days ago in Sustainability 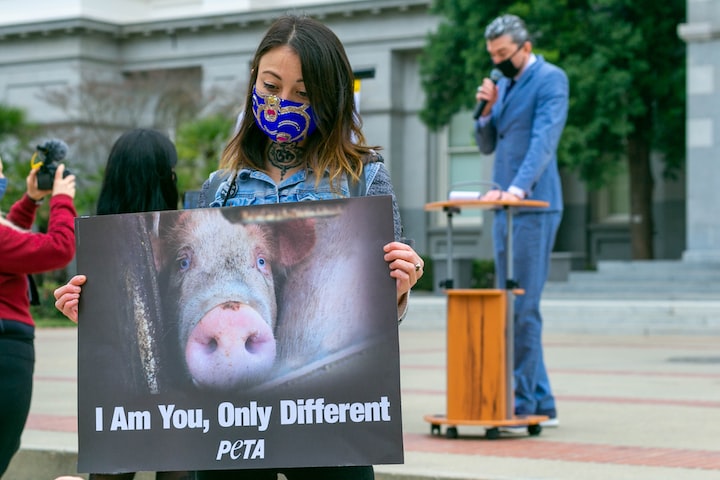 Photo by Jorge Maya on Unsplash

Stop eating meat and dairy: it's an unpopular directive. Browse any Facebook groups for five minutes and you're likely to come across multiple cringeworthy memes about veganism and vegetarianism. Where I come from in the southern region of the U.S., fried chicken and grilling out is a way of life. Only 14% of the world population identifies as vegan or vegetarian...and while that is up from other years, that means that 86% of the world population has likely grown up consuming animal products. And that's a hard habit to break.

How do you know someone's a vegan/vegetarian?

That's the punchline. People who reduce or eliminate their consumption of animal products are often loud and proud about it, but I think it's because so many of us are passionate about this lifestyle. I've been a vegetarian since 2013 - I was on a college debate team where most of the members were either vegetarian or vegan, and I slowly came to see and agree with their perspectives. I am a vegetarian primarily for ethical reasons - I would like to reduce animal suffering if I can. However, the more and more I have read about Earth's ongoing climate crisis, the more convinced I become that our current factory farming model is not only unsustainable, but one of the primary culprits of our planet's destruction.

The Problem With Factory Farming

Oxford Languages defines factory farming as "a system of rearing livestock using intensive methods, by which poultry, pigs, or cattle are confined indoors under strictly controlled conditions." Wikipedia, which refers to this same practice as intensive animal farming says it "is a type of intensive agriculture, specifically an approach to animal husbandry designed to maximize production, while minimizing costs." There is, of course, an argument to be made for the inhumane conditions in these kinds of facilities. Far from an idyllic pasture with cows roaming freely like we see in commercials, some factory-farmed animals never see the light of day. The conditions in these facilities, where 99% of U.S. farmed animals live, are grotesque. But outside of the ethical implications for factory farmed animals, what are the environmental and climate implications?

The entire process of factory farming contributes to vast environmental destruction and climate change. When forested land is cleared to make way for large-scale farming operations, key habitats are destroyed and oxygen producing plants and trees are destroyed. To date, "260 Million Acres (and counting) of US forests have been clear-cut to create land for producing feed for livestock" with 70% of the grain being produced in the U.S. going to the feeding of farm animals.

The biological waste from factory farming (think feces, blood, parts) also has to be disposed of somehow. A PBS article on this topic reveals:

The animals and their waste have fouled waters. The enclosures spew air pollutants that promote climate change and are implicated in illnesses such as asthma. The stench of manure — stored in pits beneath barns or open-air lagoons and eventually spread on croplands as fertilizer — can make life miserable for people nearby.

It goes on to explain that although agriculture is the biggest polluter of streams and waterways per the EPA, the industry's pollution is exempt from regulation under the 1972 Clean Water Act.

Most horrifyingly, factory farming is one of the biggest contributors of global carbon emissions. According to the Food and Agriculture Organization of the United Nations (FAO), the animal agriculture sector—which includes the production of feed crops, the manufacturing of fertilizer, and the shipment of meat, eggs, and milk—is responsible for 18% of all greenhouse gas emissions, measured in carbon-dioxide equivalent. Animal farming annually accounts for 9% of human-induced emissions of carbon dioxide (CO2), 37% of emissions of methane, which has more than 20 times the global warming potential of CO2, and 65% of emissions of nitrous oxide, which has nearly 300 times the global warming potential of CO2. To put it starkly into words, Greenpeace warns that "industrial livestock agriculture—raising cows, pigs and chickens—generates as much greenhouse gas emissions as all cars, trucks and automobiles combined."

These numbers are significant. A 2018 Intergovernmental Panel on Climate Change Report indicates that if we hope to limit rising global temperatures to only 1.5 C by 2100, we must cut net human carbon dioxide (CO2) emissions 45% by 2030, and cut to net zero emissions by 2050. It will be difficult, if not impossible, to do this without significantly decreasing our reliance on factory farming.

So how do we do it? Meat and dairy products are in extraordinarily high demand. These products taste good, and most of us have gone our entire lives eating these things. As a vegetarian/struggling vegan, I have found it hard to give up dairy myself, and that's as someone who knows the stakes.

While it's true that we could make a huge impact if we all just went vegan cold-turkey, I don't think that suggestion is very reasonable. Instead, I plan to leave you with three simple and doable tips to decrease your animal product consumption.

...and then extend your meatless days to two, three, or even four days a week. Meatless Monday is an awesome way to dip your toes into vegan/vegetarianism without going full throttle right away. When I first became a vegetarian, I tapered off slowly into a veggie-based lifestyle. I quickly discovered that I enjoyed discovering new recipes and eating this way.

Cutting meat out of your diet a few or several days a week is not only a great way to help the environment and slowly move towards a more planet-friendly diet, but it's also great for your health! It significantly cuts your risk of heart disease for one, and is widely considered more nutritious than a diet heavy in meats (especially red meats).

Here are some of my favorite vegan/vegetarian recipes to get you started!

This concept usually gets some pushback from diehard meat eaters. There is a big misconception that meat and cheese alternatives are "not real food" or that they don't taste good. I have found this to be largely untrue, and I say that as someone who is super picky about my food. It's been almost ten years since I became a vegetarian, and I have noticed an explosion in the market of delicious alternatives for whenever I get the craving for a burger or a similar item.

As we grow older, we do tend to get more stuck in our ways about our likes and dislikes. I think the old adage about trying new things rings true: if you never try, you'll never know! Here are some of my favorite meat alternatives that you should try ASAP...they're delicious and totally humane!

If all of the facts and ideas I've outlined here have you feeling really inspired to pursue a plant-based diet sooner rather than later, there are lots of online resources to help you quickly jump into this new lifestyle with meal plans, recipes, and expert advice. PETA and Veggies Don't Bite both have amazing, simple meal plans with grocery lists that anyone can quickly follow. I have tried some of these before, and they have all been delicious! For the budget conscious, Plant Based on a Budget also has a one week meal plan that looks great. Following a meal plan is a great and low-stakes way to see if a plant-based lifestyle is something that you could sustain for the long-term...and if even if jumping directly into veganism seems too challenging at first, designating even one or two weeks a month to go meat free drastically reduces your environmental impact.

For those who are considering making the jump to veganism, as I am, there are a variety of support groups on social media that share recipes, meal plans, tips, and advice. New Vegan Support is a large and fabulous Facebook community, but you can also find vegan groups dedicated to your immediate city, state, or country, and even vegan groups that trade recipes for specific cultural cuisines.

Jumping into vegetarianism or veganism after a lifetime of eating meat can be tough. It's hard to retrain your mind, and the cravings for meat in the first month especially are tough. But I believe this kind of diet and lifestyle are incredibly important to supporting our environment and planet, and to divesting our dollars from inhumane and destructive factory farms.

I'm not saying everyone should cut meat out of their diet right away and completely. If that's something you choose to do and can do, that's wonderful. But in the meantime, I hope that my tips and ideas will help you decrease your animal consumption and slowly but steadily move towards sustainable eating and an environmentally friendly lifestyle! Our planet can't wait, and reducing your meat consumption is one of the healthiest, cheapest, and sustainable ways to be the difference.

Appreciate my thoughts? Leave me a heart or a tip, or follow me on Twitter @arkansas_scrawl. I write about all sorts of things that interest me!

I am a mother, writer, and teacher. I write about things that interest me, and I'm committed to entering EVERY Vocal contest and publishing writing EVERY day. I plan to jump wildly from niche to niche as I think, write, create and explore.

See all posts by Lindsey Warden →