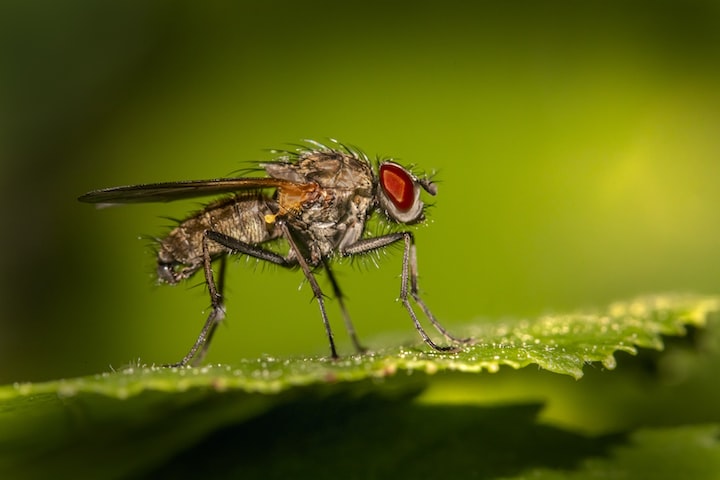 On the bank of the stream, there is a big tree, next to the tree there is a red flower, under the flower, there are several turquoise leaves, a leaf with a small worm on it.

The little worm was sleeping on the leaf when the sound of "knock knock knock" came. The leaf shook (yáo huànɡ) and the little worm hurriedly grabbed the leaf. It turned out to be an elephant running this way. It was thirsty and came to the stream, stuck its long trunk into the stream, sucked some water, and sprayed it on its body to take a bath.

The little worm saw it and thought enviously: "It would be good if I could have a long trunk like the elephant. So that I can take a bath every day with a long trunk."

The elephant finished taking a bath and left. Not long after, a giraffe came along. It bent its neck, drank some water in the stream, and then stretched its neck to eat the leaves on the big tree.

"Giraffes have such long necks. If I had a neck like that, I would eat fresh leaves from the trees and I would whisper to the white clouds in the sky." The little worm imagined itself one day with a long neck ...... thinking about it, and it fell asleep.

The wind blew gently, the leaves swayed a few times, the little worm did not notice at all, it slept too well.

Night, quietly fell. The night fairy, carrying a lantern, lit up a star in the sky.

The stars kept blinking their eyes, blinking and blinking. One star suddenly said, "Look at that leaf." Oh, the little worm was gone. There was only a small ball on the leaf that looked like it was wrapped in silk (ɡuǒ).

Suddenly, there was another gust of wind, and the butterfly didn't stand still and fell off the leaf in one fell swoop. It screamed as it fell downward. Just at the moment, it was about to fall into the water, it suddenly fluttered its wings and flew up: "Ah, so I have become a butterfly, I can fly."

The butterfly flew round and round the flowers, and when the little fish in the stream saw it, they said enviously, "It's good that I can fly."

The butterfly fluttered its wings and flew past the elephant that was eating grass.

The elephant saw the butterfly and said enviously, "If only I could be like you, small and light and able to fly, how wonderful it would be. That way, I could go far, far away."

The butterfly fluttered its wings and flew past the giraffe who was running.

The giraffe saw the butterfly and said enviously, "If I could fly in the sky like you, how wonderful it would be. Then I would never have to be afraid of lions again."

The butterfly thought to itself, "So, there are so many people who envy me."

The Green Bamboo and the Little Tree

The bamboo shoot answered the little tree's question despite its displeasure: "Like you, it grew out of the ground."

The little tree was upset: "How can you compare with me? I am here on high, and you are just on par with the grass around you."

The bamboo shoot said kindly to the tree, "Don't look at me now, I am very small, but in a short time I will be able to catch up with you."

The tree was even more upset: "What? What? You can grow as tall as me? That's so insubordinate."

The bamboo shoot also did not show weakness: "I can not only grow as tall as you, and soon will exceed you!"

The tree was so surprised that he was dumbfounded, he had measured the small bamboo with his arm, and it had grown a meter taller overnight. This forced Little Tree to look at the green bamboo with astonishment. "Little old brother, no, little brother, grow so fast, it's amazing! Did the God of Heaven cast some magic on you?"

Qingzhu laughed out loud with a bright smile, "There is no one casting any magic, the cell growth of our Bamboo family is just so fast, we can produce 90,000 cells every second, plus our special growth method, can't we grow fast?"

Little Tree was eager to know the secret of the fast growth of Green Bamboo: "What is your special way of growth?"

The little tree was so convinced that he gave a military salute to the bamboo, which was much taller than him, and from then on he politely called him Brother Bamboo.

More stories from Eartha J Adams and writers in Earth and other communities.