by Yess Bryce 5 months ago in short story
Report Story

Is easier said than done... 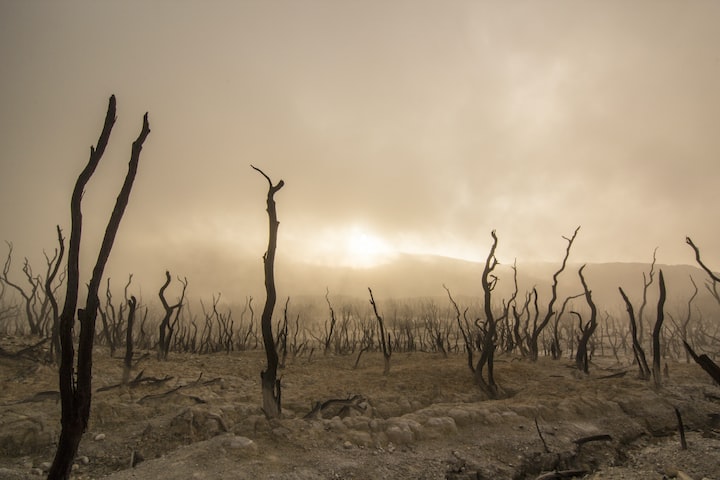 Photo by Dikaseva on Unsplash

There weren't any keys left to return. None of the doors locked, and only one of them could actually latch closed. The propane tank had never been filled, and the water had frozen solid last month.

It was minus 16 degrees that December, colder than usual. No snow had fallen, it had just gotten cold, and fast. Everything looked barren and brown, with that glint things get when they might break from freezing. It gives the filth a bit of shine. Life in a town this forgotten is a quiet sort of pain.

She smiled at the frozen orchard, the trees and their branches looking as forlorn as she felt. Wandering to her broken down greenhouse, she sidestepped the pieces of her lost life, like puddles of ice. The barn with its empty table, and the art stacked by the door, ready for the moving truck.

The greenhouse sat empty, cords and lumber, fans and irrigation, all a jumbled mess. No plants or signs of life, no seeds or pots or lighting. She sighed, her heart wrenching in her chest. Another quiet sort of pain, she noticed. How much it hurt to lose her farm, was nothing she ever expected.

And yet, she would close the gate behind her today. She would hang the chain up, and clasp the padlock. She would drive away, with nothing but her pets and her life. Lucky, she thought, that she could get away with that much.

One more trip through the house, to make sure she had cleared out what mattered to her. It wouldn't matter to anyone else, this she knew.

Staring across the field at her neighbours house, she was grateful for them. They had come to her rescue when the world had collapsed on her life. They were another reason she would miss this place. But they make telephones for just this reason. She made a mental note to save their number forever, and call them when she could.

The day was leaving, the darkness of an early winter evening fast approaching. She didn't want to make the drive in pitch black, so she picked up her step and hurried across the empty driveway.

Looking down the long gravel pathway, she could suddenly see a silhouette of a man. Stopping in her tracks, her heart leaped into her throat with fear. This was what she was afraid of. Just let her leave peacefully, she begged in her mind. Please, I just want to leave.

He had a rifle at his side, and a dog at the other. The pandemic had shown the world how desperate times make for desperate people. Her lover had attacked her, and her business partner had betrayed her. The property owner had tricked her, and now he stood there, foreboding and evil.

He had turned off the power, and left her in the cold, hoping she would leave sooner than later. He had kept her down-payment and sent the hounds in after her chickens. Looking around at possible escape routes, she was trapped. The only way out, was blocked by the man in carharts.

This was it, she knew. All her efforts to escape and start over somewhere safe, were to no avail. She could scream for help, but no one would come. The friendly neighbour across the field was gone for the holidays. She was alone, in a dangerous country side.

Turning to face the back of the acreage, she laughed. The landowner had told her a tale once, when she used to believe he was kind. He had said there was a burial ground of Native Americans in the back forty. She knew she would join them now. Running across the hard ground, she heard the jangle of the dogs collar, getting closer and closer. It would bite her ankle any minute.

The boom of the rifle rang out, and she fell. Arms wide, hugging the frozen dirt. Her chin hit the gravel and split open, as her back poured blood. She hadn't left soon enough, and now, she never would. The last thing she saw, as her life drained away, was the pond full of ice. Where she would spend eternity. A quiet sort of pain. The land had known she belonged there, after all.

More stories from Yess Bryce and writers in Earth and other communities.