How were Himalayas formed?

by Dipan Pathak 6 months ago in Nature
Report Story 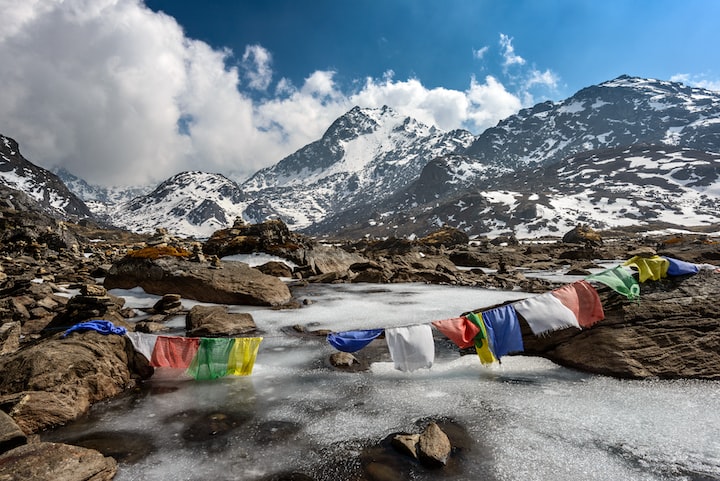 Photo by Sergey Pesterev on Unsplash

The continuous growth of the Himalayan mountains is due to the Indian tectonic plate moving northward. As these mountains continue to grow and erode at the same time, the net is expected to continue to grow because the Indian plate does not look like it will move anytime soon. The Himalayan region continues to be hit by earthquakes today, and the fact is that the movement of plate tectonics continues, pushing India further north.

Geologists believe the Himalayas have formed about 55 million years ago after a single continental collision in which Neotethys - A plateau on the southern tip of Eurasia sank and collided with Indian and Eurasia tectonic plates. Towards the end of the Cretaceous (84 Ma) the Indian plate began its rapid northern flow covering a distance of about 6,000 miles, as oceanic-oceanic transport continued until the final closure of sea vessels and oceanic ophiolite corpses under the plate initially. of tectonic interactions between continents and continents, from the Central Himalayas about 65 Ma. Nearly 50 million years later, India's speed dropped and shifted north, which many scientists interpret as the first phase of the plate collision with Eurasia.

The sides of the continent plowed with each other with sufficient force to lift the huge Himalayan mountain range As the ocean layer disappears into the mantle, tectonic plates are formed on the surface of the earth and travel at a speed of a few inches per year. . As a result, the force of the tectonic plate operates in a complex area that dominates parts of the Asian continent and the Pacific Ocean. Recent research on ancient magnetic patterns on rocks has allowed researchers to map the continents over time and based on these data has shown that mountains formed a clash that occurred between India and Eurasia 55 million years ago.

The collision of the two major continents of India and Eurasia led to the plateau, which began with the construction of huge mountains 40 to 50 million years ago. As the continents pressured, the Indian continental plate bordered the Asian plateau, coagulating the ice and forming what would later form the massive Himalayan range. As soon as the collision took place, tectonic plates caused the transition of the Eurasian-Indian plate to the plateau as it congested and formed huge mountains, absorbing fragments of seawater from the Tethys Sea, which separated the two continents from the highest peaks.

The effect of the ram led to the beginning of the Himalayan peaks when part of India fell under the plateau of Eurasia. Despite the same rock density, the plates of one continent could not penetrate the plate of another continent, so the force of the plates released the force that distorted the plateau and created the mountain range. The tectonic cracks of the Indian and Eurasian tectonic plates over millions of years have shrunk and lifted the mountains of the 15,000-mile-long series known as the Himalayas.

The Himalayas are the result of continuous orogenesis, the collision of continental crusts of two tectonic plates, and the Indian plate being pushed across the Eurasian plate. It is still a mystery what steps the tectonic dispersion between Indian and Eurasian tectonic plates took tens of millions of years ago and whether they continue to this day as part of the transformation of Mount Everest.

The tectonic plate of the Lesser Himalayas (LH) was formed during the Upper Proterozoic and Lower Cambrian periods, when dangerous sediments did not change near the Indian Ocean mixed with granite and acidic volcano (1840-70 Ma). Most of the thick sand along the shoreline came from the seas that formed the Himalayas.

Hundreds of 1-inch-wide rock samples were formed when volcanoes erupted 66 to 61 million years ago when the first phase of the collision began. The first model of a single Himalayan volcanic eruption predicted that a whole series of samples would form in Eurasia with a latitude of about 20 degrees, but our data show that they did not form Indian or Eurasia continents. Although the first single-stage collision model predicts that the rocks would form in the Eurasian range of about 20 degrees, our data show that they did not originate in the Indian, Eurasian, or both continents.

Huang was able to confirm that the Tethyan and Himalayan blocks were part of the Indian Plate at the time of the Asian collision and that they were separated from the Indian subcontinent by a large seafront that formed 116 to 68 million years ago. The timeline corresponds to the well-known Indian region after 71 Ma, but not during the Eurasian-Indian plateau conflict, which began about 50 Ma earlier. The same paleolatitudes are measured at the same age in rock samples from Indian and Asian plates that indicate the time of the collision.

The narrow, winding structure of the Himalayan mountains, which marks the boundary between the two tectonic plates and is connected to the ancient sea, has disappeared. These effects change the scientific models of the mountain years and the speed and angle at which the Indian plates continue to collide with Asian plates and pervert the Himalayas.

More stories from Dipan Pathak and writers in Earth and other communities.