Deep Dive: The Last One

An exploration of a futuristic world where life is lived underwater and a new aquatic human species has emerged. 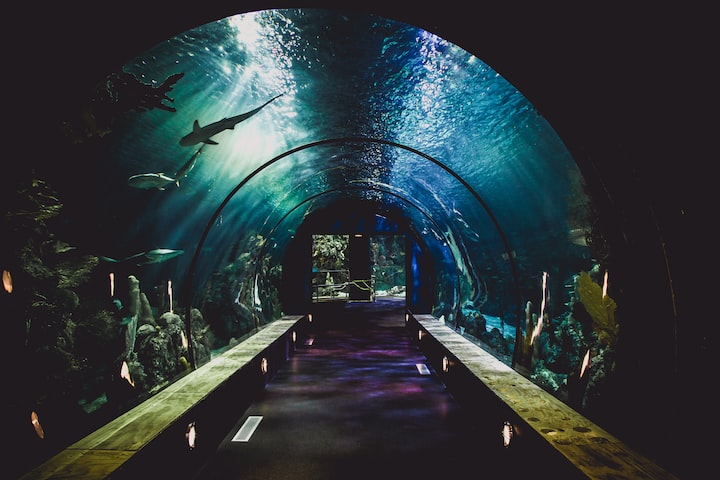 Photo by Felipe Galvan on Unsplash

10th Grade Historical Report: The Dawn of the Aquatic Age

Submerged under water the aquami people grew accustomed to their new underwater lives in the year c. 4020. They lived in their own submarine homes with their families. Over time they developed mutations that allowed them to bring forth a new human species that was capable of surviving underwater. They were called homo aquamanti otherwise known as aquami. They were able to develop intricate systems of communication through the water. To travel between underwater countries there were above-level ports where they could catch a water plane for short trips or boats for elongated ones. They built skyscrapers made of a special kind of synthetic non-corrosive metal that was anchored into the most shallow parts of the Earth’s ocean, which had previously been known as deserts to the human species before. These were dry, hot, arid areas with little to no water. The cities were built in the ocean with their bottom floors submerged below sea level. As you go up the buildings, past the tenth floor, it is completely dry as it is the first floor completely above sea level. That’s where the most wealthy, powerful homo aquamantis live and work. It is also where most governments position themselves in specially marked buildings.

Aquami all wore special swimsuits to get around. In some underwater countries, education was delivered via computers individually to students where each student had a one-on-one tutor. However, in other countries, aquami offspring were not raised by their parents but by well-trained, qualified carers. In these countries, there were two pathways in which they could have children. Parents either needed to undergo a 3- year training course or they were to donate a zygote (or one set of the two main ingredients) to an academic institution where they would be raised until the age of 16. Young aquami could choose to stay at the academy if they wished until the age of 18 and they do get to build a relationship with their parents via the internet guided by a specialized program supported by the carers. Students are streamed into different career pathways according to their strengths.

Marine life dramatically changed since the dawn of this new human species and this drastically affected the ecosystem. Before their lands were completely covered by seawater, they harvested and preserved as much food as possible. As those foods began to depreciate they began depending on the nutrition supplied by the ocean. Beyond fish and large sea animals being consumed, they also began consuming other sea plants and ocean flora to sustain and provide them with minerals and vitamins. Many aquami also live off crustaceans and there is a huge industry dedicated to farming them. What also became a large staple due to their greater abundance and demand was plankton and algae. Large sea animals such as whales and sharks became extinct, with perhaps some rare species assumed to still be swimming around in the deep dark sections of the world’s oceans. Dolphins were still alive, however. Dolphins were honored and worshipped as God’s creatures and so were off-limits to sea farmers. Sea turtles were often kept as pets and were also rarely eaten out of respect.

The anatomy and physiology of the aquami people evolved somewhat from the previous human species. They developed scales on the backs, sides, and shoulders, and they developed webbed hands and feet, although still maintaining elongated fingers and nails. Their eyeballs had grown larger with totally dilated pupils to see better through the water with an extra layer covering them to protect their eyes from salt. Speaking of salt, many land-human species that had lived near the dead sea didn’t survive due to the amount of salt. A boundary was installed around this area so that no one would endure the same fate.

Our generations of aquami people need to acknowledge and remember the sacrifices and experiences that the previous human species had to endure, in order for our human species to emerge. Without the human species gone before, we would not have the technology, information, and infrastructure to live as we do today in 7021.

Elonia finished her report and submitted it to her tutor, Amalia Kines. She had been awake for 36 hours, which was standard for most aquami people. Unlike the human species before them, they could survive on more than 36hours of being awake. They would normally sleep in a tubed bed for 12 hours. A week consists of 10 such 36-hour days. A year consists of 9 months and 36 weeks. Between each year, there is a 5 day week where no one sleeps and is dedicated to celebrating and preparing for the new year.

Fifteen minutes after Elonia had submitted her report, her tutor, Amalia Kines called via the computer. Feeling anxious to receive her feedback, she signaled the computer with her voice to answer the call. A woman with long red hair, a thin bony face, and large black eyes appeared on the web camera.

“Hello, Elonia, how are you today?” announce Ms. Kines.

“Well, despite the late submission, overall your report is generally good with some room for improvement. You also left out a section - about how previous human species organized their yearly calendar,” explained Ms. Kines.

“How have you been sleeping lately, Elonia?” asked Ms. Kines, with a kind, even voice.

“I slept about 36 hours ago. But I’ve been feeling really unusually tired today. It must be all the research I’ve been doing,” she suggested.

“What was the quality of your sleep like? Did you have any dreams or were you particularly stressed before you went to sleep?” postulated Ms. Kines.

“Um, I went to sleep pretty ordinarily. However, I do remember a recurring dream I have been having regarding a shark…” replied Elonia.

“It was just swimming in the ocean, and then it was trapped behind a clear glass wall. I think I could feel its anxiety,” explained Elonia. "At the start I was observing the shark, but as it came closer to the glass, I switched perspectives and started seeing things as though I was the shark."

“Hmm, that’s interesting. Often our dreams represent something deeper going on inside us. Can you connect it to something meaningful in your life?” pondered Ms. Kines.

"Not particularly...perhaps I feel like I’m stuck or something...but I don’t know…” replied Elonia.

“Have you ever been to the Marine Museum above sea level?” asked Ms. Kines?

“Yes, but I have never been. I’ve heard that they have fossils of ancient animals and organisms,” replied Elonia.

“Well how about we organize an educational excursion?” suggested Ms. Kines.

“That sounds exciting, but why?”

“I think it will help. I will send a shuttle to your house with the GPS alread set to the museum. It should be there in 12 hours and I will send a note for your parents. Try to get some sleep. See you tomorrow.” Ms. Kines then hung up.

Ten minutes later, there was an alert. From the window, she could see the black shuttle parked on the landing port connecting the internal section of the submarine automobile to that of the house, so that it wouldn’t fill with water. Elonia took the tunnel and entered the sea-automobile from its floor opening and sat on the seat, holding on to a handle in front of it. As soon as she was seated, the submarine zoomed through the sea streets and got onto a speedy tube highway towards the Marine Museum. As she came closer to her destination, she felt the vehicle slow down and stop at the front entrance.

The shuttle parked on a landing connecting it to the ocean around her via a tunnel. As she came out of the tunnel, she saw her teacher waiting at the entrance, wearing her navy blue full-body swimsuit and her long red hair flowing behind her bound in a ponytail.

They swam up a spiral swim-way, up to the 10th floor. They stood in the drying area for 10 minutes before taking the lift to the top suite.

“What is this place?”

“Elonia, prepare your eyes for what you are about to see,” said Ms. Kines, sensing the rising anticipation in Elonia’s breathing.

When the lift doors opened, Elonia was astonished by the glass tanks on the ceiling and walls surrounding her, filled with ancient sea creatures and lit with beautiful neon lights to enhance the exhibition.

“Wow, it’s amazing! How did they - I thought these creatures were extinct…”

“Well, as you wrote in your paper, scientists did speculate there were still some sharks and larger marine mammals hidden in the darker waters of the Earth. But these particular creatures are the result of many millennia of conservation. This museum has been conserving these species for millennia,” explained Ms. Kines.

“Wow, so then, this is a good thing that they’re contained in these large glass tanks…” suggested Elonia.

“Of course!” said a more masculine voice. Just then the glass changed as it turned into a huge projector screen, showing a male’s face. He was bald and wearing glasses, and he looked somewhat different to typical aquami people.

“Who are you?” Elonia curiously asked.

“Thank you, Amalia. Good to see you again too. I notice your student is looking at me quite perplexed by my unusual features.” replied Jonathon cackled.

Amalia laughed, “yes, this is the first time she has ever seen someone like you in real life.”

Elonia was speechless and had her eyes fixated on Dr. Atario’s face. “Elonia,” initiated Amalia, “marine life is not the only ancient species that have been conserved up here. Jonathan is a homo sapiens, a land human.”

“Thank you, Elonia. What brings you here today?” asked the doctor.

“Elonia has been having shark dreams,” explained Ms. Kines.

“Ah, another one. Seems the pull of the ancient world is quite strong on the young aquami of today,” commented Jonothan.

“Yes, indeed, Jonathan. I thought it might help her to visit one. She said she could feel the shark’s fear in her dreams,” explained Amalia.

“Well, young Elonia, feel free to wander around. And, don’t worry, they are treated with respect here. If it weren’t for our role in containing them, they probably would have become extinct long ago, “ explained Dr. Atario.

The screen switched off and once again she could see through the glass, the sharks swimming. She gazed at one shark that had a strange-looking head. It was long and resembled a T. “That one is called a hammerhead,” chimed Amalia.

“Oh, the one in my dream was white and large,” replied Elonia.

“You mean like that one, in that tank over there?” she pointed to an isolated cylindrical tank across from them on her left.

Elonia saw it and started moving towards it. “Yeah, like that one…”

She pressed her hand on the glass, and the shark came up to her. She sensed sadness in its eyes. On the plaque next to the tank, it said “The Great White Shark: the most feared by humans. The most misunderstood.”

“I think I understand what my dream is trying to tell me now,” explained Elonia to Ms. Kines.

“I’ve been feeling misunderstood lately. Every time I try to explain myself to others I just feel like they misinterpret everything I say. I feel like I’m speaking a different language, no one understands,” explained Elonia.

“Hmm, that’s very deep and insightful,” said Ms. Kines in admiration. “Despite how much we have evolved, some things still remain consistent. Every human being that has existed has felt exactly like that. This shark is the only one left of her species. That’s why she is so protected here,” explained Ms. Kines.

Read next: Venison — The Stuff of Life