Why Maradona Is God , And Messi Isn't

Maradona was everything but an easy character, but the sports legend represents so much more for Argentinians. 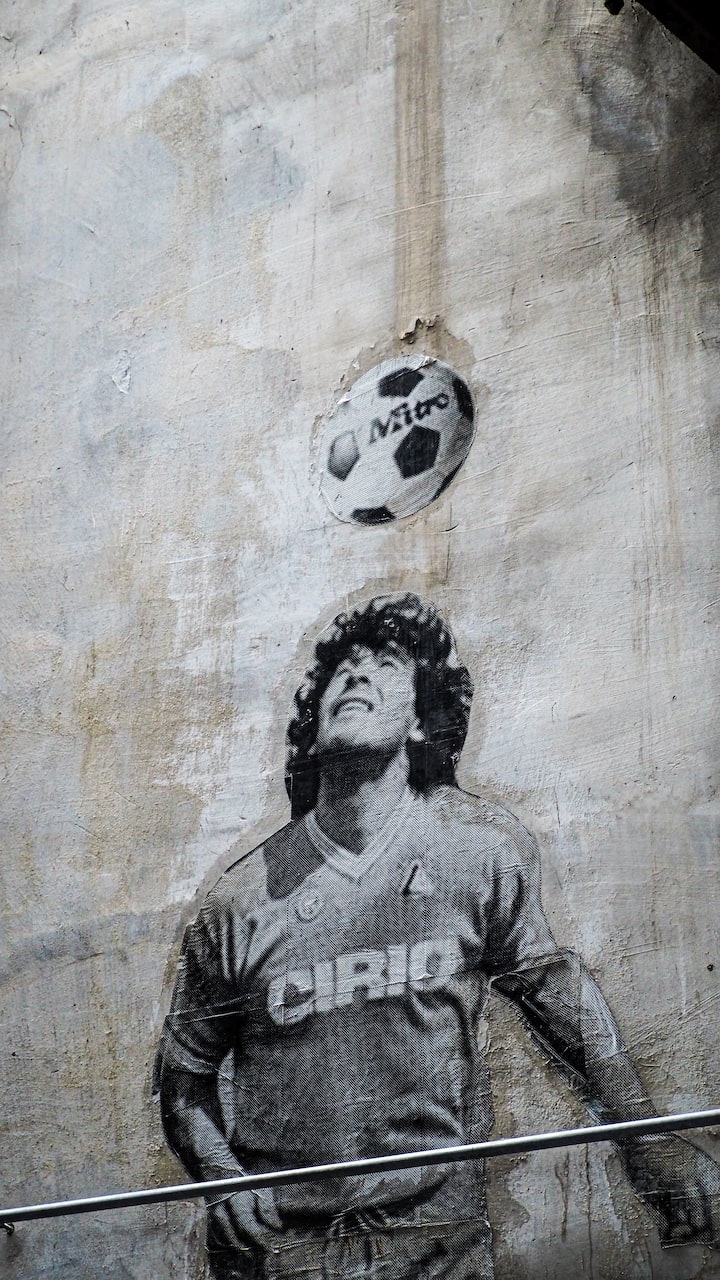 Photo by Jack Hunter on Unsplash

Somewhere around 2013, I was at the gym, finishing my workout on the treadmill, when I glanced at the door and saw a short, chubby man walk in the door, followed by a bleach-blond woman 30 years younger and a personal trainer three times his size. His attitude was that of someone who owned not just the gym, but the whole city.

It took me a couple of seconds to understand this tiny man with a potbelly walking around the gym in his tracksuit was El Diego. Diego Armando Maradona, one of the undeniably best football players of all time, alongside Brazil's Pelé.

I saw Maradona a couple more times in those days, before he got a job coaching a team in Dubai. He was still doing okay, sort of, although he did look physically much older than most men his age, only 50 at the time.

Remembering the moment later, I couldn't get over one thing: How could a mythical creature like that be so tiny?

Even I, a person born and raised in Finland who had never been interested in football, understood the importance of this character, and the strangeness of stumbling into a situation where I shared the same air with him. Sometimes, a celebrity's fame is so far-reaching you don't understand how he could cohabit the same space as you do.

A Beloved and Troubled God

"A beloved child has many names," says an old proverb of the country I was born in, Finland.

Diego Armando Maradona, the hero of my chosen country, is the perfect example of how well this saying holds true. Of how, the more of their love, hopes and dreams people place on you, the more titles you will receive.

El Pelusa, the Lint, in reference to his unruly hair and the short stature that gave him an advantage maneuvering in the field.

El Pibe de Oro, the Golden Kid, for when he was just a child from a rough neighborhood in the outskirts of Buenos Aires.

El Barrilete Cósmico, the Cosmic Kite, a name he earned in the 1986 World Cup quarter-finals for the Goal of the Century.

And then, there are the more common names for the person who was larger than life.

El Diego, The Diego, the one and only.

El Diez, the number 10, refers to his playing position and the number on his shirt. There's always a number ten in a football team, but Diego is the one. So much so, that his name is a synonym with the number in Argentinian slang. You can use it to refer to a ten-peso bill, for example.

Because Maradona, to many Argentinians, is a god.

Last Thursday, November 25th, while people in the US gathered with their families around a dinner table to give thanks, Argentinians mourned the one-year anniversary of the death of their god.

The investigation into Maradona's last days and the responsibilities of his closest advisors and doctors is still open, but some of those people will likely end up in jail. It does seem he wasn't doing fine in the days leading up to his death, and those around him didn't care for him as they should have.

On the other hand, Maradona was an addict, a person who had put his body through an incredible amount of stress, and who had been close to dying before. His death, while much too young, wasn't all that surprising.

But it was still a major shock, especially in the middle of the pandemic and a major economic crisis, because Maradona's meaning to Argentinians went so much further than football.

The Legend of Maradona

Maradona wasn't just the best player of his time. He rose to fame at an incredibly important and turbulent time in Argentinian history.

He wasn't able to play with the Argentinian national team in the World Cup of Buenos Aires in 1978, as he was only 17 at the time and the head coach decided to leave him out of the team. While Argentina did win those games, the memory is shadowed by the atrocious human rights violations the ruling military Junta had orchestrated since taking power by coup 1976. The World Cup was a major face-cleaning effort by the Junta that was trying to deny the forced disappearance of thousands of people denounced by human rights organizations.

The 1982 World Cup began at the same time as Argentina was losing a war against the United Kingdom over a small group of islands in the southern Atlantic Ocean. The Malvinas War (the English name 'Falklands' is unacceptable in Argentina) had been the military Junta's last, desperate attempt to avoid collapse, but by June the humiliation was clear, just like the fact that a regime change was on the way. The society was tired, the economy was in shambles, and the brutality of the Junta was becoming clearer by the day. Argentina was also not able to find success on the field, and everyone from Maradona to the viewers was disappointed.

Four years later, things had changed. Democracy had arrived, and while things were certainly not easier, there was freedom, and hope. But most importantly, there was payback.

The defining moment of the 1986 World Cup for Argentinians was the quarter-finals game against England. Maradona scored two historic goals, one called the 'Hand of God', the other the 'Goal of the Century'. Every football fan in the world has heard of these two goals and most likely seen them, but it's always worth rewatching the latter.

It's just beautiful. If you look at the poetry of this play against the backdrop of Argentina's history, you'll understand why it's so important for Maradona to have left behind one Englishman after another and put his country in a 2–0 lead.

The Hand of God should have been disallowed because Maradona used his hand, but the referees missed it at the time and the goal stood. But far from being shameful, Argentinians remember that very game with incredible pride. It was revenge from a nation that had long been pushed down by the powerful. Maradona, the tiny man who was able to pass English defense on his own and deliver victory to his country, was a middle finger to imperialism and oppression. He represented defiance, a football F.U. from a country that had just stumbled out of decades of military dictatorships—often supported by powerful US and European interests.

Maradona, in his personal life, was far from a god. Like the rest of us, he was just a person, and a fallible one.

Cheating, drugs, mafia connections, illegitimate children… This is just a part of Maradona's notoriously turbulent personal life. And it's not entirely surprising for someone who came out of poverty and suddenly became the center of the world to find all the wrong ways of adjusting to the attention. But there are also accusations of sexual abuse by a woman who was only 17 years old at the time, something that should not be shoved under a rug.

He might have been just a football player, but everybody has an opinion about him. Maradona's political alliances also made him not always the most easily palatable figure. Support for the Castros in Cuba, Chávez and Maduro in Venezuela and the Kirchners in Argentina put Maradona on the wrong side of history for many and made him a hero for others. It doesn't make his legacy any easier to define.

And Maradona was always defiant, always expressing his opinions, not always in the best ways. When in 2010 he was the coach of the national team and Argentina almost didn't make it to the South Africa World Cup, his declarations to journalists who had dared criticize him shocked some, but made others proud of their hero.

"La tenés adentro," he said in a press conference, a sexual way of telling someone they're wrong and should keep their mouth shut. It's been translated into "Suck it," but it's a little stronger in the original.

LTA, as the phrase was abbreviated, has since become a part of basic vocabulary in Argentina.

Is it vulgar? Yes. Is it Maradona? Absolutely.

I'm a die-hard Messi fan. If there's one thing I hate, it's that sports journalists in Argentina compare the two players and put down Lionel Messi for not bringing home the World Cup and for supposedly not being on Maradona's level.

The truth is they're both incredibly special players, but very different people.

Messi is humble and financially savvy. He's non-political. He's happily married to his childhood love from Rosario and lives a calm life with is family. He takes care of his body, without the excesses of someone like Maradona. He probably had much stronger support and loving relationships already when he was a child.

He stays away from politics and doesn't give out his opinion on everything in the world, but it's not because there's something wrong with him. He's just not Maradona. He's not interested in doing that.

Messi doesn't want to be a god. He just wants to play football. He does it better than anyone else, but he doesn't need to tell you that. While Messi has shown some character to a referee or two, he will probably never give the middle finger to anybody.

And even if he does bring home the FIFA World Championship in Qatar, he will never become a god for Argentinians like Maradona. It's not just the personal characteristics of both players that make for the differences in their star status. It's also what they represent.

In -86, the country was coming out of an incredibly traumatic dictatorship and an unnecessary war, but there was optimism. There was hope that with freedom would eventually come better days, that a return to Argentina's old glory and riches was possible.

But democracy didn't bring food to the table, cure disease or educate people's children, as President Raúl Alfonsín had promised in his campaign. It brought new disappointments. The late '80s brought hyperinflation, while the '90s arrived neoliberal economic policies and, eventually, a major financial meltdown and political crisis at the start of the new millennium. Argentinians gathered on the streets to chant "Que se vayan todos," demanding the entire political class to resign.

Since 2003, the return of populism has meant ever-increasing polarization and economic problems. Argentinians today want to believe, but they can't afford to. There's no amount of football that will change that.

In a way, the death of Maradona was the death of something bigger, and that's why thousands of devastated mourners gathered in the presidential mansion to say their goodbyes.

This story was originally published my be, on Medium.

More stories from Taru Anniina Liikanen and writers in Cleats and other communities.