by Andrew Beasley 6 months ago in premier league

Liverpool picked up a precious three points at Southampton, but what did the stats say about their performance?

Liverpool won their first away game of the 2019/20 Premier League season by beating Southampton 2-1 at St. Mary’s Stadium on Saturday.

Following their extra-time exertions in Turkey, in a match which started on Wednesday and finished on Thursday, this was always going to be a challenging fixture for Jürgen Klopp’s side. The Reds struggled, battled, and went from the sublime to the ridiculous, but ultimately got the job done.

While both teams missed excellent chances, Southampton will obviously rue theirs more. The Saints had three clear-cut chances, which is a serious achievement against the current Liverpool side.

In 2018/19, only Chelsea (twice) and Barcelona had more than two clear-cut chances in a game against Liverpool in any competition.

It will concern Klopp—and Kopites everywhere—that this has happened to Liverpool three times already this season. Manchester City had three in the Community Shield and Chelsea had three in the opening 90 minutes (plus two more in extra time) to go alongside Southampton’s efforts here.

There’s never a good time to waste a great opportunity, but the timing of Saints’ clear-cut misses will have been particularly galling to them.

At 0-0 in the first half, Adrián saved superbly from a Maya Yoshida header, before Che Adams headed over shortly before half time. With Liverpool understandably below par and lacking energy, it would’ve been hard for them to get back into the game had they gone behind.

With the Saints having later got back into the match at 2-1, and with just four minutes remaining, Danny Ings put a shot wide from inside Liverpool’s six yard box, to complete Southampton’s hat-trick of unconverted clear-cut chances.

So how did the team which finished 16th in the top flight last season hurt the European champions? The answer is simple: crossing.

Southampton created just seven chances in the match, with two of them coming via short passes approximately 25 yards from goal. But the other five all came via crosses from wide positions, with three of those resulting in the aforementioned clear-cut chances. 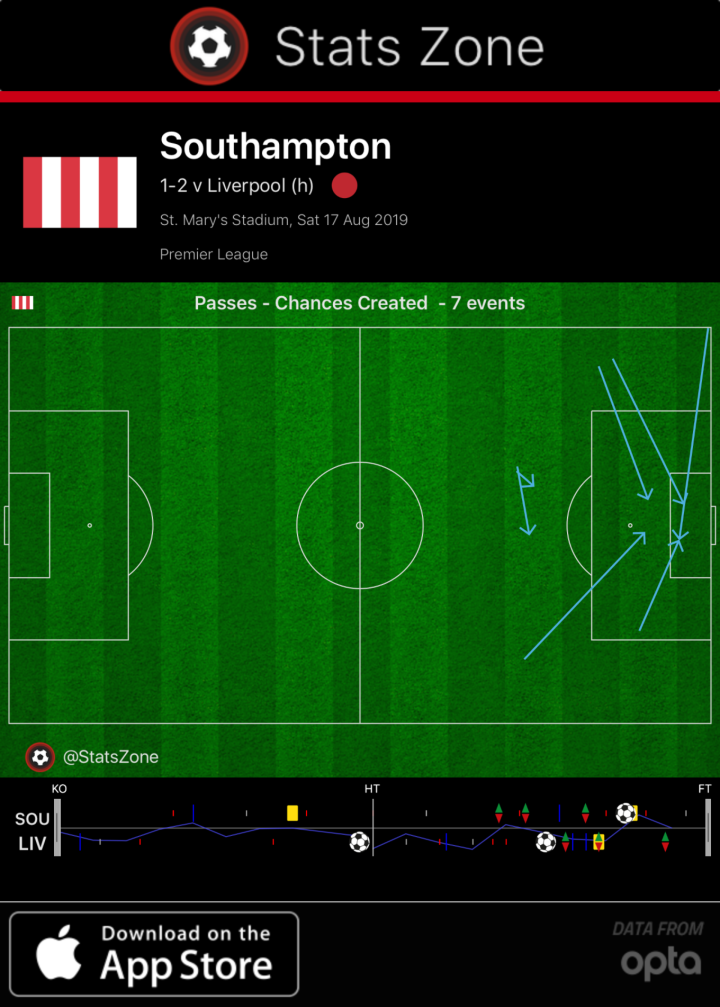 Map of chances created by Southampton against Liverpool

The Saints created 2.3 opportunities per game from crosses last season, and had two clear-cut chances per match on average, so they certainly outperformed their form from last term on Saturday.

All that said, Liverpool wasted three golden opportunities of their own, scored two excellent goals, and gifted Southampton their way back into the contest.

The undoubted star for the Reds was Sadio Mané. The Senegalese star bagged both of their goals in the Super Cup, and set the ball rolling on the south coast with a fabulous opening goal.

His performance was about more than grabbing the headlines with a wonder strike. Mané was top of the Liverpool charts for shots on target, chances created and tackles, as well as joint-second for ball recoveries. It was a marvelous effort on all fronts, with the two clear-cut chances he created the best element aside from his goal.

The second half was largely one way traffic. Liverpool had their hosts largely hemmed into their own defensive third. Roberto Firmino missed a golden opportunity—courtesy of a pass from Mané, naturally—before he scored the Reds’ second of the match and his first of the season. 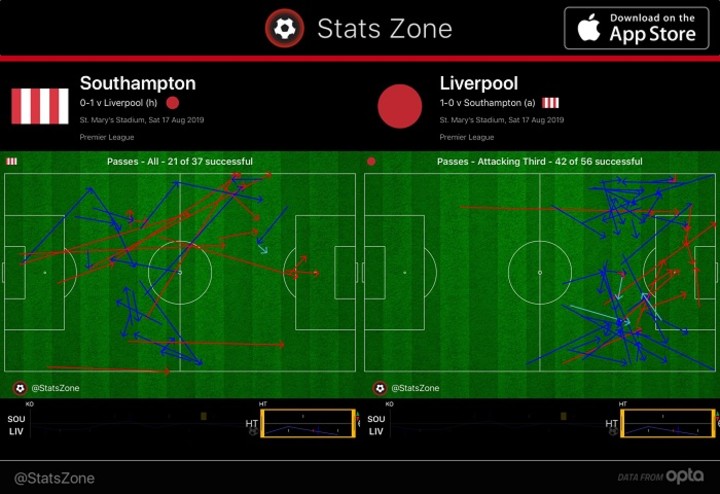 And that should’ve been that. And it would’ve been, had Adrián not blotted his copybook with the kind of error which is so bad, you only see it made by Liverpool goalkeepers.

It was broadly similar to the first clanger Loris Karius dropped in the 2018 Champions League final, but it made the game nearly identical to the match where Alisson Becker made his worst mistake.

Last September, goals from Mané and Firmino put Liverpool 2-0 up at Leicester, before Alisson was tackled trying to dribble an opponent, and Ghezzal halved the deficit.

On that occasion, the Reds were able to see it out without allowing the Foxes a decent chance, but Ings had the opportunity here to earn his side a point. Had he punished his former employers, they wouldn't have been able to complain.

It was a valuable win for Liverpool, and a tremendous effort considering their exertions in midweek. But there have unquestionably been defensive issues for the Reds so far this season, which Klopp needs to eradicate as soon as he can.

Freelance football (soccer) writer. I also like to write about other things which take my interest.

There are links to my work here: https://wakelet.com/@AndrewBeasley

See all posts by Andrew Beasley →