Are NFTs Just Another Get-Rich-Quick Scheme?

Digital artists are getting rich with non-fungible tokens (NFTs). But cryptocurrency instability and environmental concerns around NFT minting are threatening its long-term viability. 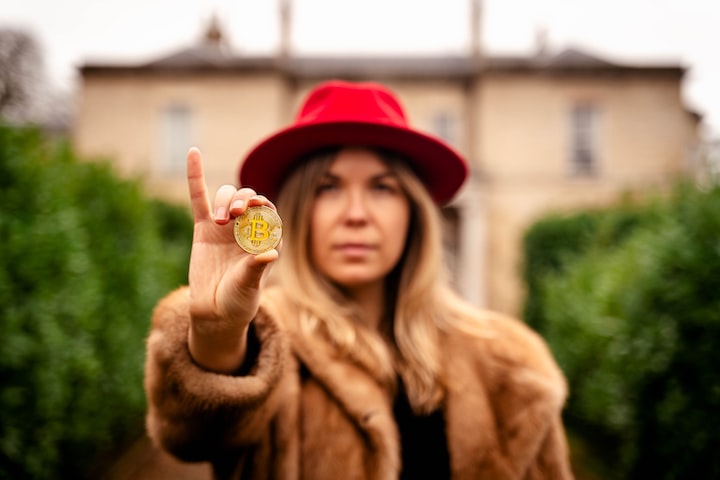 Photo by Baldvin Baittrok on Unsplash

In an ominous YouTube video, a masked man addresses the camera. He introduces an artwork that stands beside him. It’s an original 2006 screenprint by underground street artist Banksy.

Entitled ‘Morons’, the image depicts a crowded art auction house. With an arm outstretched, the auctioneer appears to be on the cusp of selling a framed artwork. The artwork is a quote that reads: ‘I can’t believe you morons actually buy this’.

He then takes out a lighter and sets fire to the artwork. We watch as the original Banksy burns. In less than six minutes, the physical artwork is destroyed. It now exists only as a digital representation owned by Injective Protocol.

Injective Protocol purchased ‘Morons’ for $95,000. They sold the digital representation of the artwork for $380,000. Not bad for six minutes’ work.

What is an NFT?

The digital representation the Injective Protocol created is known as an NFT — or non-fungible token. It sounds like novelty currency you hand over to a ride attendant at your local amusement park. But it’s much more than that.

So what’s the big deal? We all create, email, post and download digital files every day. Well, buckle up because this is where it gets complicated. The game changer here is that every NFT has a digital signature that acts like a certificate of ownership.

Think of it like this. If I email you a photo of my dog, you receive it as a digital file attachment that you can save, store, post and share. I still have the original photo file, but the act of sending it to you essentially created a second digital file that I do not control. You can email that second photo of my dog to 10 of your friends, and 10 more digital files of my photo will be created. Maybe your friends share the file with their friends, and on and on over the rainbow.

I still have the original file, but it means little because it has been reproduced and redistributed multiple times with no effective way of tracking it. That makes it difficult for me to establish exclusive ownership of the file. Multiple copies of my photo now exist somewhere in the great expanse of cyberspace, and all but the original are completely out of my control.

NFTs solve that problem. Thanks to its unique digital signature, an NFT — and its ownership status — can be tracked on a kind of digital ledger known as a blockchain. That’s another tech-head rabbit hole we won’t go down here, but it’s enough to understand that a blockchain makes it possible to establish ownership of an NFT.

Here’s the kicker. When you can establish ownership of something, you can buy and sell it. You can transfer ownership from the seller to the buyer. It becomes tradable. And that gives it value. Sometimes a lot of value.

Take the digital artist known as Beeple, for instance. In March 2021, an NFT depicting a mosaic of his digital art pieces sold at auction for $69 million. The digital art world went bananas. Suddenly a digital artist was selling his work for money that a Monet or Picasso would demand. It was unprecedented. And it kicked off a global gold rush for digital art NFTs.

How are NFTs bought and sold?

While Beeple’s opus was sold at iconic auction house Christie’s, most NFTs are bought and sold on digital platforms dedicated to trading NFTs. These are kind of like eBay for NFTs. Collectors can browse, bid, buy and resell NFTs that range in price from a few dollars to, well, many millions. OpeaSea, Mintable and Rarible are all examples of popular NFT trading platforms.

But the plot thickens. Unlike eBay, NFTs are predominantly bought and sold with cryptocurrency. You may have seen a lot about cryptocurrency in the news lately. That’s because it has exploded in value. In 2010, you could have bought one Bitcoin — a type of cryptocurrency — for around $0.08. Just over a decade later, one Bitcoin is worth around $37,000.

Sound too good to be true? Maybe it is. Cryptocurrencies have been incredibly unstable. When COVID-19 sent global financial markets into chaos in early 2020, the value of one Bitcoin fell from more than $10,000 to below $4,000. And that’s just one crash of many that have sent cryptocurrency investors into a tailspin over the last decade.

Will it crash again? Maybe, maybe not. Regardless, many investors have made millions buying and selling cryptocurrency — particularly among the younger generation. Nearly half of millennial millionaires have at least 25 per cent of their wealth invested in cryptocurrencies.

This is, in part at least, what’s driving the NFT gold rush. Investors love tangible assets. From buying property and gold to rare wine and fine art, investors have traditionally pumped cash into physical assets as a way of diversifying, building and protecting their fortunes.

So if your old-school fat cat oil tycoon traditionally parked millions in a Picasso collection, it makes sense that today’s cryptocurrency speculators are keen to invest in the digital equivalent.

How are NFTs made?

To turn a garden-variety digital file into an NFT, it must be ‘minted’. That essentially means the file owner is adding the file to a blockchain ledger so its authenticity and ownership can be established.

Once the NFT is minted on the blockchain, the file can’t be edited, modified or deleted. It can now be bought and sold on an NFT-trading platform.

But it costs money to mint an EFT. This cost is known as ‘gas’, and typically runs anywhere between about $50 and $200 per NFT. Although some NFT-trading platforms, like OpenSea, charge the gas fee when the NFT is sold, not minted.

What actually happens during the minting process is another highly technical headache. In a nutshell, a smart contract is created and a unique code is embedded in your digital file. This will be used as a record of ownership when the NFT is bought and sold.

And here we encounter another problem with NFTs. They have a real-world environmental cost — and it’s steep. While estimates vary widely, minting an NFT consumes about as much energy as a typical household uses in a month.

So we could be unleashing another carbon-hungry technology just as the planet teeters on the edge of ecological catastrophe.

This is a problem that surrounds the entire cryptocurrency marketplace. Cryptocurrencies like Bitcoin also need to be minted. This is yet another complicated process that asks human players — or ‘miners’ — to solve complex puzzles in order to add a new set of verified transactions to the blockchain. This is called proof-of-work mining and it requires a vast global network of energy-consuming computers.

So whenever an artist mints an NFT, and whenever that NFT is bought and sold, cyberspace miners go to work verifying each and every transaction on a global network of whirring, electricity-sucking computers. To put that into perspective, Ethereum — which is just one type of cryptocurrency — has been estimated to consume about as much energy as the country of Libya. And Bitcoin — another type of cryptocurrency — uses more electricity than Argentina.

This is also hurting the long-term viability of cryptocurrency. When Elon Musk’s electric car company, Tesla, announced it would no longer accept Bitcoin payments due to environmental concerns, the value of Bitcoin fell by more than 10 per cent.

There are, however, plans to make this process more planet-friendly. Computers running on clean energy would obviously reduce carbon emissions.

Ethereum — which is most commonly used for NFTs — has said it will transition to proof-of-stake mining in 2022. Some experts think Bitcoin will follow once Ethereum proves proof-of-stake works in practice.

But the global move to green energy and transitioning to proof-of-stake mining all relies on governments and corporations making good on vague promises. They might come through, they might not. For now, it’s a matter of ‘watch this space’.

Digital artists also receive a commission when their NFT is on-sold. So a digital artist receives the up-front cash when they sell a work, and they receive a small commission every time that artwork is sold on to a new investor. While only a relatively small number of NFTs will rise to the giddy heights of Beeple’s price tag, NFTs will help many digital artists to pay the rent and keep creating.

However, this is still the Wild West of the art world. Cashed-up organisations buying and burning physical artwork is questionable. You could argue that the Injective Protocol video is a form of performance art in itself. But do we really want to see physical art go up in flames to stoke the digital art gold rush?

Cryptocurrency itself has been traditionally unstable. It’s possible that its crash-and-dash days are behind it as it becomes increasingly mainstream. But if the cryptocurrency bubble does burst in the months or years to come, the value of digital art NFTs would almost certainly go into free fall.

Then there’s the environmental cost. If Ethereum does successfully transition to proof-of-stake mining, then digital art NFTs could certainly be seen as clean and green. However, if Ethereum fails to make the move, then NFTs will likely remain a carbon-hungry environmental nightmare.

So the best-case scenario is a vibrant, low-carbon digital art NFT market backed by stable cryptocurrency and built on planet-friendly proof-of-stake mining.

The worst-case scenario is a short over-inflated gold-rush period followed by a sharp fall in value as cryptocurrency collapses before spewing out more carbon than most small nations.

Vocal readers claim your FREE subscription to THE MALCONTENT.

Shane is just another human. He writes, he paints, he reads. He once got his tongue stuck to the inside of a freezer. Actually, he did it twice because he thought the first time might have been a fluke. https://themalcontent.substack.com

More stories from Shane Peter Conroy and writers in 01 and other communities.