3D Printing Is The Future Of Manufacturing

by salihu saeed 20 days ago in future

The future of manufacturing 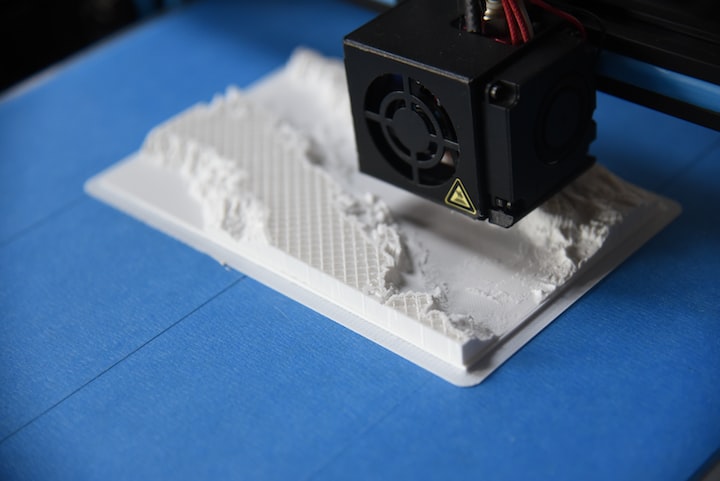 Photo by Amin Hasani on Unsplash

3d printing is a variety of processes in which 3d dimensional shapes are made with materials added together(such as liquid molecules or powder grains)typically layer by layer. This process is also known as ADAPTIVE MANUFACTURING.

The manufacturing industry is always looking at innovative ways of working, most especially when it comes to production, as every manufacturer loves to have production at a very fast rate. 3d printing has had such great advancement since the 1980s to date, driving down the cost of materials and equipment, giving a more feasible option to general manufacturing use.

But this technology did not start off as amazing as it seems today, in the 1980s ADAPTIVE MANUFACTURING was only known for prototyping and the friendly name that was given to it was rapid prototyping but what all started from making of prototypes is now a technology of revolutionary change that impacts the way goods are been produced.

The reason why 3D printing is the future of manufacturing

Unlike traditional manufacturing where lots of human labour is required to operate machines, 3d printers do not need expensive tooling, lengthy setup, much materials or a huge amount of labour force and also, plastic bottles could easily be picked from waste to make plastic filament for the 3d printer. With the aid of computer software, an individual can make a CAD model then easily export the STL file format to the 3d printer and make his/her 3d object/product. The process whereby an individual is able to manufacture is what I call indie manufacturing and 3d printing gives the opportunity for indie manufacturers to be part of the goods production business which results in cut down of cost and mega industrial production.

3d printing has also proven itself useful during the coronavirus pandemic as even regular people can afford to print face masks and also ventilators at a very low cost, maybe 70 to 80 % lower than the average price of traditionally manufactured face masks or vents.

A house with A living room, kitchen, bathroom and two bedrooms cost just $4 000 in Mexico. And this project was carried by The U.S based nonprofit NEW STORY, that teamed up with a tech company ICON to build the world’s first 3d printed neighbourhood.

The AERONAUTIC field is also not behind as 3d printed airbus parts can be made with few materials with lesser weight and this leads to the cut down of fuel consumption.

3d printing technology is a revolution that turns billions of dollars in years of development to make a product into a few million dollars in a few weeks.

When it comes to speed production of goods/products 3d printing holds a strong reputation. Now I want to bore you with the technical aspect of how 3d printers are able to print at a magnificent speed but I talk about a couple of projects that have proven 3d printing technology to be speed reliable.

Let’s reflect on the housing project in Mexico by ICON. the $4000 houses are built in less than 24 hours, how amazing is that. This just proves a future where homes are no longer built-in months but within a day and when you come to think of it even tall buildings for offices or hotels would be done in a matter of days. Imagining the world tallest building built in just 3 days how awesome would that be?

Another project carried by a team of giant corporations like Y COMBINATOR, U.S AIR FORCE and NASA with a big investor MARK CUBAN, have created the world largest 3d printer with the aim of making new space rockets in just a week and some days, now what normally might take 18 months is done in just a few days. Now, how awesome does that sound?

I am sure going to space will be a lot easier in the future, maybe even you! my reader might be able to afford the privilege of going to space in a future where 3d printing is fully matured and makes space-travelling a lot cheaper.

Artificial Intelligence enables computers to think and learn while 3d printing is an innovative manufacturing process. These two technologies could be combined.

Ok, it’s no doubt that artificial intelligence is taking over all the sectors of technology and will soon take over the world but I don’t mean terminator style.

AI can improve all the stages of 3d printing workflow, AI can explore generative designs to produce complex parts, AI can increase the performance of 3d printers by reducing errors and facilitating automated production, AI can guarantee accuracy and repeatability.

Now let’s look at some examples of how AI can improve 3d printing technology through some promising research.

Researchers explain that AI can evaluate data to identify hidden relationships in material properties. For example, FRAUNHOFER institute is using AI to enable 3d printers to work with tough materials such as superalloys which are commonly used in extreme heat environments like power plants, and oil and gas industries.

At TU Delft university scientists use AI to create an extremely compressible yet durable material.

Another company called DESKTOP METAL has created software that uses an algorithm to generate the most efficient strongest design using the least amount of materials. So what DESKTOP METAL is basically doing is telling the computer to give the strongest shape to withstand any condition and the computer does just that.

One of the major problems in medicine is not having a sufficient number of tissue and organs that you can replace in patience and 3d printing technology plays a great role in the field of medicine by being able to print human body parts and even organs if science allows it.

The WAKE FOREST INSTITUTE FOR REGENERATIVE MEDICINE is developing methods to manufacture human tissue with the use of 3d printers to fabricate a range of functional human body parts. The aim of this research is to make printers that can make body parts from tissue gotten from an individual to be able to transplant the printed body part into a patient that needs it.

In the future human body parts will not only be replaced with metal as you see in movies but also be replaced by body parts from actual human tissue, now this makes a way to great technological advancement in the field of medicine.

However, we are going to a new face of 3d printing where we go from prototyping to mass production and that has huge implications. Really, what we are witnessing now is the advancement of 3d printing technology as the future of manufacturing in the making.

See all posts by salihu saeed →