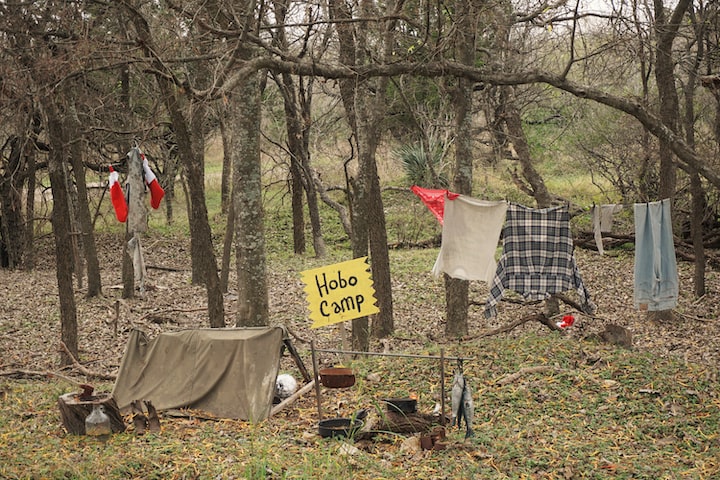 Photo by Akshay Gujar on Unsplash

If you’ve seen a freight train, you can conjure an image of yourself sitting in an open rail car as scenery swiftly passes by. I’ve stood next to a track (at a safe distance) when a freight train sped by. The raw power is both terrifying and inspiring.

Railroads began operation in the United States in 1827. 62 years later in 1889, railways crisscrossed the entire continental United States. The fortunes amassed during that era are still alive and well among the generations of people who inherited them.

For others, the railroad was a ticket to a particular kind of freedom. If done right, one could travel coast-to-coast with nothing more than a ruck sack and a handful of coins.

In 1889, North and South Dakota, Montana, and Washington became states. It was also the year of the first National Hobo Convention held in St. Louis, Missouri. 63 hobos were gathered in a jungle (a communal encampment of hobos). They’d been kicked off numerous trains and run out of towns where they had stopped because they had no means of income. That group of 63 would become known as Tourist Union #63.

Those 63 rail travelers — the Tourist Union — created a kind of code of conduct that has surprising applicability today. With very little modification, I’ve adapted it for 2022 living.

1. Decide your own life; don’t let another person run or rule you. This one requires no adjustment. It is just as true then as it is today. This, of course, isn’t carte blanche to break laws (see #2 below). It means that we are free to make individual choices according to our own desires and dreams.

2. When in town, always respect the local law and officials, and try to be a good person at all times. Obey the law. Be civil. You can disagree with someone and still be civil about it. You don’t have to storm government buildings or light cars on fire.

4. Always try to find work, even if temporary, and always seek out jobs nobody wants. By doing so you not only help a business along, but ensure employment should you return to that town again. In the current climate, this is particularly applicable. How many people are out there right now who are completely capable of working but won’t? Realize that by not working you’re taking advantage of those who are willing to work so you can satisfy your own selfish desires.

5. When no employment is available, make your own work by using your added talents at crafts. Side hustle anyone? Starting your own business has never been easier than it is now. There are a lot of people in the world so even if it’s been done a thousand times, you might be the one who does it in a way that makes it valuable to someone else.

6. Do not allow yourself to become a stupid drunk and set a bad example for locals’ treatment of other hobos. The push for legalized “recreational” drugs and the increased use of alcohol throughout the world are making a lot of stupid drunks. We’ve all seen more than a few videos of drunk people face-planting on the sidewalk attempting to do something no sober person would attempt.

7. When jungling in town, respect handouts, do not wear them out, another hobo will be coming along who will need them as badly, if not worse than you. See points 4 and 5 above. Handouts should be a last resort. Welfare programs, except for cases of extreme duress, were never meant to be a life-long or multi-generational means of income. They were meant to bridge a gap and care for those who are truly incapable of caring for themselves.

8. Always respect nature, do not leave garbage where you are jungling. Respect nature. We’re all stewards of the environment around us. If we don’t take care of the earth, it might just get rid of us.

9. If in a community jungle, always pitch in and help. If you live in any type of community, be a good citizen by getting active in your community. You get to decide for yourself what that means.

10. Try to stay clean, and “boil up” (to wash with warm, soapy water) wherever possible. Good personal hygiene. Enough said.

11. When traveling, ride your train respectfully, take no personal chances, cause no problems with the operating crew or host railroad, act like an extra crew member. Let’s extend this one to operating our own motor vehicles. Seriously? When did risk-taking and law-breaking become the norm? How many of us have witnessed terrible accidents and near misses because someone was either careless or impatient?

12. Do not cause problems in a train yard, another hobo will be coming along who will need passage through that yard. The next time you pick up your phone while driving on the freeway, consider the number of people who will be seriously inconvenienced when you cause an accident. Thousands of people can be hours late because of the carelessness of just one person. And what if someone else dies? What if you die? Don’t cause problems in the “train yard”.

13. Do not allow other hobos to molest children; expose all molesters to authorities…they are the worst garbage to infest any society. Categorically, anyone who abuses a child is mentally unwell. There’s no other satisfactory explanation. For those who cannot be rehabilitated through extensive therapy, the strictest punishments of the law should be imposed.

14. Help all runaway children, and try to induce them to return home. In this modern age, this doesn’t just apply to people who have run away. It also applies to those who are figuratively lost. There are endless opportunities to mentor and shepherd youth and children today. It really does take a village.

15. Help your fellow hobos whenever and wherever needed, you may need their help someday. This one takes us back to number 3. Always be willing to serve and help someone in need. It doesn’t matter if you know how to solve the problem, just do something. Those in need will almost always appreciate your efforts, even if they a little off point.

Turns out, there’s a lot we can learn from 63 essentially homeless rail hoppers. If something from this list really hits home with you, please leave a comment. I read every one.

If you enjoyed this article and are not a member on Medium, sign up by clicking here. I receive a portion of the subscription proceeds, and your money goes to support a lot of other great writers.

More stories from Aaron Pace and writers in Wander and other communities.