When Does It Snow in New York?

by Joe Dorish 6 months ago in america

When does it snow in New York? This article will give you that answer, which is especially useful to tourists and visitors to the city in order to plan for the trip or vacation.

What you will find listed here are the snowiest months in New York plus all the months of the year which can possibly get snow. Overall, New York is not a particularly snowy city, but at times the city can and does experience heavy snowfall.

Questions tourists might ask about New York regarding snow are: Does New York ever get snow in November? In what months do I have to worry about snow if I'm visiting New York? What time of the year does it start snowing in New York City?

Here are the answers to those questions. All the weather data mentioned in this article comes from the National Weather Service. The weather records for New York City are from Central Park and date back to 1869.

When Does it Start Snowing in New York?

If you want to visit New York in October you do not have to worry about snow. Generally, the month of November is also snow free in New York.

The city averages just .3" of snowfall annually in the month of November. Having said that, though, on November 15, 2018, a record 6.4" of snow blanketed New York and caused a traffic nightmare in the city. Normally, New York can handle 6" of snow without too much trouble but the city was not ready for that much snowfall that early in the season.

The 6.4" was the largest amount of snow to ever fall in the city that early in the year dating back to 1869.

Here's a list of all the months of the year when snowfall can occur in New York.

Months When Snow Can Occur in New York

As mentioned above the annual average snowfall amount in November in New York is just .3". The earliest snowstorm in November was the 6.4" listed above that took place in 2018.

It can snow in New York in November but it's not too likely.

December is the month when you really have to start worrying about snow in New York. The month averages 4.8" of snow, which might not seem like a lot, but 37 times since 1869 the city has had a snowstorm of 6" or more in the month of December.

Over a foot of snow has fallen nine times in New York City in the month of December including a monthly record of 26.4" that fell in December 26 to 27, 1948.

February is the month when you are most likely to experience snow in New York as the month averages a record 9.2" of annual snowfall. Since 1869, there have been 68 times when a snowstorm occurred in the month of February in New York.

There are plenty of years with little or no snow in February in New York but February is the month you are most likely to see snow in the city.

March can be a real crazy weather month in New York. Since 1869, there have 30 snowstorms of 6" or more in the city. The record snowfall for the month of March is 30.5" which is a lot of snow for New York City which averages 25" of snow per year. It's also been over 70 degrees in New York in March many times.

Snowfall in April in New York City is not unheard of but it's not very common either. Just six times since 1869 has the city had a snowstorm in April. 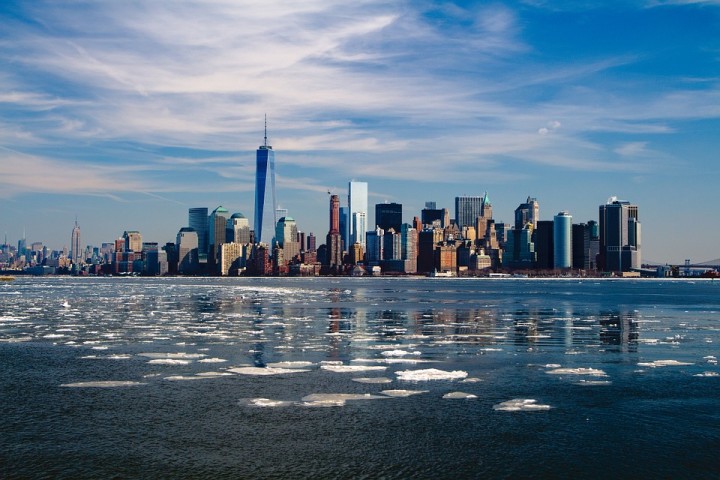