When You Realize That The Crazy Neighbour Lady is You

by Lindsay Rae Brown 3 months ago in gender roles

Why the phrase "calm down" makes me rage every time 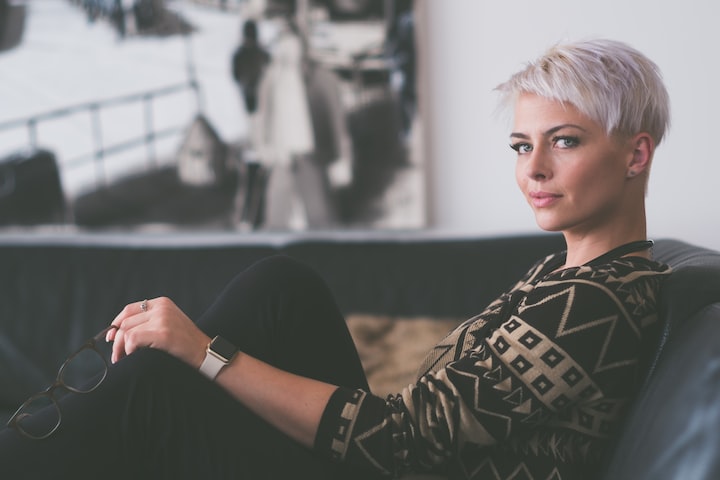 Photo by Jens Lindner on Unsplash

There are screams coming from outside my house right now. This is strange because things like this don't happen in my neighbourhood. My street is a quiet one. Kids happily bound up and down the sidewalk with a dog at their side and one of those enormous hula hoops you spin with a stick.

These kids, I assume, are the grandchildren of my neighbours because anyone I have met living in this place over the past five years has been 70+ years of age.

I love my street. It's perfect.

But now, out of the blue, there is screaming.

F-bombs and C-cannons are echoing throughout the dry summer air, and the sharp pitch of an enraged woman is unmistakable.

"I can't believe you slept with her," the faceless woman's voice says.

This sounds interesting; I think while making my way to the bathroom window. It's located on the side of my house, so I feel that my prying over-enthusiastic face will be hidden from the perps.

"You're grasping at straws, you psycho *bleep bloop blah de duh*," a man's voice retorts, a little too calmly for my liking.

"I saw the DM's," she says, her voice transforming into something demonic.

I quickly run into my bedroom —where my husband Jamie is sleeping off a night shift—and close the window. I do this for no other reason than to keep him sleeping. I don't want him to wake up and tell me to stop being such a nosey neighbour.

The yelling persists, and I wonder where they are in proximity to my house. Leaping from the living room window to the back spare room, I am a rat searching for her next crumb of food—this drama is the sustenance I never knew I needed.

There! Just beyond the back fence, I see two heads bobbing up and down. I have located the disturbance.

"You never loved me," Faceless screams, "I could have fucked your brother, you know."

"He'd never touch a *bleepity bloop* like you. Crazy bitch." This dude has one foul mouth, I realize, thinking I'd like to unleash my own string of swear words upon him.

I think I could be up to the task.

As I make my way out to the garden to do some weeding that absolutely cannot wait, I think about my life. What have I become? Since when do I need to eavesdrop on a fighting couple to make my existence feel complete?

"Don't lie to yourself, Lindsay," the tiny devil on my shoulder says. "You've always been this person."

Except, of course, when I'm the one fighting in the back alleyway.

During the dark years, those eons ago when homemade tattoos were a thing and heartache beyond measure was always just around the next corner, I was the one who fought in public and screamed my woes to the world. Maybe back then, some bored homemaker went to great lengths to watch me and my boyfriend scrap it out as well.

I am crying the kind of screechy moan that might indicate a wombat is dying within the tight confines of my throat. My wails can be heard clearly in the neighbourhood as I hang out of a ground-level apartment window.

I can't remember what the fight is about. Maybe it was from the time I walked in on him and my supposed best friend performing some very sexual massage techniques on one another and them both fervently denying that anything was going on.

Or perhaps it was because he had just told me that my dad was a good-for-nothing drunk. Or, of course, it very well could have been the fact that he had quit another job because he had a difference of opinion with the management.

The reason doesn't matter. What matters is that the man is getting in his car to leave. In that calm infuriating way, he says he can't be around me when I am like this. I'm crazy.

It's not the name-calling that gets me so worked up. I've heard that all before. It's the gaslighting. Of course, I don't know about the term gaslighting yet, so, once again, I have no words for the defeat that is building up in me.

Why can't he understand that my feelings are valid? Even if the massage was innocent, can't he see how that may be misconstrued? Doesn't he know that when he speaks ill of my parents, it crushes my dreams for our future because when it comes down to it, if I have to choose between him and them, it will always be them?

The problem is, I can't think of any of this logically right now because the sound of my voice is so piercing, so unimaginably penetrating, that my brain has become not unlike a croc that's hungry for flesh. I am of a one-track mind now. I must get his attention before he leaves.

It seems that even when we aren't fighting, my croc-brain is still on this mission. I only have enough energy to keep him around. I cannot focus on anything else.

In order not to go crazy, I read many books. So many that he calls me a loser or a fat nerd every time he walks into the apartment to find my nose buried in words.

"Jesus, you're 18 years old. Are you that much of a loser that all you can do is read?" he says, trying to make a joke. He's one of those people who brag about never having read a book, so it is difficult to see the humour in his teasing.

Why are you with him? Why do you do this to yourself? I want to ask the faceless woman behind my fence now. Why do you let him speak to you this way?

But I know why she does it. I know why she follows close (but not too close) behind him as he walks down the gravel alleyway. She is crying and pleading for him not to walk away, just as I cried and begged for that long-ago boyfriend not to drive away.

There is a particular talent that the man in the alleyway and my former boyfriend possess.

It is artful in its execution because the victim doesn't even know it's happening. They are masters at handing out tiny jabs that at the time seem like nothing. Eventually, though, they build and become the reigning voice in their victim's head.

"Stop laughing. You're not funny."

But because of all the pent-up hurt and baggage you've carried around from the emotional war waged on you day after day, there's no way of staying calm with the confrontation. You immediately scream, and the tears, which are rivers, flood the floor where your heart currently resides.

There is no calm because you don't know how to be calm. You have to scream and let out all of the pain that this person has inflicted on you.

Now, here in my garden, as I listen to the faceless woman and her partner, I realize that it is me who is no longer calm. My hands are shaking. I'm thinking about that ground-floor apartment building window. I can clearly remember the hatchback's tires spinning out of the parking lot while I cried through a screenless window.

The neighbour, one floor up, says, "No wonder he left you. Just calm down, you crazy bitch."

And there it is —my fault. The fight, the screaming, the disturbance landing squarely on my shoulders simply because I wasn't the one to keep calm.

Which reminds me, this jerk-off in my back alley is pissing me off.

So I grab the closest garbage bag I can find, empty a nearby ashtray and carry it out to my cans beyond the fence. Now is as good of a time as any to take out the trash.

I'm not a confrontational woman, so maintaining a stern amount of "crazy lady" eye contact with him is not easy as I lift the garbage can lid and throw in my nearly empty garbage bag. I realize their faces are not familiar. I don't even think they live in the neighbourhood. Just a passerby that serendipitously happened to be roaming my alleyway.

"Got a problem?" the man asks.

"Nope," I reply, then turn to the woman whose face is streaked with tears. "You doing okay?"

She nods but is embarrassed when realizing someone has heard their argument. And it is that embarrassment on her face that makes me say the next thing. It's the way she looks down to the ground in submission as though silently understanding that the fault is hers for the scene that has erupted.

"Hey, you know if you need anything, I'll be home all day, so just come over," I say. But I don't know if I sound confident enough for the invitation to stick.

Maybe getting involved in these stranger's arguments wasn't my best idea. Seeing as how they both walked away without saying another word, my intervention likely meant nothing. The thing is, I'd like to hope that in years from now when this woman is in a better spot, she will remember this day.

She might be folding laundry or plotting world domination and hear the c-word (crazy) get thrown at some woman in her back alleyway. She may boldly, uncharacteristically, go out to investigate further.

She'll remember a time when her life was immeasurably more erratic and scary and downright painful. Despite the awkwardness, she'll recall that having a strange woman in her corner felt good. It felt safe, even though it was only for a few split seconds.

She will invite the woman from the back alley into her home even though she knows that the invitation will not be accepted.

She'll do this with her heart pounding and palms sweaty because her own bad memories are raging surface-side. But she'll do it anyway because, in the end, she knows there is a sort of truth in this gesture that will not go unforgotten.

They can tell us to calm down. They can gaslight us while pretending they've done nothing wrong. They can say, with straight faces and narrowed eyes, that we're crazy bitches.

But what they don't know, what they aren't expecting, is that we crazy bitches stick together.