The Lineage of Stones

by malin evita 12 days ago in body

This is for you, and all your marks of memories. 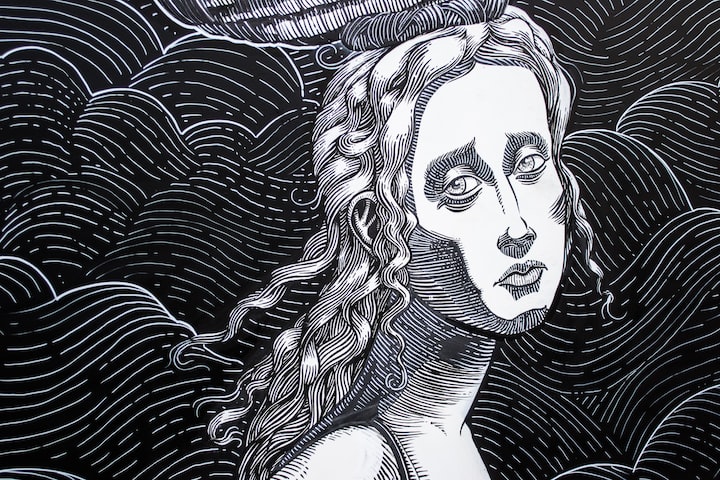 Photo by Diogo Nunes on Unsplash

From the rough cut black boulders to the salt-soaked sand, the water washes back down. Retrieved, only to be pushed up the lineage again by unrest waves from miles away. Sand. Pebbles. Stones. Boulders. The coast is silent, only tickled by the childlike giggle of the blue-grey ripples. Her feet quiver as she balances breathlessly between the ancient smooth rocks and fresh-cut youths, longing to feel the softness of the sand. Her feet, marked by purple razor cuts on her ankles from her blossom years of shaving and blue bruises from decades of forced high heel parading. Her feet, that held her above the coal of a bonfire; dared by defiance from men who didn’t trust her judgement. Who didn’t listen to her voice. Who didn’t look above her chest. And so she made them scream. Her feet, blessed with impenetrable tough skin on her heels that people call cave-like, protecting her from heat and crabs playing hide and seek.

As the crisp touch of the ocean greets her by the shore, she loosens the tie around her waist and lets her dress fall upon the borderline of glistening seaweed and lifeless shells. The dress, with its blue satin and orange tree pattern, given to her by her life’s partner, before two became one. Before she left the cold white building a thousand miles north, holding her lover’s soft wrinkled hand, brushing aside her snow-streaked hair. Now, she wanders into the gentle ripples. Her nude skin met with a shivering breeze and the vague heat of the late sun, who smiles at the deep furrow between her brows and the freckles on her collarbones. Her freckles, which she used to hate as if it was dirt seeping from her pores. Her freckles, which now glow like sun-filled constellations, speckled on a clear summer night.

A gush of wind. A splash of salt. A flustered laugh from her dry lips as her knees goes underneath the waterline. Her bold knees, skinned from falling off red bikes with strapped packs of newspapers, heavier than her one-meal-self. Her bold knees, bruised by pressure from her boss and playful pleasure to her wife. Her bold knees, that carried her through life.

Ripples turn to waves, hungry to engulf her. But her feet stand firmly planted. Mustering up the courage to dip her dry waist, she takes a deep breath. Swallowing the pure, virgin air into her lungs, blackened by an on-and-off relationship with Mr Mayfair. An addiction, first bred from the breath of everyone around her. Then used to suppress her appetite to fit into her first white dress. And then, to cope with the suffocating stress that very costume brought along. She lets out a tribal shout and sinks her hips below. Her hips that dip with white tiger scars, marking the months they filled with fat as she carried her first. Waiting with eagerness to be used for child support. The water washes over her navel; the end of a cord to her mother that was cut before she ever got to meet her. Her mother, who her father told her she looked like. Her mother, who her father told her she moved like. Her waist is submerged; the water cooling off the burn marks from his clutched hands, grabbing her for dessert after dinner.

She squints, deepening the tree-root creaks around her eyes as the roaring sun leaves the air bleeding in reds, pinks, and purples. The bare horizon, a line only broken by a faraway ship singing to the whales, bathes in all its world-ending glory. Reflecting the streaks between clouds, blending sea and sky as one. The nearing heat radiates onto her scarred chest and the last left hanging breast; like the immortality of fruit seeds that gives and grows, never to be gone without a trace of future life. Her chest, with thin wrinkled skin and sunkissed blemishes, spreading to her sturdy shoulders that never faltered—no matter the weight of sin or laundry baskets.

She bites her ripe lower lip one last time, grazing her teeth against the scar that has formed over life; swollen plump from fearing and yearning alike. As she spreads her arms out—her strong arms, that have fought fights and stirred rice—she closes her lash-less eyes and lays back against the quiet sea. Her shoulder short hair form a crown of white snakes, dancing freely in the water with re-invigorated life. A sigh, stemming from the bottom of her being, flows through her chest and climbs through her throat, coughed from her lips as one final breath of relief.