Learning To Love That I Will Never Live an Aesthetic Life

The aesthetic was never really what I was after. 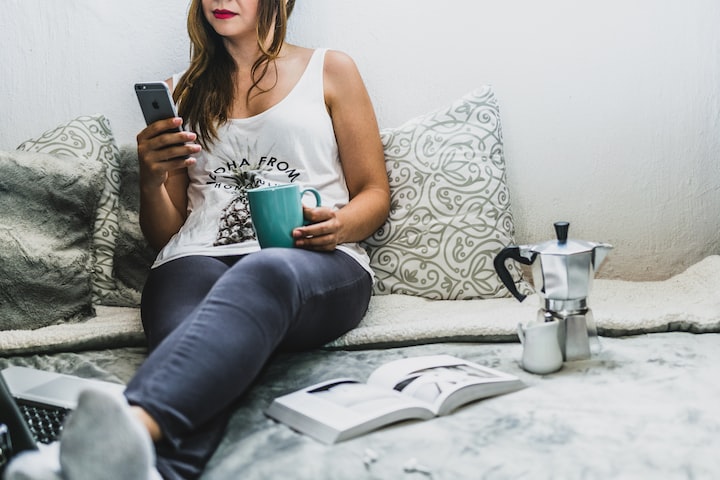 They aren’t me. And that’s ok. Or at least that’s what I keep telling myself.

Don’t get me wrong, I’ve tried.

In high school, I tried my hardest to be a Scene Queen. I was an East Texas girl living in rural East Texas and with a Southern Baptist pastor as a father. I was never the queen of any scene.

In college, becoming a carefree, quirky hipster girl was my goal. Becoming a manic pixie dream girl became the goal.

During the pandemic, I was convinced that my chubby, 27-year-old self needed to become an e-girl.

But I will never be an e-girl. No matter the number of pink leather body harnesses that I buy from Amazon.

Having a strong aesthetic takes effort, and it turns out that I don’t care enough to do the boring stuff.

I'm a single mom, who works remotely in tech. I don't see other adult humans most days. Some days, I do good to shower and brush my teeth. My hair lives in a ponytail. At 4 p.m. today I realized that my shirt had been on, both, backward and inside-out all day long. It was parent-teacher conference day.

I have the ability to turn heads for an event, but it’s not the same as having an ‘aesthetic’. I don’t love fashion enough. I am in fact a chaos gremlin who wishes she loved fashion.

It’s not that I’m unattractive. I’m cute as a button, and my grandmother agrees.

I judge myself for not being able to commit to a look. The right sense of style can be a shortcut to a new friend group. Fashion holds social clout and creates a thin veneer of acceptance.

More than that, I wanted a strong sense of self.

I survived my childhood. Deep in the bible belt, I was raised in rural Southern Baptist Convention churches where my father preached. (The same church that is currently being investigated by the FBI for allegations of abuse.)

Those women are unacceptable, unholy, and impure. I was taught that the only acceptable personality for a woman to have, is sweet, graceful, soft, and kind.

There is nothing soft about me. I'm a ball of anxiety with sharp edges. I've tried my entire life, but there is no way that I can fit within their social norms, without further hurting myself.

My childhood was one giant game of make-believe, where I pretended to be whatever I needed, in order to keep myself safe.

Having a strong aesthetic would have put me in danger as a kid. You can't pivot and act like you're something else, if your entire closet screams 'goth'.

I performed for other people instead of figuring out who I was.

Knowing intuitively what to say to people to get them to like me? I can do that. It's not the same as knowing what brings me joy, or knowing who I am so that I don't have to change everything about myself to make myself worthy of being loved.

Women with a dominant style sense always seem to know who they are. It was never any specific style that I wanted to emulate.

It’s the confidence of a sixteen-year-old with a scrunchy on her wrist, Doc Martens crunching on gravel, and the audacity to topple the patriarchy.

The goth girls that I worshiped as a teen, make the world move for them with every step of their black leather boots.

The Vsco girls at my local mall made a grown man cry for touching one of them. Their only weapon was their words. She didn’t make a joke and brush it off so that he didn’t become uncomfortable.

TikTok Bimbos will save the world. They retake their femininity while reading communist literature, and are able to rally people behind a cause.

Maybe that’s what’s attracted me to these women for so long. They aren't afraid of knowing who they are.

I'm still afraid of learning who I am. I’ve accepted the fact that I do not, and most likely will not ever live an aesthetically pleasing life. Not because I don’t want to, but because I don't actually need to.

I gravitate to these styles because of the strength of the women who inhabit them.

Read More From Me: https://medium.com/@haleyrymel

More stories from Haley Rymel and writers in Viva and other communities.