The Year We Were All Afraid of Filthy Money

by Amethyst Qu 7 months ago in economy

My emergency fund wasn't as risk-free as I thought 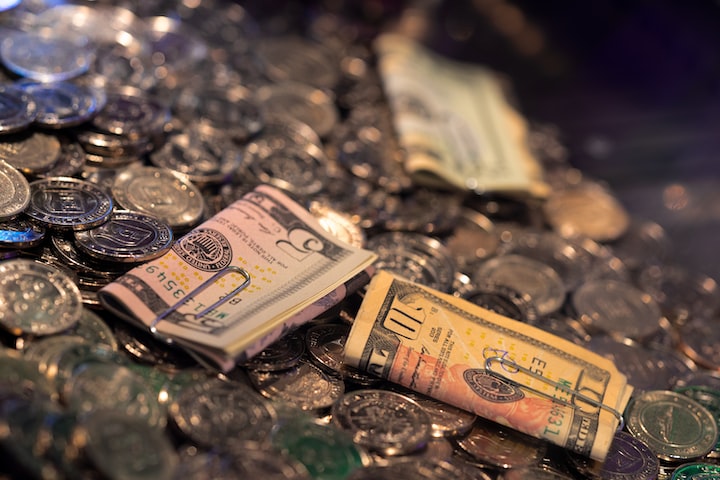 Photo by Sophia Müller on Unsplash

In fiction, when the world ends, our first fear about cash is that it will lose all value. How foolish we were to put our trust in mere paper. What matters during any apocalypse worthy of the name is how many guns and Krugerrands we’ve got.

In life, when our world ends, our first fear about cash is that it won’t be enough. We’re in a hurricane, the power’s out, and every single branch of every single local bank is flooded. Or there’s a divorce we never saw coming until our erstwhile spouse cleans out the bank accounts. Or the IRS is threatening a freeze, a bill collector threatens a garnishment.

Hands up if you predicted a disaster where credit cards, touchless payments, and direct deposits worked — and yet paper money was viewed with suspicion. Even refused.

I don’t see any hands.

On February 14, 2020, the Chinese government gave its banks a most unlovely Valentine. They were required to disinfect all cash and then store it for up to 14 days before it could be passed on.

In March, a UK publication shared an exclusive suggesting the World Health Organization thought cash could spread the virus. In a cooler time, one might question why WHO would share this information exclusively instead of widely. But we were all in full panic mode by then.

Many believed the story. The rest of us worried about it.

By May, the fear of cash was so endemic in California the Los Angeles Times ran a story called, “In a pandemic, no one wants to touch it. Why cash has become the new Typhoid Mary.” Staff writer James Rainey talked to various anxious people about their reasons for refusing cash. One man said that, even before the pandemic, he feared paper money because it was frequently stained with icky fluids.

That’s about as appetizing as all those scare stories about toilet plume.

My emergency stash of paper money couldn’t be infected. I withdrew it from the bank before taking an international trip to a dollarized country in May 2019. No emergencies arose — they so rarely do, after all — but I didn’t return it to the bank afterward because hurricane season was coming. Cash on hand is always a good thing, right?

Now I was left holding the bag. How could I prove my cash was free of killer germs? There’s no cheap, convenient test for paper money.

Also, I was left wondering who else was holding the bag. No way to know.

When others are losing their lives, you hate to whine about the fear your cash will become hazardous waste. It’s a secret, shameful, petty fear. Still, you fear it.

Like they didn't have real things to warn you about

The World Health Organization wasn’t amused by cash-money hysteria. A WHO spokesperson told Market Watch the organization “did NOT say banknotes would transmit covid-19.” Their remarks to the UK publication had been “misrepresented.”

I don’t doubt it for a minute. As science marched on, it became pretty obvious how the virus was transmitted. It’s airborne if anyone is still wondering.

A couple of months back, in a welcome sign of spring, our masked grocery store clerks are no longer wearing gloves. By now, almost all of us have heard about the new guidance the CDC issued on April 5:

“[C]ontact with a contaminated surface has less than a 1 in 10,000 chance of causing an infection.”

But it’s low enough you’d be silly to worry about it. We don’t pick up airborne viruses by handling dirty money. Our cash is not a deadly poison. Spend it in good health.

I thought I’d identified the risks of cash — theft, fire, flood, loss of spending power to inflation. But nobody’s prescient enough to identify all forms of risk.

Wild card/black swan events happen. As I became financially independent, I got rid of most of my credit cards — but not all of them. The card I kept made it easy for me to keep food on the table during a national emergency.

Not my garden, and not my gold. Not my bag of junk silver. My credit card. More specifically, the number on that card that could be used to purchase things without anybody else touching it.

Don’t buy into absolutes like, “Cash is king,” and “Credit cards are the devil.” Be flexible. Regardless of how much money you have, life can throw you a curveball you never saw coming.

If you enjoyed this article, I'd be thrilled if you gently tapped the <3 button and/or left a small tip.

Read next: Ways to Learn to Invest, Even If You Don't Have a Wall Street Background