Why Russia’s Greatest Opponent May Not Be NATO or Ukraine

by Varga Norbi 9 months ago in politics
Report Story

But a third major-scale player 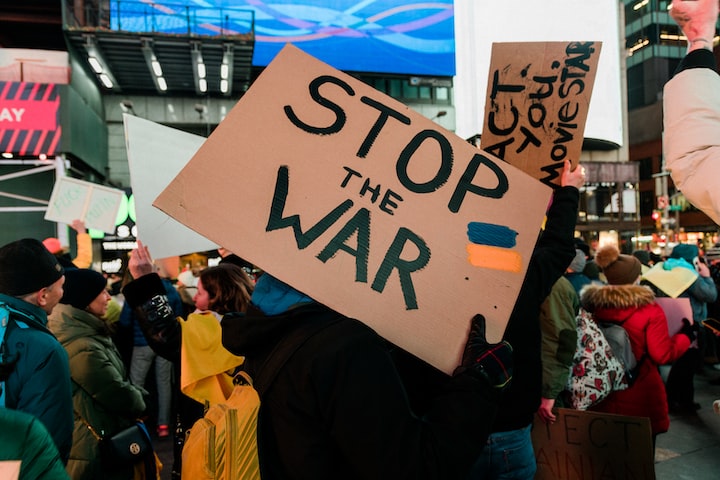 Just as the world was hoping that things would slowly return back to normal, another major event marked the beginning of 2022, as tensions between Russia and Ukraine, backed by the North Atlantic Treaty Organization, began reaching stressful peaks. Sure enough, it wasn’t long until the “formerly” socialist superpower launched its campaign into the sovereign country of Ukraine, in Eastern Europe.

However, despite the foreseeable threat of the North Atlantic Treaty Organization, it seems like the Russian leader, Vladimir Putin, was not expecting another major player to join the scene.

Despite the major gap in military power between Russia and Ukraine, the defending nation appears to be putting up a more than impressive performance against the dreaded attacker, as the Ukrainian forces have allegedly suffered far less casualties than their opponents. This also came with a formidable show of courage from the Ukrainian citizens and military, whose sacrifices have repeatedly delivered a strong message to the Russian leader.

Most of the world, including Russia, likely expected the fight to be highly one-sided, but through heroism and strategic support from NATO, this battle is going into a very different direction so far.

With Ukrainian soldiers bravely giving their lives in order to defend their homelands, families and national pride, the hope and morale of the defenders are surprisingly stable, even during this atrociously difficult time.

We must also acknowledge the efforts of the North Atlantic Treaty Organization in supplying Ukraine with military resources, as well as the remarkable individual aid offered to the refugees by the neighboring states. Nonetheless, it seems like the rest of the world (almost) unanimously decided to support those in need, as the general public opinion about Vladimir Putin suffers its greatest downfall to date.

With gypsies from a Ukrainian village allegedly stealing a Russian tank, the offensive having to halt their advance due to a lack of fuel, and Russian soldiers appearing on TikTok seemingly not knowing why they’ve been deployed in the first place, the modern dictator’s efforts have been looking rather shaky, which partially leads us to our main point.

The internet doing its part

Back in the days when Europe experienced its greatest military conflicts, namely referring to the World Wars, the appearance and development of the internet was nowhere close in the timeline, but this time, the world has a much larger variety of ways to get access to information, and act upon it. Although NATO began implementing sanctions against Russia, and is likely to keep doing so in order to account for the numerous war crimes committed in the conflict, the internet was also quick to respond to Putin’s behavior.

With the infamous hacker group “Anonymous” declaring that they will be taking action against Russia, numerous websites also decided to restrict, or block, access to their services for devices connecting from Russia. A silly, yet prime example would be the world’s largest pornography website, as strange as it is to say this.

Not only that, but the digitalized movement against the Russian “president” also sparked changes in the physical world, as people stopped purchasing goods and services from Russian-owned companies, namely petrol from the brand “Lukoil”, which has a considerable presence in Eastern Europe. Some stores across Europe and North America even decided to take their Russian imports off the shelves, in a small, yet remarkable effort to deliver a strong message: We won’t forget about this!

Perhaps most importantly, however, Anonymous managed to hack Russian television stations to play Ukrainian songs and real, true information and news regarding the situation, effectively taking away one of the most powerful tools in a totalitarian leader’s arsenal, censorship. This outstanding feat in itself quickly proved just how powerful the internet really is, and anti-Putin propaganda on social media appears to be on a continuous rise.

What can we do to help?

With great power, comes great responsibility, which applies to all of us browsing the web. For those located in countries where Ukrainian refugees might be heading, joining in on the humanitarian efforts, either through physical contribution or small donations, is the go-to and most effective way of helping those in need. Everybody is allowed, or should we say urged, to donate to trusted organizations which focus their efforts towards aiding the refugees, but we should also point out the importance of researching the organization or foundation prior to making a donation, making sure that your money is headed towards the right direction.

On the other hand, what we can all do to make things just slightly better without much effort is to have our news regarding the situation sourced from trusted providers. In the digital era, we are more aware than ever of the power of misinformation, which we should strongly fight against. Even if we as individuals can easily identify false or subjective news, other members of our society are much more vulnerable than those born and raised with the internet at their fingertips.

In order to achieve this, we recommend directly checking the source of every news or informative article regarding the situation, and flagging / reporting it accordingly if it looks suspicious beyond reasonable doubt. A collective effort in this direction can eliminate the vast number of fake or misleading content pieces pushed by the Russian government through various low-end media channels, taking away more of the totalitarian arsenal.

This being said, we sincerely hope that peace will be restored as soon as possible, with the guilty facing proportionate consequences for their actions. Russian officials have already sent out an invitation for peace negotiations, as we are waiting for a response from the Ukrainian government.

Thank you for reading, and let us support Ukraine during these harsh times!

More stories from Varga Norbi and writers in The Swamp and other communities.