The Never-Ending Battle for Unity

by Dan Pittman 2 months ago in politics

Degrade division and unify as a nation 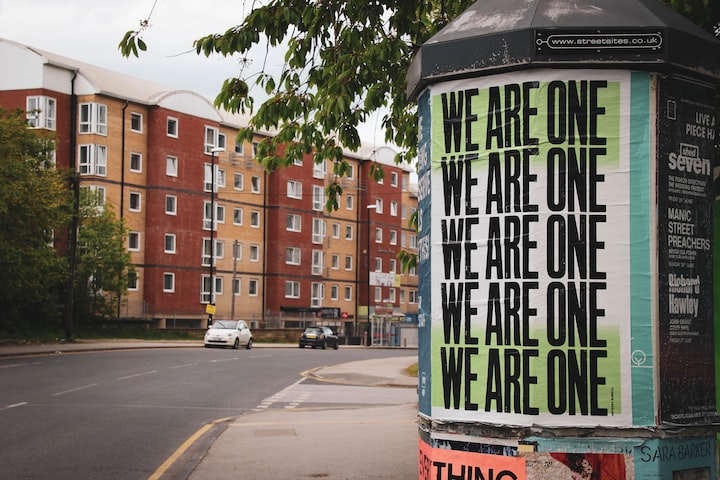 Photo by Gary Butterfield on Unsplash

The country is divided. The feelings of hope and prosperity dwindling. It’s us versus them and of course whatever side I am on is the correct side, right? Wait, the country really is divided, right? We all hate each other and identify by a donkey or an elephant… right?

I cannot help but address such a serious topic by adding a healthy dose of sarcasm. Humor is an adaptive tactic to confront harsh truths. The truth is, we are not a country divided. We have hope and prosperity at our fingertips. A remarkably small percentage of people are truly convinced that we all hate each other and there is no hope and an equally small number genuinely identifies by their politics.

I must begin with a note reflecting who I am so you as the reader can better understand my perspective. I do not align with Republicans or Democrats. I do not align with a third party candidate or as a Libertarian. I am a man who watches politics and gets a queasy feeling of dissatisfaction. I am of the belief that the leader of our country should be a philosopher with a deep understanding of stoicism, as stoicism teaches the importance of one's words, actions, and pursuits as to define oneself as pursuing the path of simply being a good person.

Moving forward I will be touching on aspects that may come off as controversial, but the intent is to cause one to step back and think. Perspective on who we are as a nation and as individuals is not only helpful, it is undeniably necessary. After all, writing about non-controversial topics doesn’t feel like a fulfilling endeavor, but an empty pit to collect scribbled thoughts that will ultimately decay.

The Digitalization of Division

At this moment in time I am deeply saddened to witness such division and blind hatred oozing out of my phone like toxic sludge. It’s a strange reality to live in when I go about my day at a coffee shop or grocery store and enjoy the smiles of strangers as I smile back at them. Opening doors for one another, making small talk and giving genuine ‘Thank you’s” and “How are you’s” are the standard daily practice. Yet when I enter the social media realm, the clouds suddenly block out the sun and a single crow caws and fades into the distance.

Why does it feel as though we are up against it? Why does it feel as though the sun is a bit more dim and the moon is presenting its dark side? I have been asking myself questions like this for quite awhile and have done extensive research to discover why we are where we are.There is much to be said about the effect of social media on an election. Journalism combined with boisterous opining with a veneer labeled “FACT”.

Online we create an environment that allows us to compartmentalize like-minded people and are given ample opportunity to wipe out those who think differently. This creates a funneling of sorts, where we begin to see what we expect to see. We are exposed to events such as a police officer using deadly force and only pay attention to the comments and viewpoints that align with our ways of thinking simultaneously casting aside the opposition. Scales are tipped, our reality is shaped, and opinions are formed.

About a year ago I stumbled across a man named Bret Weinstein. He is an evolutionary biologist, former professor, and well-known podcaster and host of The Dark Horse Podcast. Bret has been a lifelong democrat and has been able to provide some remarkably deep insights on social movements and the political environment we find ourselves in.

Bret started a movement titled Unity 2020. Here is some basic information to describe the movement:

“Unity2020 envisions balance and cooperation between people from different sides of the political aisle. This is an opportunity to focus on our common interests and use our differences to diversify our options for growth and change.

Unity2020 empowers the American public to reclaim a divided country. A courageous, competent pair of patriots can lead this country in service of the people. Not beholden to any party and not constrained by conflicts of vested interest, this team will build a future with a clear national vision, a wise plan, and – for the first time – full representation of every American.

We have been scorched by the very parties meant to protect us from the flames of injustice. Self-serving interest groups have burned every member of our society, whether for their color or conviction. We cannot burn the system: we must heal it and save ourselves.

Once elected, they agree to govern as a team. All decisions and appointments will be made jointly in the interests of the American public. Only when they cannot reach agreement, or when a decision does not allow for consultation, does the President decide independently. A coin flip determines which candidate runs at the top of the ticket.”

Since the election has progressed without this party on the ticket, the name of the movement simply remains Unity. Unity is about open discussion of real issues, conversing without an aisle dividing us, but as a unit moving forward toward a shared goal.

Unity brings up the issue that has become increasingly prevalent: Those who have differing viewpoints, opinions, or even factual evidence that is contrary to what we believe, we are quick to dismiss it as false. I say “we” because as human beings, we are riddled with faults, biases, and blunders - it’s what makes us human! This is a monstrous problem because it closes the door to an opportunity to learn and grow. It places us on a treadmill with a television portraying progress that is not being made in reality.

The Science of Creating Problems

A 2018 study titled “Prevalence-Induced Concept Change in Human Judgment” has opened my eyes to a remarkable phenomenon. In this study, the researchers came to the conclusion that people continue to find signals of problems, even when they are no longer there. These problems varied from color recognition, to aggression, to ethics. “When instances of a concept become less prevalent, the concept may expand to include instances that it previously excluded, thereby masking the magnitude of its own decline” (Levari, David E., et al).

One of the more disturbing findings was “This ‘prevalence-induced concept change’ occurred even when participants were forewarned about it and even when they were instructed and paid to resist it. Social problems may seem intractable in part because reductions in their prevalence lead people to see more of them.”

Could this phenomenon also be applied to racism or police violence? The question must be asked, even though it is a sensitive and uncomfortable one. We must find the crux of the issue through scientific research and hard data, that is the way to solving real problems.

The point of all of this is to remind ourselves that our current system is operating in a way that promotes division and hatred. It is a system that digs and digs for problems in order to stir up controversy, slap on a foam finger and point it at “the other side”. This is no way forward, and no way to honor the wonderful people of this country.

Unity is the way forward. It is a chance for the highest office in the United States to truly work for the people and fight against what divides us. We live in a wonderful country full of wonderful people and wonderful ideas. One of the greatest ideas is Unity, the coming together of minds with varying perspectives laying down an integrated and well-constructed path forward for every single citizen.

Weinstein, Bret. “A Plan to Save Our Republic.” Unity2020, Articles of Unity, articlesofunity.org/the-plan/.