My Home Is Burning

by Chance F. 6 months ago in activism

A Personal Look at The California Fires 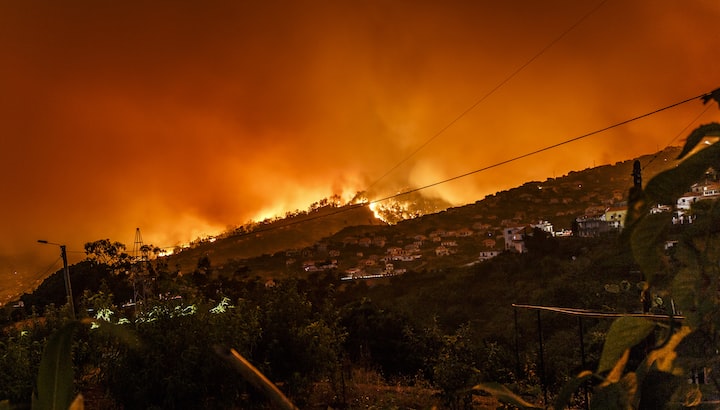 Photo by Michael Held on Unsplash

You've probably seen pictures and videos of California on the news by now. Forests, and businesses, and homes all flattened by the blazes. There is also a lot that you didn't see on the news. You couldn't see the yellow skies, not just during the fires but for weeks after. You couldn't feel the burn that comes with having more smoke in your lungs than air or feel the sting in your eyes. You couldn't hear the barely masked panic of officials as they tried to convince us that everything was going to be fine. Everything wasn't fine. Everything isn't fine.

A lot of people lost their homes and some people lost their lives, and while I personally didn't lose my house, everyone knows someone who did. No one could go outside for days because we couldn't breathe and many people had to leave behind everything but the saddest thing is that smoke-filled skies are not uncommon. As time has passed the number of days that my home was nearly uninhabitable just got larger and larger. They told you when the large fires hit but what they don't tell you about is the smaller fires that burn hot and fast and often. After the largest areas of fire were doused the news stopped reporting and Californians have been left to rebuild homes we know will eventually just be leveled again. At the rate California is burning I will be shocked if in 10 years there is anything left.

Most people see California as beaches and clear skies and good times but what they don't usually talk about is the fact that we produce 13% of all of the produce in America. We are also the sole producers of multiple goods like almonds, raisins, olives, and more. If you don't live in the state it is easy to see this as a faraway issue that, while sad, will never affect you. I want to make it clear that this is not the case. Californian goods are an irreplaceable staple in the diets of most Americans.

My home is burning and soon yours might be too. California has undoubtedly been the canary in the coal mine, and while we have been the first to take the main stage for our climate disasters we will not be the last. The unlucky few who lose their lives and their homes will soon become the unlucky many. It's no secret that global tropical storms have been increasing in frequency and severity and places that are known for being hot and dry are getting snow for the first time in decades. California isn't the first climate issue, its just the first one that many people have noticed.

So the fires are awful and affect all of America and (more importantly) are a side effect of a much larger issue that needs to be dealt with, but what are you supposed to do about it? Some things are simple. If you visit California brush up on your fire safety and don't set off any fireworks or leave campfires unattended. Other things aren't quite as easy. Ultimately these fires are a result of climate change. The worse the state of our environment gets the worse the fires will get and so on. Educate yourself and others about what changes you can make personally to decrease your impact but more importantly push for systematic change that will decrease the effects of climate change. Just talking about it and normalizing the discussion about environmental issues is better than nothing. Hopefully, we can make a more livable future for everyone. I want to reiterate that this isn't a far away issue. It might be too late for my home but hopefully, it isn't too late for yours.

activism
Chance F.
Read next: New Mexico—It's like a State, like All the Others!
Chance F.
See all posts by Chance F. →