by ANUJ RATHORE about a month ago in trump
Report Story 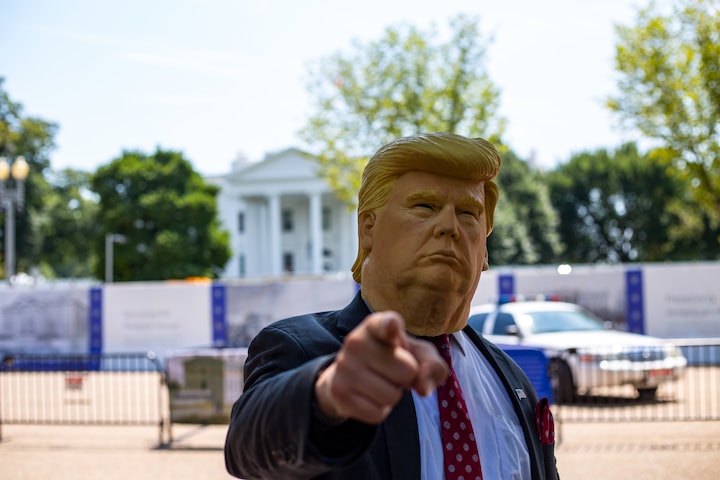 Former President Donald Trump lost roughly $600 million of his net worth during his time in office as President of the United States. He lost another $700 million following the Capital Hill riots and his impeachments after several organizations stopped doing business with Trump or any of his properties.

See: 13 Best Items To Buy in Bulk at Sam’s Club This SummerFind: 9 Bills You Should Never Put on Autopay

In 2022, Trump made back roughly $430 million of those losses with his newest endeavor: Truth Social. Forbes reports that the social media platform, which Trump announced in October 2020 and launched in February 2022, has been downloaded more than 1.4 million times.

Forbes pegs Trump’s current net worth at $3 billion, in total, which is just slightly less than his net worth during his first year in office. The Trump Media and Technology Group, which owns Truth Social platform, announced plans to merge with a SPAC. Since the announcement, Trump Media shares climbed from $10 to $50. Forbes estimated that Trump owns at least 50% of the shares. If the deal goes through, which Forbes says is not a sure thing, Trump could sell his shares for $10 each, if desired. None of this, however, plays into his newfound wealth, since the deal is not yet done.

Donald Trump’s Net Worth
At the time of his inauguration, Donald Trump was the oldest person to be sworn into the office of the president of the United States. He was 70 years, 220 days old on Jan. 20, 2017. (That title now belongs to President Joe Biden, who was 78 when he was sworn in). Trump beat out a number of contenders to become the Republican nominee for the 2016 presidential election. He went on to defeat Democratic nominee Hillary Clinton. His term ended on Jan. 20, when Biden began his term as the 46th president.

Trump was born into a wealthy family and inherited about $40 million from his late father, real estate developer Fred Trump. In 1971, Donald Trump became head of what would later be known as The Trump Organization.

Trump’s earnings and title have since helped him develop more than 500 companies. The business mogul has his stake in luxury golf courses, skyscrapers, television shows, casinos, books, merchandise and, now, social media. These endeavors have helped him reach the estimated $3 billion that put him on the Forbes Billionaires List for 2022.

Donald Trump’s Business Successes
Back in 1980, Trump landed a deal with Hyatt, the city of New York and the unprofitable Commodore Hotel beside the Grand Central Station, earning the right to renovate and rebrand the ailing hotel into the Grand Hyatt. The property became an instant success, making Trump one of the best-known real estate developers in the area.

In 1984, Trump completed construction on the 68-story Trump Tower, which serves as headquarters for The Trump Organization to this day. The building includes a 60-foot waterfall and, on opening day, had five levels of retail stores and restaurants.

Trump has owned a slew of successful businesses and properties, among them Trump Place, a luxury residential community spanning 92 acres. The Trump International Hotel & Tower Chicago has a hotel, condos and numerous restaurants and shops. The success of Wollman Rink, a Central Park staple, is arguably credited to Trump.

However, following the storming of the U.S. Capitol, New York City announced that it was severing its business ties with Trump. On Jan. 13, 2020, Mayor Bill de Blasio announced that the city would be terminating three contracts with The Trump Organization that would cease its operations of a carousel in Manhattan’s Central Park, skating rinks and a golf course in the Bronx, Reuters reported.

Donald Trump’s Failed Businesses
Donald Trump has major business wins to his name, but he also has some big losses.

In 1988, Trump spent $365 million on a fleet of Boeing 727s, as well as landing facilities in Boston, New York City and Washington, D.C. He also bought the rights to paint his name on a plane. His attempt to build a luxury flying experience under the Trump Shuttle name failed, however, and the company was decommissioned.

One of Trump’s highest-profile business failures is Trump University. The unaccredited online college was launched in 2005 and closed down in 2010. Three Trump University lawsuits plagued his first presidential campaign, alleging that Trump University was a scam that cost students tens of thousands of dollars. Trump settled the lawsuits for $25 million, though he did not admit any wrongdoing.

Donald Trump’s Wife and Family
Donald Trump has been married three times. He was with his first wife, Ivana, from 1977 to 1992. The couple had three children together: Donald Jr., Ivanka and Eric. The three eldest Trump children — along with Ivanka’s husband, real estate investor and developer Jared Kushner — were highly involved in their father’s presidency.

Trump married Marla Maples in December 1993, two months after Maples gave birth to their daughter, Tiffany. The couple divorced in 1999.

Trump has been married to his current wife and former first lady, Melania Trump, who has an estimated net worth of $50 million, since 2005. Melania is the mother of Trump’s youngest son, Barron.

Donald Trump’s Lifestyle
Donald Trump sometimes lives in a three-floor penthouse in Trump Tower with his wife, Melania, and son Barron. The luxuries the family enjoys at Trump Tower include an indoor fountain and a door encrusted with diamonds and gold, Business Insider reported.

Among Trump’s other notable properties is Mar-a-Lago, where he spent 25 of his first 100 days in office. He moved back to the estate after his term as president ended, CNN reported. The luxury club is worth $180 million, according to Forbes, and sits on 17 acres of valuable South Florida land. Trump bought the estate — which boasts 58 bedrooms, 33 bathrooms, 12 fireplaces and three bomb shelters — for the bargain price of $10 million in 1985.

Before having access to Air Force One, Trump shuttled between campaign stops in his $100 million Boeing 757 adorned with gold seatbelts. His fleet of luxury vehicles includes a Rolls Royce, an electric blue 1997 Lamborghini Diablo and a Mercedes-Benz SLR McLaren.

“You always have to talk about health. You look like you’re in good health, but tomorrow, you get a letter from a doctor saying come see me again. That’s not good when they use the word again,” he said.

He added that he thought “a lot of people are going to be very happy by my decision,” but did not confirm nor deny whether he would run for presidency again.

More stories from ANUJ RATHORE and writers in The Swamp and other communities.