Freedom is an illusion.

by 7 Cubed 10 days ago in activism

Do you think you are free? 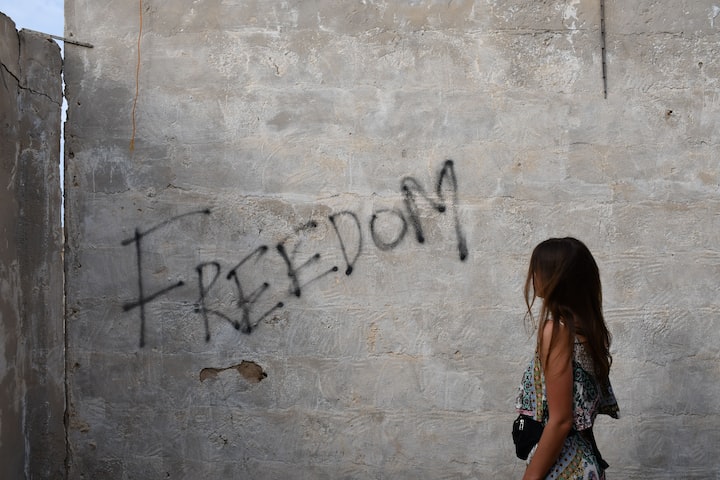 Photo by Hanna Zhyhar on Unsplash

Does this title anger you? Bother you? Not concern you at all? Is freedom an illusion? As incredible as it might sound, the vast majority of us are not free. Holy mother of all saints!! Depending on the country in which we live, we might feel more or less a type of freedom.

Choice. That is the activity that binds us. It is also an illusion. We choose every day. We choose to get up, to go to work, to feed ourselves, to shower, to help our children, to educate ourselves. Let’s face it — when we choose to be with one person and shun another, we deem the first person more important to us than the second. Choices involve priorities. Should our choices be to the exclusion of all else that makes up our lives? Perhaps. Do we believe we have the freedom to decide? Can we make that choice? I think humans believe that freedom and choice are linked and that freedom equates to having a choice.

In an ideological sense, freedom is the birthright of every human being. History is full of wars to enforce this thought. In the last 6–10 years young people, who have little memory of the long struggles against fascism and communism, may be losing faith and interest in the democratic project. This retreat means a spread of antidemocratic practices around the world. In August 1968, when Soviet tanks entered Czechoslovakia to put down the Prague Spring, a small group of dissidents gathered in Red Square in Moscow and unfurled a banner that read, “For your freedom and ours.” So for a bright future in order to maintain our own freedoms, we must defend the rights of our counterparts everywhere. Because the reality of globalization is that our fates and choices are interlinked.

As internet access expanded through the world, critical speech and activism moved online, with governments playing catch up to take control of digital spaces ever since. Therefore, state and non-state actors in many countries are exploiting opportunities created by the pandemic to shape online narratives, censor critical speech, and build new technological systems of social control. First, political leaders used the pandemic as a pretext to limit access to information. Second, authorities blamed the pandemic to justify expanded surveillance powers and the deployment of new technologies that were once seen as too intrusive. And third, a transformation toward “cyber sovereignty,” in each government impose their own internet regulations in a manner that restricts the flow of information across national borders. In short, some governments around the world failed in their obligation to promote a vibrant and reliable online public digital sphere. Rather than protecting users authorities reined the digital freedom. Recent events in Hong Kong illustrate the implications of greater state control over the online civic space. The leadership in Beijing directly imposed a National Security Law on the autonomous region prescribing harsh punishments for those who do not obey. To escape such penalties, websites, online forums, personal social media accounts, and entire apps engaged in closures or deletions. Also do not forget the “Great Firewall” of China the world's most heavily fortified digital border who controls what information enters and exits the country. Alarmingly, these sorts of practices are not unique. Even states across the democratic area are erecting their own digital borders. Legislators in Brazil, Nigeria, and Turkey passed or considered regulations requiring companies to keep user data from leaving their countries. Trump administration tried to ban TikTok and Wechat apps in a move that can be classified as a step toward digital sovereignty.

Hence, did you know that the condition of democracy especially freedom and human rights has grown worse in 80 countries because of the pandemic outbreak? Why? You might think that in extreme situations, we only retain freedom of thought. Nope. Abuses of power, silencing critics, and weakening or shuttering important institutions was the main response of governments. Making a depth assault on freedom in every aspect. Sri Lanka’s experience illustrates the trends. The government of Prime Minister Mahinda Rajapaksa accelerated the oppressive agenda to control independent reporting and unfavorable speech by ordering the arrest of anyone who criticizes or contradicts the official line on the pandemic. Human rights abuses were propagated, especially against the minority Muslim population. In Nigeria, the pandemic exposed a crucial assertion. A big difference. Freedom for the poor and another one for the rich people. Bahrain, Egypt, Iran, Kuwait, Morocco, Saudi Arabia, Tunisia, and the UAE have all introduced vaguely written laws; they are meant to stem the related “fake news,” but have implications for all online speech and activism. Furthermore, 400 people were arrested in Turkey for publishing social media posts about the pandemic. Residents in 10 Middle Eastern and North African countries faced arrest and detention for voicing their online opinions. We know for sure that the pandemic will be gone, but the effects of reactionary censorship, vague online laws, and surveillance tools could have consequences that long surpass it. To avoid such an uncontrolled shift, we must ensure that any new program/law complies with human rights principles. Broad and disproportionate surveillance imposed today should be avoided. Remember. Freedom only counts if it's available to all, regardless of race, religion, or cultural background.

What we could prove after these recent events is that a dystopian model for the future was created. It’s based on increased nationalist and propagandistic rhetoric in an effort to drown out calls for transparency and accountability. Innovative technological surveillance, crackdowns on individuals within and outside who share information that contradicts regime messaging, and the persecution of potential critics. Who will adhere to this authoritarian model? With no choice (read freedom) turning back, no do-overs?

Receive stories by 7 Cubed in your feed
7 Cubed
Read next: The View from the Dumpster