An Urgent Call to Action

by Nikki Pants about a year ago in opinion

A plea to all our elected officials and politicians, both Democrat and Republican, and everything in between. 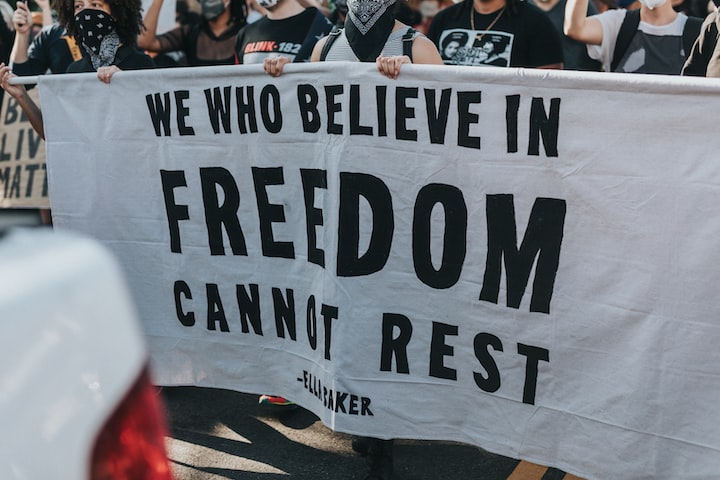 I am writing about the largely peaceful protests based on racial inequity and injustice around the country, the upcoming election, and the polarization and devastating division in America today. I am not a Trump supporter by any stretch of the imagination; I am a registered independent, a Bend, Oregon native, a recovering alcoholic, and a self-professed empath. I truly believe my calling in life, my purpose, and my passion, is to help others, to heal and uplift the disenfranchised, the underserved and underrepresented.

I genuinely despise partisan politics, but I believe I understand the fundamental differences between conservatives and progressives right now; one group is concerned with individualism, the American dream, and the ability to care for their families through their livelihoods and the economy. The other group is concerned with taking care of society as a whole and ensuring that the poor, the sick, and the wanting are taken care of, because a truly civil society is measured by how it cares for its entire population. It has taken me the last four years to overcome my anger of Trump being elected, and my shock that so many voted for him, but everyone has their reasons for doing the things they do. I have just recently come to the realization that not all people who voted for Trump are racist, and they aren’t all bad people, they simply believe he can help the economy, in turn, helping them realize the American dream.

I have done a lot of soul searching since the passing of Ruth Bader Ginsburg, and since watching the documentary on her life and legacy, was truly moved by one of the lessons she took from her mother, a tenet that she modeled her life around; do not do anything out of anger. Anger is an important emotion if we channel it properly, that is, if we use it to chase our passions and use it for good. When used negatively, anger simply engenders a similar response; an eye for eye makes the whole world blind. There are outliers and extremists on all points of the political spectrum, and we are seeing that in the looting, rioting, and destruction at the otherwise peaceful protests.

I wholeheartedly believe in the message of Black Lives Matter; I want to work towards a truly equitable country for all races, genders, religions, and beliefs. I understand my white privilege, and I would never dare to speak for the black community or tell them what a better way to go about things may be. As the oppressor, we must work with the black community to cover all angles, to discover the truly egalitarian way. However, the people who take advantage of those protests by employing anarchy and destruction are diminishing the message of BLM; to fight for the unalienable right to equal justice and racial equity. I understand that some people express their pain and frustration through anger, but as RBG understood, we will not gain the full support we need through anger and division.

However, in discussing all that is going on right now with my friends from both sides of the aisle, I am starting to understand why BLM and support for anti-fascism is not gaining as much traction as it could and should be! My lifelong friend lives in Portland, and until recently, we were butting heads on his support for Trump. He cannot get behind BLM because he is seeing the vandalism, the stealing and looting, and the destruction to property that is harming people and businesses who do not wish to be a part of the political fray. They simply want to operate their businesses and take care of their families, to not be harassed because they refuse to support one side or the other. Losing their livelihoods is not fair to those people and will not generate support; if they wish not to involve themselves in the polarizing topic of politics, that is just their right as Americans.

I want to reiterate that I am not a Trump supporter; I believe that he is a textbook narcissist who only cares about money and power, and that every decision he makes is not to help all Americans, but the enrich himself, his family, and his wealthy supporters. I did not vote for him, nor do I intend to vote for him in the upcoming election. However, he is the captain of this ship, and as I am a passenger, willing or not, I do not wish for the ship to go down. His refusal to condemn white supremacy shows that he is unwilling to alienate what I believe to be a large swathe of his most loyal supporters, that is, white supremacists which, in turn, is why he refuses to correct course on his response to the protests, and our demands for racial equity and justice. Yes, white supremacy is loathsome, vile, and disgusting, but some people are truly just ignorant. I have found that many people who claim to hate black people or gay people or Muslims, etc., is because they have never gotten to know any of those people personally. If they had, they would know that nine times out of ten, they are intelligent, kind, thoughtful, capable, regular human beings as well, that they most likely share more similarities than differences.

This current health scare Trump is experiencing is hugely important because it could determine the course of this election, and more importantly, the history and legacy of this country. If he has the capacity to come through this with the awareness that COVID truly is serious, then he might be able to come to the table, speak with the Democrats, and find a way to safely contain the Coronavirus while also protecting the livelihoods of millions of Americans. If he can do that and convince more independents and swing-voter’s then he will win this election. Now, do not mistake this for meaning that I have hope that Donald Trump will have a come to Jesus moment; if he is the narcissist that I believe him to be, he may recover and come out swinging, saying that if he could beat it at his age, it must not be that bad and we must re-open the economy immediately; this will have grave and far reaching consequences.

If he fails to see that re-opening the economy completely, and without restrictions, will worsen the economic strain that the virus has already taken; if more of the population gets sick, and/or worse, during this flu season, the economy will be ruined no matter what! If we cannot convince him and his people that the GOP needs to work with democrats to address and change systemic racism, and to be more cautious about the pandemic going forward, then this country is destined for dire consequences I do not wish to imagine right now. I saw a video on Facebook the other day of a Trump supporter saying that, as God is his witness, if Joe Biden wins, he, and people like him, are ready for a civil war. We cannot let it get to that point - my god, hasn't 2020 done enough to all of us!

I am pleading with the universe that this message will spread, that it will be taken seriously. The nation is watching helplessly as lifelong politicians play a game of chicken with the lives and happiness of the American people. Mitch McConnell, Chuck Schumer, Nancy Pelosi, and the rest of their cohorts have become so bloated with wealth, and so warped by that reality, that they have forgotten that the lower and middle classes are facing the very real consequences of their infighting. WE are the ones who see the riots and looting and deal with their aftermath, WE are the ones that deal with unmanageable and overwhelming healthcare costs, WE are the ones running out of money as we quarantine and wait for them to make a decision as to how they will help us, and WE are the ones who fear that a civil war is imminent!!! This election is only going to make things worse if we don't begin to see eye to eye. It is ok to to adapt, to readjust upon learning new information, and to admit when we're wrong or have made a mistake. It's not weak to say I'm sorry, and it's important to work alongside those who have differing values and beliefs then us.

Note: this is a slightly edited message I sent to elected officials and politicians raising my concerns about the upcoming election. I believe in open-minded civil dialog, sharing ideas, perspectives, beliefs and opinions without fear of repercussion. I believe in love, compassion, and empathy, in life, liberty, and the pursuit of happiness. I believe in science, facts, and due diligence. I believe in true equality and equity for every single American citizen and human being. I believe there is hope.

Receive stories by Nikki Pants in your feed
Nikki Pants
Read next: All Lives Matter is divisive racism?