by Alfiya Laxmidhar 5 months ago in depression
Report Story 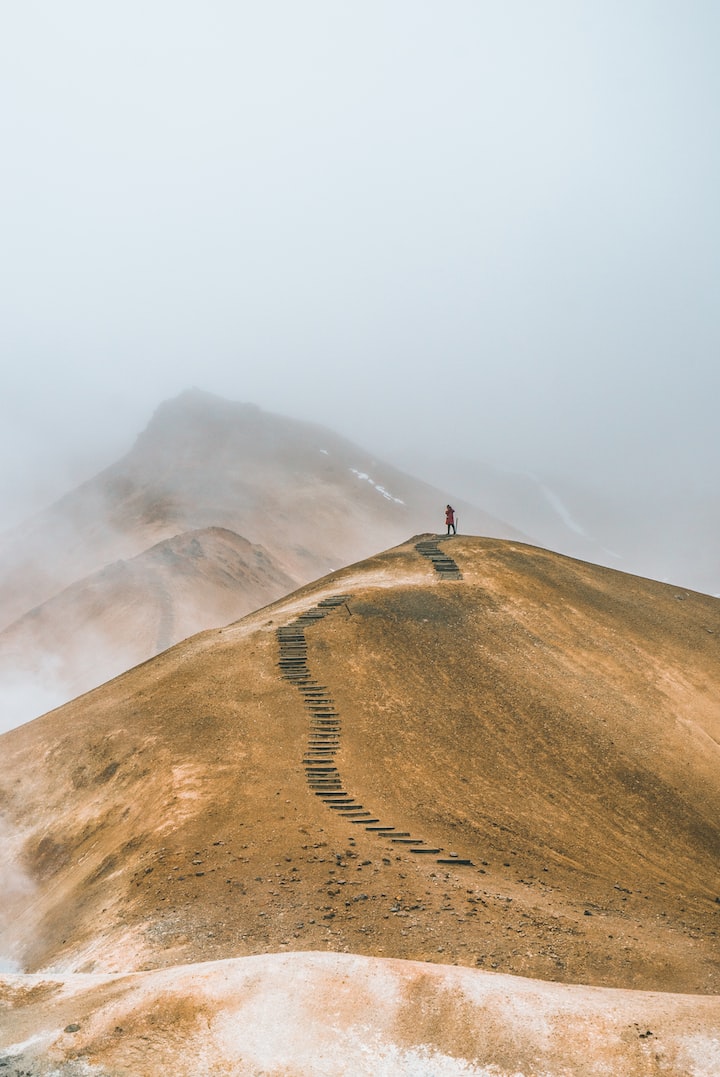 Photo by Alexander Milo on Unsplash

A path of absurdity

I have fallen again. I have fallen so many times before. It is now almost comical and it is now my own cross to bear.

The Algerian/French philosopher Albert Camus calls it absurdity. He states:

"The absurd hero's refusal to hope becomes his singular ability to live in the present with passion."

I used to think hope was beneficial to me, it was a comforting source when the world crumbled under me leaving me feeling disoriented and miserable. In those moments I did call on hope to perhaps lighten my load and there is no harm in asking for universal help, it will either come or it won't. So I did not mind hoping, though, probably deep down I knew it didn't make much of a difference.

What I knew would make a real difference and what caused me to make my way to the narrow path again was understanding that my own doing was in my own making. In my doing that didn't serve me or others was the insidious thought processes that was behind my self-sabotage. Humans are very good at self-sabotage. They have a good thing going and then out of a deep sense of unworthiness, they can really fall hard.

I would self-sabotage. It was usually all the choices I decided to take that eventually caused my fall including blaming, envying, being arrogant, assuming, judging, not listening, self-doubting and many more I am sure.

Well, now there is very little to sabotage because I've become so frail and translucent from all the times my body has hit the ground. Falling, or in the world's eyes: failing -is a good thing. Well, hitting the ground feels absolutely crap, but the part when it is time to get up and find the path again, is actually quite satisfying and rewarding. New perspectives will replace the old ones that no longer benefit you or anyone else, lessons would have been learnt so there is an increased possibility mistakes will not be repeated and healing has occurred. Being back on the path should feel like home, like syncing back into the stride that took you to every positive destination you made for yourself.

Caution with the pursuit of happiness

The pursuit of happiness was probably the mother of all tricks.

Happiness is great but when happy people become unhappy, they think something is going wrong. At least I did. I know unhappiness and it has been by my side even when my mind started to self-hate. It hated the part of me that wasn't "happy".

How is that loving?

Happiness is just a ploy that the world presents for people that are lost in this messy place and they don't know what to do. So they go on social media to make themselves better, or they take a large amount of drugs, or they book a holiday even when they don't feel like doing any of those things. It is called numbing.

You know, I have met happy people that don't like to or can't be around depressed people because it makes them feel uncomfortable. So it just makes me wonder whether the pursuit of happiness is actually serving humanity or is it really self serving.

I'm in the black hole and I don't feel fear like I used to. I quite like this feeling of zero gravity. I am free to roam but also suspended in nothing.

The narrow path of choice and decisions is simple, so simple I missed the path numerous times. But now I practiced enough to know that if I fall or fail it isn't the end of the world- but it is the end of something within me that must die. It is a self-belief that I no longer need or believe and needs to go so I no longer fall and hurt myself.

I'll keep walking upon the narrow path- where on the left lies hell and to my right lies heaven. For me, heaven is great but knowing there are people in hell is an unsettling feeling. If I am in hell, the feeling is debilitating where I cannot help others, nor myself.

The narrow path might be melancholic, but it seems like others in the literary world have felt this too.

Author and professor Julia Kristeva states this about the poetics of melancholia:

"...the royal way through which humanity transcends the grief"

I am grieving. Indeed, there is a lot happening in the world for one not to be affected by the many changes and hurt that is taking place.

Yet, in this state of melancholia, I deeply feel the hurt and pain and I can even write about it. Therefore, perhaps depression or melancholia, whatever word suits you better, is not wrong or bad but completely misunderstood.

Redefining depression, in my eyes is necessary because the stigma surrounding this state is detrimental to how people perceive their feelings. People think it is bad, cannot even verbally talk about it, the feeling and beliefs fester and people end up killing themselves because they think something has gone wrong. Yet, nothing was or is wrong with these feelings, it is a state which is darker and less shiny than what one is used to. Melancholia is not something to be afraid of, it needs to be understood.

More stories from Alfiya Laxmidhar and writers in Psyche and other communities.