by Gia Mesz about a year ago in humanity

A Story of Holy Inversion 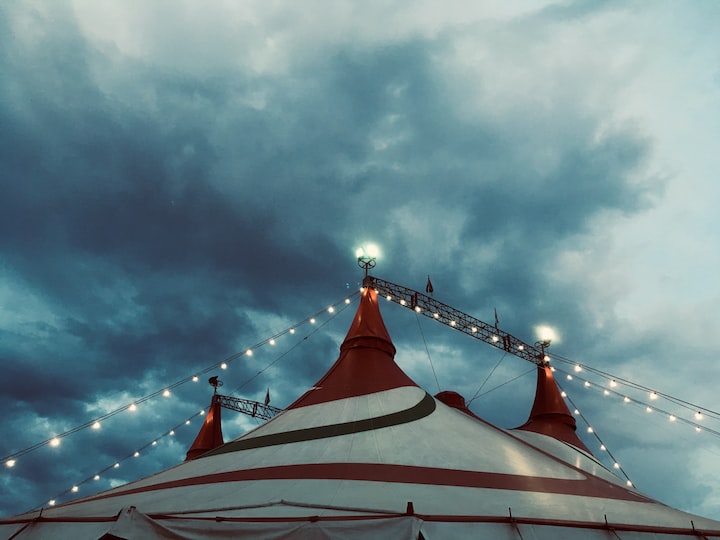 Photo by Gabor Barbely on Unsplash

On the highest place, there is no throne, but only a crown. And not a crown that should have belonged to a king, but a crown to mock a court jester. For the man was treated like a fool, face checkered all black and blue and red, and stripped down to entertain the guests. It was the main exhibition of the Festival of Fools. The moment they'd all been waiting for. The freak show that sold out the ticket box and attracted hundreds of wide-eyed, smirking, coin-fondling onlookers. Spectator's sport.

In his paper crown, the ringleader gestured to the velveteen curtain behind him with a flourish: out from its folds walked the most hideous, most beautiful creature any of them had ever seen. Tears were painted on his face, and he held a piece of roughly-hewn wood in his right hand. His gaze panned the audience; they stared back, snapping their jaws, ready to devour him.

"Ladies and gents," hissed the ringleader, his tongue lapping venomously, "the KING of the JEWS!"

The ringleader leaned in to the jester’s face and murmured, "Where is your bag of tricks now, my dear fellow? Run out of jokes, have you?"

The people chuckled and surged back and forth like a drunken man split into hundreds.

"Too bad, ladies and gentlemen,” the ringleader addressed them, “he's shy!" He wiggled his face to pantomime pity, as for a child. The man in the fake jester's crown remained placid.

Amidst the crowd, lost somewhere in the swath and the cloud of gasoline stench, I stood and watched these happenings. Suddenly I looked down at the gold coin in my hand and wondered why I was there. I was only dimly aware of the hundreds of feet groaning along the spit-stained floor, pulling me along in their torrent of impatience. The jester, wearing an unflinching look of resignation, wasn’t producing the fanfare anyone had expected.

The ringleader's eyes widened, and he suddenly grabbed the fake jester’s face and wrenched it toward the audience. Jets of spit flew forward and kissed the man's painted-up face. He blinked and winced a little, as if these tiny assaults burned his skin, but otherwise he just waited for the attacks to pause and then stared at everyone with the most freakish look— one of softness and compassion.

His gaze eventually landed on me, and my heart froze over. I looked away...

A man in the front threw a gold coin at the man. Another person followed suit. Another. Another. Without knowing why, I cast my own coin at him, and felt a shudder deep inside me when it struck his bare skin. The jester lay there, taking all of it, lying on the floor as if the weight of the tiny coins pinned him to the boards.

Not til the man was completely covered in a mountain of gold, not til we could no longer recognize him in the midst of our mess, did the audience cease throwing their riches. All fell to silence and waited for the scuttle of coins that would come as the man tried to dig himself out. My heart beat in my ears.

Moments went by. The ringleader, smirking, kicked the mountain of gold. "Come now, this is below you. No fight at all?" He looked at the audience with a twinkle in his eye. "Give the people a show, your Highness!"

For once, we goats didn't laugh. We watched the pile. There was a collective sense that something unearthly had happened, though none of us could put words to it.

Sweat gathered at the rim of the ringleader’s hat.

"Come out now," he said, trembling in his paper crown. "The joke is over." He looked at us nervously, then gave the pile of gold a good kick, and coins cascaded and rolled across the stage in a clanging mass, revealing—… nothing.

The spectators, their bloodlust stirred, were instantly out for the ringleader's head. They screamed: ”My joke, my joke, you've stolen my joke!” and stormed the stage and bashed in his head and set the tent aflame. Little did they know he had nothing to do with this final act.

I ran as quickly as I could through the mob of painted peacock spectators and grappled onto the stage. The burning tent above my head rained down ash, and the night sky, visible through the material void, provided an eerie element of order to this parade of chaos.

I reached out to touch the velveteen curtain from which the fake jester had come, and quickly retracted my hand: red paint covered my palm. It flowed from top to bottom of a new rip in the curtain's fabric.

I looked around to the other side and saw a single, white, dripping handprint, and when I touched it, I was filled at once with the purest warmth I have ever felt— I both wanted it to end, and wanted it to go on forever. I wanted to stay, and died to run away.

I did run away that night, for to experience all the beauty of that hidden world all at once was too wonderful a miracle for my eyes. But I came back often, to see the spot where the fake jester had escaped the grave of our riches, and every time I placed my hand over the white handprint thereafter, I could stand the sensation a little longer, until finally it became a pleasure to feel it. Then one day, I went to touch it and found it had been replaced by a warm, human hand, protruding from the cloth, beckoning me in.

I took hold and didn't look back. I'm where I am supposed to be now. The fake jester, the painted man, has an unpainted face here, so that I can see him for all his humanity, and he wears a real crown. His is this kingdom on the other side of the velveteen curtain, and everyone in his kingdom glorifies his name, and he is no joke himself, but brings never-ending laughter and joy.

I forget the rest.

English major, thirteen-year storywriter, constant daydreamer. Gia aspires to write all the years of her life and then to quietly retire to the Scottish countryside to become part of the local folklore.

More stories from Gia Mesz and writers in Psyche and other communities.