Smoking; a form of self harm

by Andrew Palmer about a year ago in humanity
Report Story

A journey of self discovery and mental health 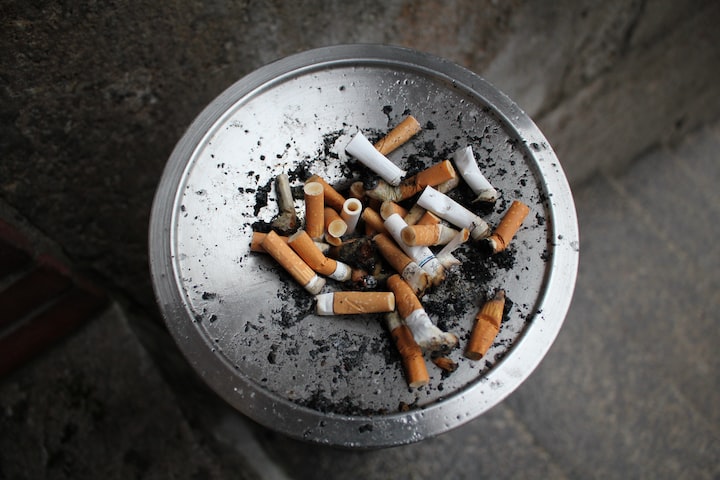 Photo by Julia Engel on Unsplash

To illusrate my statement I wanted to share my story of how I ended up both self harming and later becoming a heavy smoker and how I had come to learn that smoking is ,or what I believe is, a broader spectrum of self harm.

When I was in high school I became severely depressed, before I really knew what depressed was if I'm being honest. Around 2010 - 2011 I had a lot on my plate. Prior to the severe winter of 2010 I had come out of a heavily manipulative and physically abusive relationship and to make matters worse I jumped into a relationship which was emotionally unavailable;I poured myself into that other person due to my perspective of a lack of self worth, hoping they would pour back into me. Instead the relationship left me feeling extremely damaged when the other person cheated on me.

It didn't help that during this period of my life I romanticised depression thinking that I needed to be depressed to attract someone so extraordinary that they would magically come into my life and cure me of my sadness and complete me. Thanks to being a lonely gay male in a hetro-normative world where I had a lack of dating options, and I was so broken from my relationships and my situation that I just wanted anyone to love me and to take the pain away. I may add I was obsessed with the twilight series at the time where the 'heroine' Bella Swan believes she can't live without Edward and goes into a deep state of depression and feels like she has a black hole in her stomach which is physically painful when he leaves.

Throw in my final year of School with the pressure to get into University, the dark nights of winter, still dealing with the conflicting feelings of my parents divorce as well as navigating the waters of a relationship with a parental figure who doesn't think its okay to be gay ended up with a recipe for disaster. I was overwhelmed.

The result - I wallowed in my depression, I would spend nights thinking of how horrible my life was and how it was so unfair that I couldn't be loved and I would listen to every break up song and I was so emotionally exhausted that I couldn't even cry...it lead to me self harming. Drawing a bath and using a razor to cut my arms, some may call it a light scratch but it was the act that was significant and I did this over several days. I only told one friend at the time and luckily she had convinced me to stop cutting myself. I did in the first place because I knew of close friends who were cutting themselves and I almost wanted to experience the high of the pain. Luckily I didn't like the physical pain and I had stopped but mentally I could not get my brain to believe anything good about me. The abuse and stress from so many external factors lead to me feeling worthless for so long.

Since that day I have never physically cut myself again. However I didn't really deal with my depression and it lead to other behaviours.

When you are in university many people are introduced to a party lifestyle of drinking, smoking and drugs. And don't get me wrong its fun and I feel everyone should experience something once to make a judgement for themselves. For me however it lead to a reliance on cigarettes.

The first time you smoke a cigarette. it's horrible, the smell lingers on your skin, your mouth tastes like ash, you feel gross after, yet paradoxically you feel great and relaxed as the chemicals and nicotine kick in and you begin to say to yourself 'this isn't so bad'.

and then you reach for another

and then it becomes a habit. You no longer smoke just at parties, you smoke on your breaks at work, you smoke when you wake up in the morning, you smoke to celebrate, you smoke when you're depressed. The stress of university certainly doesn't help when you have all nighte deadlines. The temporary release from nicotine makes pulling an all nighter more bearable until you feel horrible the next day and then you rely on another cigarette and then you feel awful about yourself so you smoke another cigarette. And then you feel awful about yourself and say after this pack I'll stop....And then the cravings kick in and you feel another.

There is a constant cycle of knowing you should stop this behaviour however the temporary high makes it worth the damage you are inflicting to your body and your lungs and because it's internal you don't see the extent of damage you are doing to yourself.

It didn't help when I started working in South Africa. Cigarettes were cheap. £2 for a 20 pack. I got to a point where I was smoking daily and going through a pack every two days because of the novelty and I just couldn't stop myself. And internally I felt awful but my brain craved the nicotine.

The first time I began quitting was when I woke up and realised how addicted I was. In Mozambique instead of buying my own pack I kept pinching cigarettes from people at parties and eventually I asked someone so frequently that I could tell I was pissing them off and I was like...'Why am I doing this? I'm better than this!' my friends I was working with were super healthy and would frequently go to gym and all had bodies to die for yet I kept making excuses as to why I couldn't do work outs or I kept making up excuses as to why I couldn't give up smoking.

Fast forward to the 2020 pandemic in March.

The lockdowns and isolation forced many of us to stop what we were doing and many of us had to look internally. And I realised I hadn't dealt with my depression. From that point I stopped smoking and had to make major adjustments to my lifestyle because I wanted to change. I forced myself to work out and I forced myself to get better. and start letting go of my past traumas which I had hung onto so tightly. Which lead me to the conclusion that I was smoking so much because I didn't see my self worth. I was so depressed all the time that I was actually self harming.

When you are dealing with depression it certainly isn't easy to let go of your past traumas and it's a strange comfort to feel in a low state which is why I believe many of us self sabotage because it is familiar to feel low and it is difficult to climb out of the holes we have created for ourselves and smoking is just one form of behaviour, it can lead to heavy drinking, binge eating, misuse of money, feeling out of control, of which I have done all of the above and these are forms of self harm as well I believe.

When we want to make a change we need to start small. Look within and begin with the small steps to change our life.

My name is Andrew Palmer. I am 26 years old from Edinburgh Scotland.

More stories from Andrew Palmer and writers in Psyche and other communities.